Based on true events: a widower (Joel Smallbone) in financial straits accepts a shady job, hoping to regain custody of his daughter, and he ends up driving a truck across the country with unknown cargo. When he discovers that he is delivering two women, he is disturbed and with the help of a motel owner (David Koechner) he attempts to shut down a prostitution ring. Also with Bianca Santos, Amber Midthunder, Jim Parrack, Sarah Minnich, Jodi Lynn Thomas and Travis Hammer. Directed by Ben Smallbone. Several lines of dialogue are in Spanish and some of them are accompanied by English subtitles. [1:38]

SEX/NUDITY 4 - A man caresses a woman's face as they sit on a bed, clothed, he then kisses her neck and she pulls back, crying and saying that she will not do "that" and he grabs her and calls for her teen sister, who is brought into the room and the first woman says, "No, take me" (we see the teen girl sitting in a hallway, crying). A man sits on the end of a bed (where a woman lies under covers), straightening his shirt collar, suggesting sex recently occurred. A man sees a police officer greet a pimp as a customer and enter a motel room where a prostitute is waiting for him (please see the Violence/Gore category for more details).
► A man in a house kisses a woman on both cheeks in close-up and another man kisses a woman on one cheek in a long shot outdoors.
► A woman on a street approaches a car at the curb at night and a man inside asks, "How much?" she asks, "How long?" he says, "An hour," she says, "$100," and he says, "I was thinking $20," and she refuses and he drives away, complaining. A man pretends to hire a prostitute, paying $1,000 for an hour, but just talks to her in a motel room with the door closed; then leaving the motel room, he tells a man, "Worth every penny." A man gives another man a business card of "Party Time," telling him to call the number if he wants companionship to lift his spirits.
► A man approaches a woman on a street and takes her to a motel, where he has his wife come in and they ask the woman to leave prostitution; she cries and refuses, but changes her mind and the couple takes her to a safe house. A man reports a prostitution ring to a police officer in a town.
► A woman takes a teen girl into a bedroom set up for photography of subjects on a bed (sexual photos suggested); we do not see any photography, but later we see a wall of photos of clothed women and teen girls (some cleavage is seen). A teen girl wears short-shorts that reveal most of her bare legs to the tops of the thighs, and a tank top that reveals a little cleavage. Several scenes show one or two women wearing V-necked or scoop neck tops that reveal cleavage. A woman wears a V-necked dress that reveals cleavage and bare legs to the mid-thigh. In a brief scene in a prostitution house, several women are shown wearing miniskirts, one wears shorts that bare legs about two-thirds up the thighs, and one woman wears clingy tights that emphasize the curves of her legs and buttocks.

VIOLENCE/GORE 5 - A police officer points a handgun and shoves a man to the ground and we see another man dead on the ground with blood pouring from a hole in his chest. A man seated at a bar breaks a beer bottle over a standing man's head and kicks him in the abdomen (the man falls off-screen); we see the first man with bandages on his hand and they are spotted with blood. A police officer enters the motel room of a prostitute and another man rushes forward, pulls a fire extinguisher out of a holder, knocks on the door, and slams the end of the extinguisher into the face of the officer when the door opens (the officer falls backward and the next day, we see him wearing dark glasses and a large red bruise on his chin); the other man takes the officer's handgun and rushes away, knocking another man down, who gets up and points a handgun but lowers it. A man goes to a massage parlor and carries out a woman who was forced to become a prostitute; a gunman follows and the first man kicks him in the stomach and takes the gun. A man takes a woman to a playground to give her to another man; the other man and the woman's teen sister are there and another man with a bloody face sits on a bench, and the first man draws a handgun and shouts for kids and parents to look at him causing the children to run away screaming as a man tackles the second man who is holding a gun to the teen's head and the first man jumps on him and beats his face bloody and points a gun to his head.
► A man enters a motel office with the handgun raised in the air, and a man and a woman look surprised and run outside; the motel owner wraps the gun in a white cloth and puts it in a file cabinet. A man at a motel has a nightmare in which he sees a man showing a line of prostitutes out of a van and holding the hand of the dreamer's young daughter; in slow motion, the dreamer throws a straight back chair into the window, but it does not break the glass and the dreamer wakes up, startled and panicky. Three men go to a motel and ask to see another man; receiving no help from the motel owner, the men knock on every door, until the owner confronts them and tells them to leave. A SWAT team enters a house of prostitution, arrests a ring leader and escorts several women out of the house to safety.
► A man inspecting his truck hears crying coming from the back; he breaks the lock with a tire iron, opens the door and finds two women inside, cowering in a corner and coaxes them out. Two men drive up to a house of prostitution and enter, one man holding a handgun. A man is shown tied to a straight back chair under a light bulb in a dark room with one eye swollen shut and some blood on the side of his face; he calls his captor a murderer, saying that stealing girls' innocence kills their souls, and then that his daughter believed the lies of a man like him and was drugged and prostituted until she died before she was 18.
► A man says that another man is a hollowed out shell like a shed snake skin, but there is hope in God and the second man says, "For some people, but not for me." A man calls another man and tells him to return a woman to him or he will kill two people and make him watch. A motel owner tells a man, "Get that truck off my property." A man asks a woman to leave a prostitution ring and she refuses, saying that she cannot leave her teenage sister there and that, "If I leave, they will hurt her."
► A man visits a cemetery and puts flowers on his wife's grave (we do not hear how she died). We see a memorial plaque for a man who was killed while helping two women escape their captors. A driver falls asleep at the wheel of a box truck at night, awakens, swerves off the road to avoid another truck, and stops in grass.
► A man hands an empty, grimy drink cup in close-up to a gas station clerk and says he knows the washroom is still locked (it is implied that the first man used the cup for urination). A motel clerk spits into an empty plastic drink bottle, but we do not see spittle. A man takes two women to a truck stop washroom to wash up, telling them, "You both kind of stink."

SUBSTANCE USE - A prostitute says that she met a man online and then met him in person and that he drugged her and when she woke up in the back of a delivery truck she was forced into prostitution. A man pours two small glasses of wine and dinks some of his before forcing a woman to drink from the other glass and she grimaces, a man at a bar drinks beer from a bottle and another man holds a bottle of beer, two men drink from short glasses of whiskey and one man holds a beer bottle in a bar, a man picks up a short glass of whiskey in a bar but does not drink, and a man carries a woman who has trouble walking to a cab and tells the driver that she had a little too much to drink (she had not been drinking). A man smokes a cigarette in two outdoor scenes.

MESSAGE - Every human life is priceless. 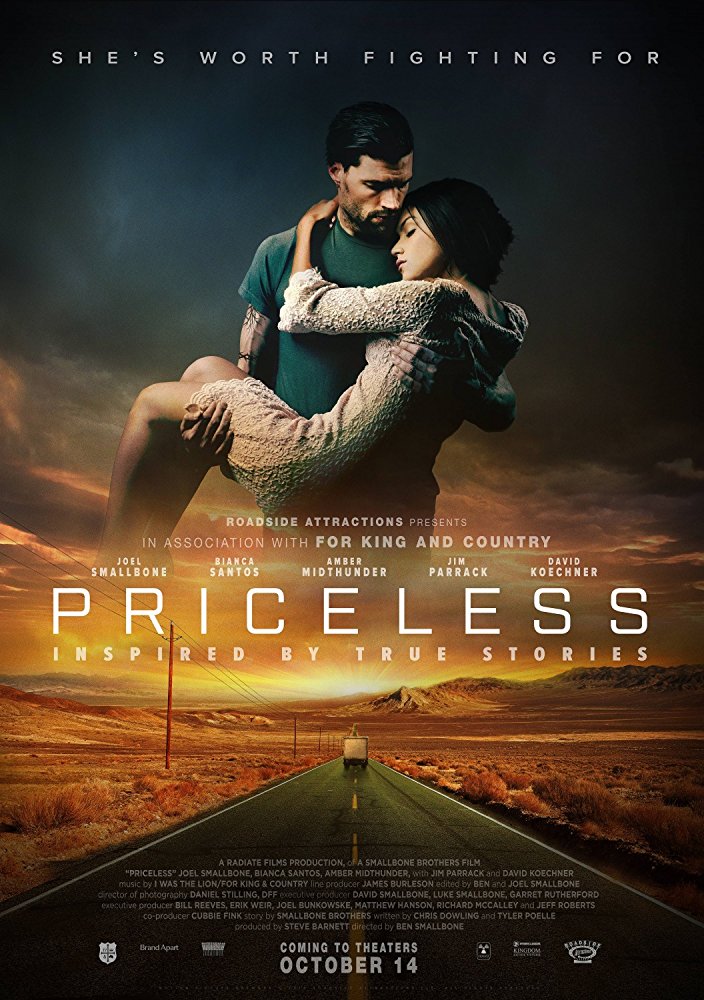