Animated version of the popular children's book by Chris Van Allsburg about a young boy who is struggling with his faith in Santa Claus, since all his friends and family insist that Santa is a figment of our collective imagination. However, one Christmas Eve night the boy is taken by the Polar Express train to the North Pole where he is presented with some rather convincing arguments for believing in the spirit of Christmas. Tom Hanks provides the voice of the Polar Express conductor. Also with the voices of Daryl Sabara, Eddie Deezen, Nona Gaye and Michael Jeter. Directed by Robert Zemeckis. [1:40]

SEX/NUDITY 0 - Men and women elves dance together, and a boy and a girl hug.

VIOLENCE/GORE 3 - A boy climbs along the outside and roof of a speeding train, he finds a man, and they walk across the top of the train; the boy slips, falls and grabs onto the side of the train, and the man lifts the boy up, and they ski along the top of the train, until a tunnel forces the boy to jump into the coal car. Three children walk across exposed train tracks, high above water, and one child slips and nearly falls. Three children climb into a pneumatic tube and are launched at great speed through a chute (we see their faces stretch from the G-force), and they fall onto a huge pile of gifts, they are closed up into a giant gift bag and are lifted into the sky. A train barrels toward tracks that have been frozen over by ice, it slips across the ice out of control, a girl is nearly thrown off the train and the ice begins cracking behind the train, but the train gets back on the tracks just as the ice breaks beneath it. A train car breaks free and rolls along tracks through a town, and a man sitting on top of the train is knocked off when it enters a tunnel (he seems to dissolve into particles). A train approaches a very steep downward grade, and a man and two children stand at the front of the train holding onto the railing as they speed down the hill (it has the feel of a rollercoaster). A boy tries to cross between train cars (we see the track speeding below the connection). A boy pulls the brake on a train causing it to stop quickly, throwing several children around in one of the cars. A man trying to fix the light on a moving train slips and grabs onto another man's beard causing him to scream (he dangles from the man's beard for some time and the man continues to scream). Also, a man tugs on a man's beard and he screams with every yank. A train stops just short of hitting a herd of caribou that is grazing by the tracks. A potentially scary scene shows a train car full of abandoned and tattered toys: a boy is left in the car alone and a marionette with an unpleasant face lunges at the boy and yells loudly at him. A large bag drags across a star atop a tree causing the star to fall toward the ground, the people on the ground scatter except for one who falls and one point of the star pushes gently against his nose. Elves jump from a vessel that's flying in the sky and parachute to the ground. A gust of wind blows a ticket out of a boy's hand, and he reaches for it as it blows away from a speeding train. A boy talks about a girl being thrown off a train. A boy runs and jumps onto a moving train. A boy burns his arm on a radiator. A loud rumbling in the distance gets closer and begins to shake a house, and we see an enormous train pull up in front of the house. A boy is awakened and goes to investigate a noise downstairs. A man yells at a boy. A man appears perched on the top of a train and then disappears in a cloud.

MESSAGE - Seeing is believing. There is no greater gift than friendship. The true spirit of Christmas is in our hearts. 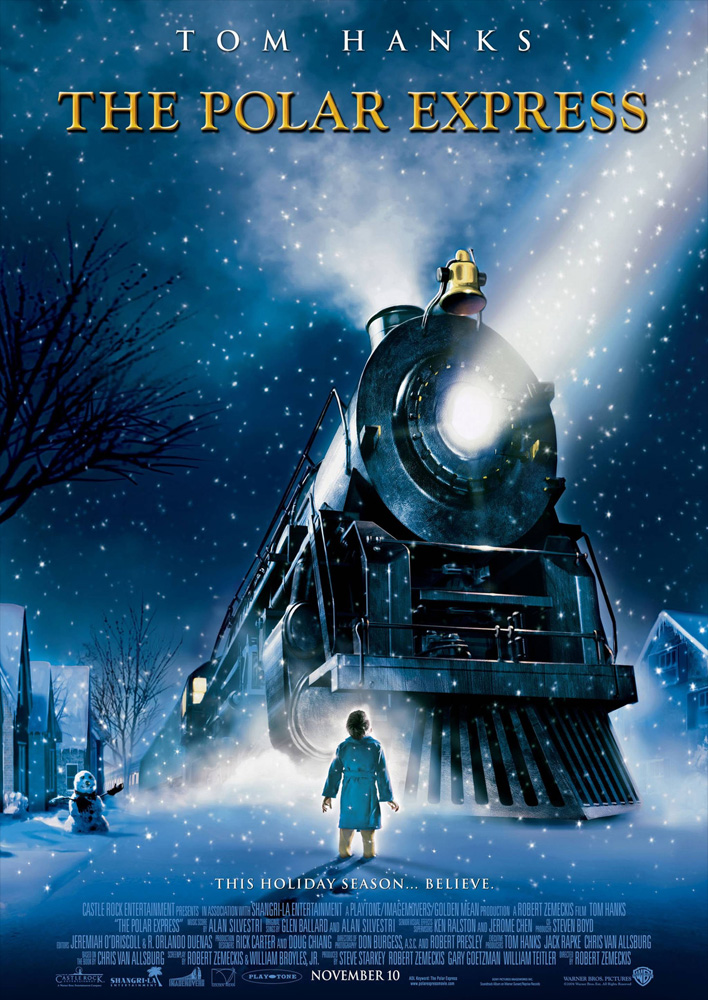