Why is “The Photograph” rated PG-13? The MPAA rating has been assigned for “sexuality and brief strong language.” The Kids-In-Mind.com evaluation includes a sex scene, an implied sex scene, several kissing scenes, an unplanned pregnancy, discussions of love and relationships, and several cleavage revealing outfits; discussions of the death of an estranged parent, a brief funeral scene, several arguments and a power outage during a heavy storm; and at least 1 F-word and other strong language. Read our parents’ guide below for details on sexual content, violence & strong language.” When a renowned photographer (Chante Adams) unexpectedly dies, her estranged daughter (Issa Rae) has many unanswered questions. When she finds an intriguing letter with a photograph and begins researching her mother’s early life, she begins to fall in love with a journalist (LaKeith Stanfield) who is writing about the photographer. Directed by Stella Meghie. A few lines of dialogue are spoken in French without translation. Also with Chelsea Peretti, Teyonah Parris, Kelvin Harrison Jr., Rob Morgan and Courtney B. Vance. Directed by Stella Meghie. [Running Time: 1:46]

– A man and a woman enter a dimly-lit bedroom where they kiss and the camera cuts to the couple in close-up with bare shoulders and arms; we then see the man’s bare back as he appears to be thrusting and the scene cuts to the woman straddling the man in bed (we see her face looking down, and his face and chest as he looks up); she then rubs his chest and abdomen and she rolls off, they lie together, she caresses his beard and the scene ends.
► A woman wears a long dress with spaghetti straps that reveals cleavage and the edge of one nipple is outlined in the seam over one breast. A woman wears a jacket that is buttoned at the waist (we see deep cleavage), a woman wears a strapless long dress that reveals cleavage, a woman wears a long opaque sleeping gown with a V-neckline that reveals cleavage in a couple of scenes, and a woman wears long dresses with spaghetti straps, revealing cleavage. A few women at two social events wear tops with necklines that reveal cleavage and one bare shoulder. A woman wears an off-the-shoulder top and short shorts that reveal bare shoulders and legs to the tops of the thighs.
► A man and a woman kiss for several seconds, embrace, enter a dimly-lit bedroom where they begin to undress (we see the man wearing a sleeveless undershirt that reveals his arms and shoulders) and facing away from the camera, the woman drops her dress (we see her bare back to the upper buttocks) and the scene cuts to morning when we see the couple in bed under a blanket (sex is implied).
► A man and a woman kiss three times for several seconds in one scene. A man kisses a woman’s cheek. A woman kisses a man’s cheek. A man and a woman kiss in a restaurant for several seconds and he holds her chin. In two scenes, different couples hold hands briefly. A man and a woman in a club embrace and dance closely for several seconds. A man and a woman lie clothed under a blanket on a sofa bed at night; she gets up and sits in a chair as he sleeps.
► A twenty-something woman tells her mother she will spend the night with a man and the mom tells her she should find her own place to live. A man tells a woman that when he was 23, he dated a woman aged 42 who wanted sex all the time and could not get enough of him. A woman tells a man that she broke up with her boyfriend when he proposed to her. A woman refuses to marry her live-in boyfriend twice and leaves town; she later hears that her boyfriend married someone else and we later see the first woman with her young daughter, suggesting the woman was pregnant when the boyfriend married someone else. A woman visits a man and tells him that he is her father; he looks shocked and then tearful. A young girl tells a woman that her boyfriend is going to marry someone else; she asks him about this the next day and he says he broke up with the woman two months ago. A man says that another man is “thirsty,” meaning that the second man wants to have sex.

– A woman reads a letter from her deceased mother and learns that the mom left the family years ago because she had cancer; she re-reads the letter and cries. A woman hears by phone that her mother died and the scene cuts to a brief longshot scene of an open casket in a funeral home (we do not see inside the coffin).
► A mother and her adult daughter argue briefly in three scenes. Two men argue in two scenes. A man and a woman argue in two scenes.
► A power outage in a NYC apartment building sounds a buzzer alarm and people leave in the rain to find other shelter; through windows, we see high winds blowing loose material from a line or building, heavy rainfall and we later see trashcans lying on their sides along a street, along with downed tree branches.

The Photograph SUBSTANCE USE

– Several men and women in several party and two tavern scenes hold glasses or bottles of beer as well as cocktails and glasses of wine, four men and five women sip from beer bottles, wine glasses and short whiskey tumblers, men and women in an office hold drinking cups (suggesting alcohol) and a few sip, a woman pours whiskey from a bottle into two short tumblers at home and she and a man sip from them, and a woman gets two beer bottles from a refrigerator at home (no one drinks).

– Love can happen when least expected and is worth the work needed to maintain it. 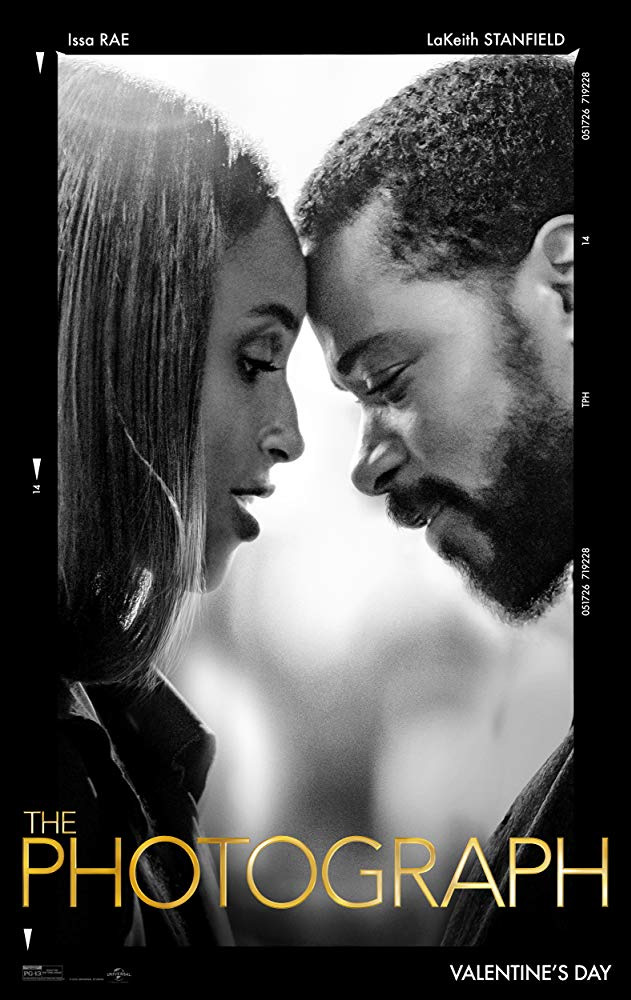