Billy Crystal and Bette Midler star as grandparents who are tasked with taking care of their three grandchildren when their daughter and her husband (Marisa Tomei and Tom Everett Scott) go away on vacation. In the process, they struggle to accommodate their parenting style to what the children are used to. Also with Bailee Madison, Joshua Rush, Kyle Harrison Breitkopf, Jennifer Crystal Foley, Rhoda Griffis, Gedde Watanabe and Tony Hawk. Directed by Andy Fickman. [1:44]

SEX/NUDITY 3 - A husband and his wife kiss in bed; she is wearing spaghetti strapped pajamas. A husband and his wife kiss in a few scenes. During a baseball game, a camera pans the stands for couples kissing (called the "Kiss Cam") and we see a man and a woman kissing. During a baseball game a message is shown on a big screen asking a woman to marry a man and the camera pans to the couple as she accepts and they kiss; an announcer makes a derogatory remark about the woman's appearance and that the man must be sight impaired.
► People dance at a party and a husband and his wife dance close to each other. A pre-teen boy flirts with a pre-teen girl and she giggles.
► A woman wears a low-cut top that reveals cleavage. A woman wears a low-cut sweater that reveals cleavage. A woman panics when she sees her pre-teen daughter wearing make-up and a party dress that reveals her upper back. Several women do a pole-dancing workout in a woman's living room and we see the instructor wearing short shorts.
► A man is searched in airport security and he says to his wife, "He's not done groping yet" and "What are you looking for sailor" and that "I can help... as he turns his head and coughs. A man makes a snide remark about his son-in-law breastfeeding his grandchildren. A man struggles to unfasten his grandson from his car seat and says, "This is harder than one of your grandma's bras." A girl makes kissing sounds to another girl after a boy invites her to a party. A husband tells his wife, "You look good in cake" after she has cake smeared on her face, hair and clothes. A woman is told about her husband, "I don't think he wants you in clothes." A man talks about "melon grabbing" while announcing skateboarding moves. A man on a video screen talks suggestively to his wife who shushes him because their children are watching. A man talks about a woman in baseball park stands and refers to her as a "hottie" and that the man that she is apparently with "scored." A father tells his adult daughter how she "got girlie" on him when she was young.
► A boy wants to wear his mother's red high heel shoes to school and his grandfather bribes him not to.

VIOLENCE/GORE 3 - A boy runs to the top of a skateboard ramp and urinates over the side (we see the urine stream); a man on the ramp jumps into the air and nearly hits the boy, then slides down the ramp and falls off his board (no injuries are shown). A boy runs out of a house chasing his imaginary friend, and the boy's grandfather chases the boy toward the street and grabs him before he is struck by a car; the boy screams and says that his imaginary friend was struck and killed (the boy describes the pieces of the friend being scattered around the road).
► Several parents in the stands of a T-ball game argue and threaten each other and one woman tells another, "I will bust you up," and another woman breaks out in hives; on the field a boy hits a man in the crotch with a baseball bat and the man bends over and vomits on the boy's face (we see the goo leave the man's mouth and we see it on the boy's face).
► Several pre-teen boys surround another boy who stutters and tease him. A boy yells at another boy and we later see the boy who yelled with a black eye; the boy later tells his grandfather, "I hit him first" and the other boy's "little sister did this." Several people ride skateboards on large ramps and flip into the air.
► A man and his grandson watch a "Saw" movie and scream (we see a brief scene from the movie of a man wearing a clown mask and riding a tricycle).
► A man mixes food on a boy's plate; the boy becomes angry, yells at the man and runs from the table calling the man names. A boy squirts his grandfather in the crotch with a squirt gun and then says, "Farty wet his pants..." A boy paints his grandfather's face while he is asleep (the paint does not completely wash off later). A man is kicked in the shin while he and his grandchildren play kick-the-can in the rain; they slide around in the mud and the grandfather falls into the mud with the grandmother and they kiss (the woman has a bloody nose, but is OK).
► A pre-teen girl tells her mother, "I hate you and I wish anyone else was my mother." A husband and his wife argue. A woman yells at a girl about practicing her violin. A woman threatens her granddaughter's violin teacher and says, "There will be nothing left of you but a little red hair and an accent." A man climbs over a railing and falls on the floor of a theater where a concert is being performed to chase his grandson; the two charge through the theater disrupting the audience and the man yells at the boy, and when the man finally catches the boy he holds him across his knee on the stage and raises his hand to spank him (he does not). A man confronts his grandson's speech therapist and says, "They are doing anything but speak." A boy overhears his grandfather telling his speech therapist that he has seen no improvement and becomes upset. Grandparents give their grandchildren super-soaker water guns and their mother says, "We don't do guns."
► A man gives his two grandsons cake and leaves the room and we later see the boys and the kitchen smeared with cake as the boys scream and run around maniacally; a girl and her mother wrestle over the cake in a box and the girl yells, "You lied to me, yogurt does not taste like ice cream." A man and a woman prepare breakfast and lunch for their grandchildren and we see the messy food and food on their hands.
► There are several references to the "Saw" movie series and that a young boy wants to watch them. A man introduces an organist as "The late Gwen... on the organ." A man says "there's no cure for dumb." A woman says, "They disapprove our parenting." A woman says, "Make him eat dirt." A man says that he asked his grandson if there's "any hope of normal." A woman talks about "impending doom." A man says his son is "constipated" and another man says, "I've got some stuff that will blow your mind." A woman says of her son, "He's hyperventilating." A man says "Your feet smell like cheese."
► We see family members gathered around a hole in the ground and a boy places a box in the hole (they are burying the boy's imaginary friend); the boy pours milk on the box and throws soy dogs in the hole.
► A woman breaks out in a rash and scratches after talking about her parents (we see a red rash on her chest). A boy is frightened when his grandfather gives him a bobble head of himself. Several references are made to a boy's imaginary friend that is a kangaroo. Three children beg their parents not to leave them with their grandparents; one pulls on the mother's sleeve. A man is fired from his job and he is very upset about it.
► A man takes his grandson to a public restroom and the boy resists sitting on the toilet (it is very dirty); we then see the man sitting on the toilet with the boy sitting on his lap and we hear a plop when the boy is successful. A T-ball announcer talks about a boy "stopped to pick his nose" and we see the boy with his finger in his nose and then showing his finger to other boys.

SUBSTANCE USE - A woman drinks a glass of wine in a couple of scenes, a beer is poured for a man, a grandfather says, "I need a martini and it's only 9 AM, people drink alcohol at a bar, and a man talks about "getting bombed." A grandmother talks about smoking when she was young, and a man is shown with a cigar in his mouth.

MESSAGE - If you give up on your dream, you are giving up. Old-fashioned parenting techniques do have their place. 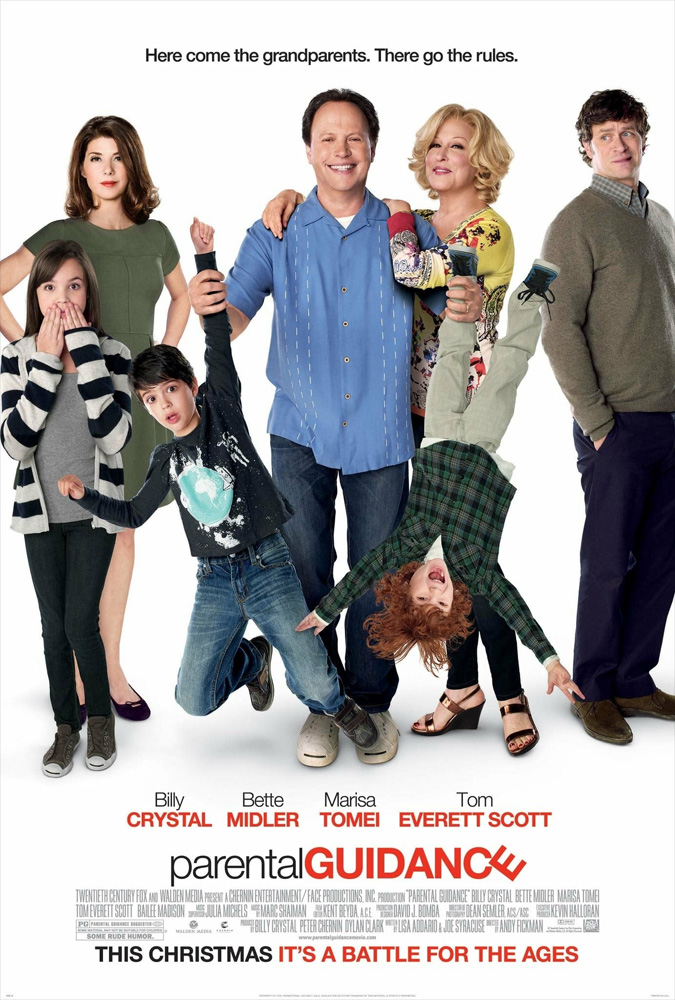