Why is “Official Secrets” rated R? The MPAA rating has been assigned for “language.” The Kids-In-Mind.com evaluation includes an implied sex scene under covers with movement and sounds, and a few hugging and kissing scenes; a couple of scenes of warfare with bombs being dropped on a city and the aftermath and with some bloody bodies shown, many arguments, discussions of the law and the legality of entering into a war without following the prescribed steps, and a near deportation; and nearly 30 F-words and other strong language. Read our parents’ guide below for details on sexual content, violence & strong language.” Based on the true story of a British Intelligence whistleblower (Keira Knightley) who leaked a classified national security memo spotlighting illicit methods employed by the US to convince UN Security Council members to vote to go to war in Iraq in 2003. Also with Matthew Goode, Indira Varma, Katherine Kelly, Ralph Fiennes, Matt Smith, MyAnna Buring and Rhys Ifans. Directed by Gavin Hood. A couple of lines of dialogue are spoken in Japanese with English subtitles. [Running Time: 1:52]

– We hear giggling and rhythmic thrusting and see some movement under a heavy comforter; a man and a woman kiss and we see their bare shoulders and his bare back briefly and the scene changes (sex is implied). A husband and his wife hug and kiss in a few scenes. A man kisses a woman on both cheeks in greeting. Two women hug.

– We see many large explosions during bombing raids in Iraq; we see the aftermath of the bombings and bloodied bodies are shown on streets, and a small body (presumably a child) is wrapped in a cloth and placed in a coffin.
► A man is handcuffed and taken to an airport where he is led to a line of many other people waiting to board a plane and to be deported (he is released at the last moment). A woman is escorted out of an office and led to a police vehicle where she is transported to a jail and locked in a cell after confessing to leaking classified documents. A woman is padded down and taken into a witness box in a courtroom where a judge questions her about her plea. A man enters his home and finds several other men routing through his possessions, and he yells at them and demands to know where his wife is.
► A man confronts a woman in an office setting and yells at her calling her a name and she cries. A judge yells at and questions an attorney for the prosecution in a courtroom. Men yell at each other in a few scenes. Two men argue over a case. A husband and his wife yell at each other in a couple of scenes. A woman seems nervous and anxious in an office environment when everyone is questioned about the leak of a highly classified document. A man and a woman meet in a dark parking garage to exchange information. A woman stands in a witness box in a courtroom as a judge asks her for her plea. We hear about a surge in the surveillance of UN members. We hear that a man underwent a lie detector test. We hear about a gag order and that it was lifted. We hear that a man “was taken” and that he is “scheduled for deportation.” A man tells another man to go fish somewhere else when he makes a remark about “making an example” of a woman.
► We read that between 151,000 and 1 million Iraqis were killed in the 2003 Iraq war, 4,600 soldiers were killed and 37,700 soldiers were wounded. We hear discussions of whether Iraq had weapons of mass destruction before an invasion. People discuss the 1982 invasion of the Falkland Islands by the British army. People in a government intelligence setting discuss governments preparing to “fix” a vote in the UN. We hear that people are active in an anti-war movement and we see large crowds of people protesting against war. People discuss biological warfare.
► A woman runs to the bathroom and vomits (we hear gagging and retching but see no goo).

– When illegal activity is unearthed by whistleblowers, they are the ones that end up enduring consequences. 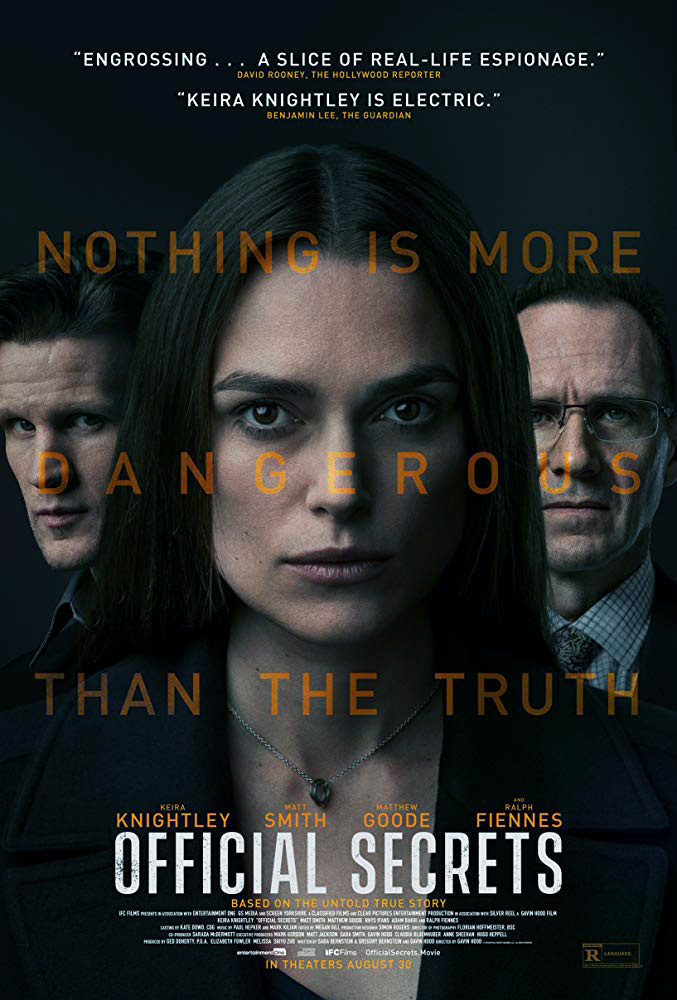