Animated feature from the folks behind "Toy Story" about an alternate world where mostly benign monsters reside. These are the monsters who scare, but do not harm, little kids. The monster world is turned upside down when a little girl is inadvertently transported there. The monsters are terrified of a child's touch since they think it is poisonous, while unscrupulous monsters plot to control the power supply (made up of children's screams) in the Monster world. With the voices of Billy Crystal, John Goodman, Mary Gibbs, James Coburn and Steve Buscemi. [1:32]

SEX/NUDITY 1 - A male and female monster flirt and kiss briefly. A monster kisses another monster a couple of times. There are a few romantic references made by one monster about an evening he has planned for his monster girlfriend.

VIOLENCE/GORE 4 - The monsters that we see throughout the film are varied in shape, size and creepiness: some monsters have many eyes, some one eye, some have many legs, one has crab legs, one slithers and can become invisible, one is furry with horns and claws, one has snakes in her hair, some fly, some are huge and some are tiny. A girl is strapped into a chair and a "scream extraction" machine approaches her face while she screams and wriggles. A boy is shown falling asleep in a darkened room, the closet door creaks and opens and the boy imagines that a shirt is a monster; then a pair of large eyes open under his bed and a big-toothed monster comes out causing the boy to scream, which then causes the monster to scream and fall back onto on the floor; small metal toys (jacks) get stuck on his bottom (this takes place during a practice session, and the boy is a robot). A monster is beaten up by another monster, hit with a tank, slammed into a wall and held by the throat while he's struggling for air. A monster does a really big, scary growl for a demonstration and frightens a girl who runs away in tears (we see images of his face later, with teeth and claws bared). A decontamination team is deployed to locate and capture a girl, and they are seen again trying to clean up the scare factory. A monster has a human sock stuck to his back: he's tackled by a decontamination team, the sock is removed, placed in a containment dome and incinerated; the monster is then shaved and we see him with bandages and some scratches. A decontamination team jumps on and tackles another monster, and another, and another. A monster slams a monster against a wall, yells at him and bends his arms (we hear a cracking noise). A monster releases a door that two monsters and a girl are clinging to; it falls a great distance and crashes to the ground. Three monsters and a girl ride on a fast moving conveyor belt high over the ground, roller coaster-style -- there are a couple of near falls. A girl hits a monster with a bat and a monster hits a monster with a shovel. A monster goes looking for a girl in a bathroom and slams open the stall doors. A monster and a girl enter a dark hallway that leads to a secret room where a bad monster has a scream extraction machine. Two monsters are shoved through a door (they are being banished) where they meet the abominable snowman (he initially appears as a dark shadowy figure). A monster thinks a girl has been smashed in a compactor and he faints from despair. Monsters prepare to go scaring; they put on their sharp teeth, test their claws, growl, put on more eyes and then go through doors, and we hear children screaming. A monster is shown with a scream extractor machine sucking at his mouth (we see his very red lips after the machine is stopped). A monster is trapped in a box, wheeled to a secret room, strapped into a chair and a scream extraction machine is powered up and inches toward his face. A monster breaks down a door to get at a monster and a girl and when he reaches them he yells at, threatens and hits the monster. A monster scares another monster who flips in the air and lands on the floor. A restaurant full of monsters panic when a girl comes in. A monster is scared by a girl who comes through her closet door to the monster's world; she clings to his back, he runs back through the door crashes into a mobile and drags a bunch of her toys back through the door. A monster sleds down a snow covered mountain and crashes. A monster jumps up and lands on a beam between his legs. A monster comes back through his door screaming that he was almost touched by a child. A monster slams a window on another monster's hands and he yells. A girl sneezes on a monster and he sprays himself with something that makes him scream when it gets in his eye. A little boy monster bites another monster's hand. A monster flies into a garbage can, a pile of books dump into his mouth and something lands on his head. A monster yells at another monster, grabs onto his tail and drags on the floor behind him. A monster tackles another monster and yells at him. A monster yells at another monster and we see she has bruises and bandages on her face. A monster practices growling, a monster sneezes and sets his newspaper on fire (he blows fire), a slime monster slips through a grate in the street, a slug-like monster leaves a trail of slime. There's a conversation about a girl being a killing machine. A monster throws snow balls at another monster (in two scenes), a monster punches a wall in frustration and a shard of ice falls to the ground. A monster holds on to his car door handle and another monster pulls on his legs. During the opening credits we see sketches of monsters with large jaws and teeth and long arms with claws hiding in and popping out of closets. A monster takes a girl to the bathroom where she uses the toilet while he waits outside the door.

MESSAGE - Laughs are much more powerful than screams.

(Note: There's a short which precedes the movie entitled "For the Birds": a flock of birds gather on a power line and a larger bird tries to join them; the small birds peck at each other and there's some teasing back and forth between the smaller birds and the large bird (in chirps). The large bird ends up dangling from the wire and when it lets go the smaller birds are catapulted through the air leaving their feathers behind. We see them featherless when they hit the ground.) 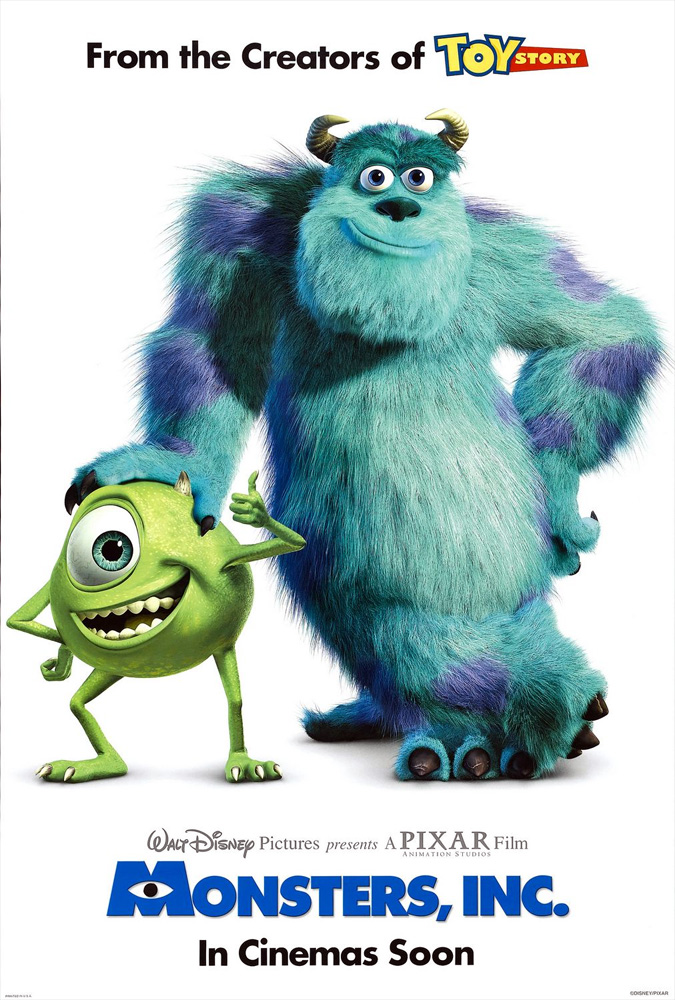