SEX/NUDITY 6 - We hear a married couple through a door pretending to be a carpet cleaner and a housewife during a sexual encounter; the man makes cleaning remarks that could be construed as sexual, another man opens the door and we see the woman with whipped cream on her breasts and the man with his face covered with whipped cream. A man lies face down on a massage table, a woman takes off his shirt (we see his bare chest and back) and begins to rub his back: she climbs on top of the man, rubs down his back and around under his stomach (she makes a remark about feeling "driftwood"), she continues to massage him and she looks like she is thrusting, when the woman's son enters the room and says to the woman, "you were riding him like Seabiscuit." A woman teaches elderly couples about sexual positions: we see men lie on their backs, women straddle the men, and then thrust. A man and a woman hug, kiss and caress each other in several scenes. A man and a woman hug and kiss in several scenes. A woman caresses another woman's ears and the woman appears to be sexually stimulated. A woman acts out a sexual encounter with hand puppets. A man takes his wife by the hand and leads her to an RV and it is implied that they have sex. A man makes provocative remarks about his fiancée's mother. A man and a woman bump their hips together and he pats her buttocks when celebrating a successful football play. We see a woman in labor in a hospital, with her legs propped in stirrups (we see her bare thighs), and a man has his hand between her legs while checking her dilation (he holds up two slime-covered fingers). A bus rides alongside an RV, the driver of the RV honks his horn, the bus passes revealing a sign the reads "honk if you're horny," and women on the bus lift their shirts showing the lower part of their bare breasts (no nipples), and one person moons the RV showing bare buttocks. A woman says that her husband is a "sexual dynamo." A man makes a comment about having had sex with his wife earlier in the day. People discuss when they lost their virginity. A woman talks about senior sexuality. A man says, "I conceived him with one testicle" and proceeds to explain why he has only one. A dog thrusts against a woman's leg and a man makes a comment about the dog's anatomy, a dog thrusts on a hand puppet in the shape of a man and we hear rhythmic squeaking, and a dog thrusts on top of a cat. A man straps on a fake breast (it looks very lifelike) and prepares to feed a toddler. A man holds up a fake breast to show a crowd of people. We see many sculptures of parts of the human anatomy and nude men and women with bare breasts, pubic regions, phalluses, couples engaged in sex acts, as well as books covering sexual topics (orgasms, etc.). A woman tries on a slinky dress that hugs her form and shows the outline of her nipples. A toddler motions with his hands and mouth that he wants to nurse when he sees a woman's ample cleavage, as well as when he sees a billboard of a woman with ample cleavage, and when he sees women on a bus lifting their tops to reveal bare breasts. A man opens a shower curtain to step out of the shower and another man is sitting on the toilet with his boxers around his ankles. A woman wears a low-cut, tight-fitting dress that reveals cleavage, bare shoulders and back in several scenes. A woman says, "I got a boob job." A man kisses a woman's hand, and a man hugs two men and kisses their necks. A man puts his arm around another man's neck and kisses his head.

VIOLENCE/GORE 4 - A man is shot with a taser gun, he falls to the ground and writhes. Another man is shot in the chest with a taser gun, and he falls to the ground. A man shoves a man, who then picks him up and throws him on the ground (the man on the ground is injured). A man kicks a man in the nose. A man injects another man in the neck with a syringe. A man threatens to fight a man. A police officer slams a man to the hood of a car, then another man, and puts them both in handcuffs. A man passes out on a stage (we hear him hit the floor hard). A dog chases a cat, the dog falls in a toilet, the cat flushes the toilet, and the dog swirls around and goes down the toilet pipes; a man hits the toilet bowl with a fire extinguisher until it is loosened from the floor and he pulls the dog out (we see the dog covered with blue liquid and later his coat is stained blue). A toddler head butts a man (we see the man's nose bleeding) and cries when the man yells. A man lies on the ground in front of an RV in order to keep it from driving away. A toddler changes the TV channel and watches "Scarface" (the "Say hello to my little friend scene"). A woman picks up a bit of dried skin, is told that it is foreskin, and, startled, she drops it into a fondue pot. A woman talks about her son's circumcision not having been completely successful. A man kicks another man's leg under a table. A man throws a brick at an RV, and the brick bounces off the side and crashes into the windshield of a car shattering it. A toddler squirts glue on a floor and plays with it. A man practices martial arts. We hear toilet flush and a cat leaves the bathroom.

LANGUAGE 4 - Many uses of "Focker," which is pronounced like the F-word, 15 sexual references, 13 scatological terms, 24 anatomical terms (many of which are uttered by a toddler), 4 mild obscenities, a few insults, 1 religious profanity, 9 religious exclamations.

SUBSTANCE USE - People are shown drinking.

MESSAGE - Admitting when you make a mistake can be the most important thing. 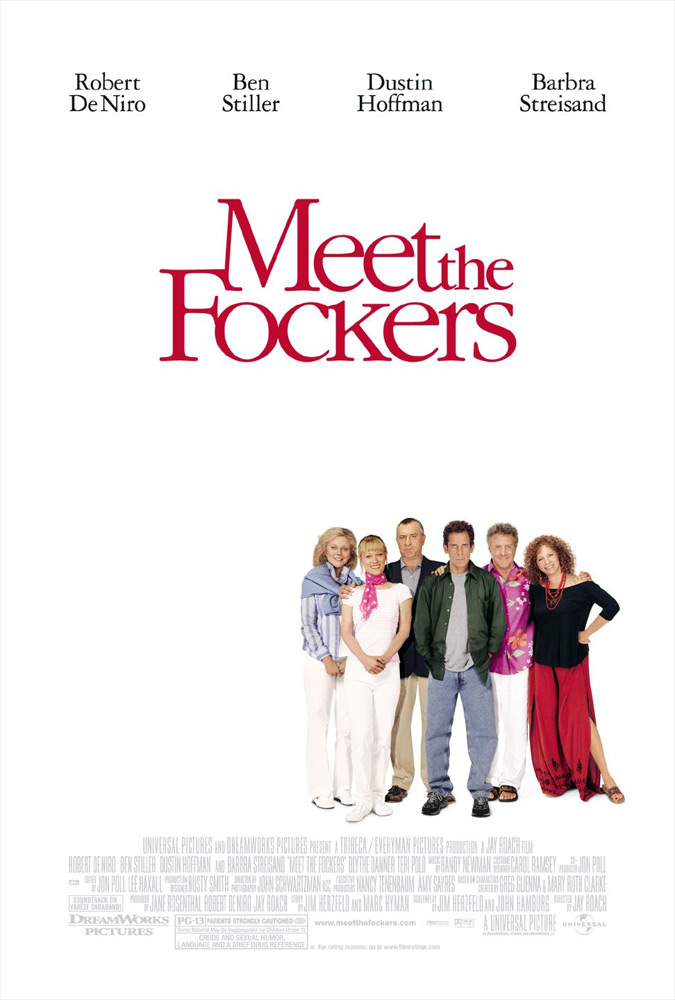