Why is “Me Time” rated R? The MPAA rating has been assigned for “some sexual material, language and brief drug use.” The Kids-In-Mind.com evaluation includes a few scenes of implied sexual activity, pornography on a computer screen, non-sexual nudity, a violent encounter that leaves a man’s hand injured, a tortoise injured by a truck, a fall from a mountain without injuries, a mountain lion attack leaving a bloody wound, property damage, and at least 7 F-words and other strong language. Read our parents’ guide below for details on sexual content, violence & strong language. A harried househusband (Kevin Hart) relaxes when his wife (Regina Hall) and kids go on vacation. Then he meets up with an old friend (Mark Wahlberg) and they have several misadventures, but he must put things right before his family returns. Also with Luis Mendez, John Amos, Anna Maria Horsford, Michelle Deshon, Andrew Santino and Ilia Isorelys. Directed by John Hamburg. A few lines of dialogue are spoken in Spanish and Hebrew without translation. [Running Time: 1:41]

– A man’s wife and young daughter come into a room and find the husband looking at a pornographic movie of a woman taking off her blouse to reveal a bra and some cleavage; the girl asks why her father is naked and her mother says, “Daddy’s just playing with himself,” as they leave hurriedly and the wife apologizes to her husband for interrupting.
► A fully nude man in a desert stands facing away from the camera twice (we see his bare back, buttocks and legs as well as his bare chest briefly twice). A snapshot shows several men shirtless and wearing gold-colored pants. A large photo of a nude man with a birthday sign covering his genitals is seen on the roof of a bus. At an outdoor party in the desert and at a swimming pool in a city, many women wear skimpy thong bikinis or bra tops with short-shorts (we see cleavage, bare shoulders, abdomens, lower buttocks and legs); several men are shown wearing mid-thigh length shorts (we see bare chests, abdomen and backs). Two women and a man in a swimming pool are shown and the women are wearing bras that reveal cleavage and abdomens and another woman wearing a bra and underwear (cleavage, bare abdomen, legs and back are seen) jumps off a second-story roof in a long shot, misses the pool, hits a bush, and peeks out to say she is OK. Several women at a strip club gyrate while wearing skimpy bikinis; one woman leans over a man and he looks surprised. A man gets undressed in his bedroom after dancing shirtless and using his T-shirt to run through his legs at the crotch several times (we see his bare chest, one thigh, and one lower leg). A man at a party puts his hands down his pants for several seconds to straighten his shirt. A man in a cell phone GIF moves his hand in the air to simulate masturbation.
► A man and a woman kiss briefly a few times.
► A woman says she has written an erotic novel and gives a copy to her son-in-law; the cover includes a woman wearing a low-cut dress that reveals cleavage. A woman tells her husband, “Pull your pants down”. A man says his company provides condoms to India to eliminate STDs.

– A loan shark confronts a man and threatens to kill him and maim his fingers, and has a woman use a hammer to hit another man’s pinky finger below the screen (the victim screams and we see a discolored finger, but it is fine in the next scene); the woman knocks down a man and uses a giant flamethrower to burn down tents and a papier-mâché statue at an outdoor party (we see several fires burning as people shout and leave on a bus).
► Men wearing wing-suits on a mountaintop prepare to skydive, but one man falls off the mountain; someone yells for him to spread his arms and this slows his descent until another man catches up with him in the air and they glide safely to the ground, holding hands.
► Men and women carry machetes to forage for food in a desert and carry 5-gallon buckets for bathroom needs; one man sits on a bucket (we see no flesh) and a mountain lion cub approaches him, the mother lion follows growling, and chases the man several yards, jumping on him and they roll around together as the man screams until he takes a large hypodermic needle from his pocket and stabs the lion in the neck; the lion falls and staggers away as if drugged (we see three deep bloody gashes on the man’s back and he faints, but awakens and we next see him wearing a bandage around his chest and one shoulder).
► Two men steal a large tortoise, but change their minds and put it down, only to accidentally hit it with their SUV; one man gives it mount-to-mouth breathing and spits something unseen to a point off-screen, the men take it to an animal hospital, set it by the door, ring the bell, and run away as a medic comes out and shouts (we later hear that the animal is OK and we see it walking and wearing a wide bandage around its body).
► A golf ball seems to hit a woman in the abdomen as she ducks, but she gets up and is OK. A man shouts in fear as he sees another man covered in what looks like blood and a third man holding what looks like a saw; the third man explains there was a mishap with a blender, and strawberry daiquiri got on everything (we see the messy, overflowed blender). Two men and a woman break into a house, break some dishes, and knock over some items without breaking them; one man and the woman push each other. A man hosts a large party and his house becomes a mess of empty food and drink containers; he throws the people out and has to clean up by himself. A pickup truck loudly runs over a man’s SUV three times and destroys it as the owner shouts (he later gets a new car from his insurance company).
► A husband and his wife argue several times, often quite loudly; the woman takes her elementary-school aged children and leaves, then calls the man and tells him she is returning and he needs to leave, so he does. Two men argue several times, end their friendship, but later reconcile. A young boy screams and cries over his broken and expensive Lego statue. During a school talent show, a young boy and his father argue loudly on stage, but both apologize after.
► A man at a picnic overeats and vomits several gallons of brown material, three times. A man enters his house and flatulates loudly for several seconds and a woman holds her nose and walks outside. A man on a yacht rubs a cooked lobster and table utensils inside his trousers on his genitals and buttocks, and replaces the items on a banquet table. A man picks up several large kitchen utensils and sticks them down the front and back of his trousers, rubbing them on his genitals and buttocks before replacing them in drawers. A man enters a bedroom, crouches on a bed, pulls down his pants (we do not see flesh), and the camera cuts away and back to show a small blob of feces on the bed. A woman enters a bedroom and comes back out saying that she defecated on a bed (we do not see anything). A woman at a presentation sips hemp milk and spits it back into the glass. Two men facing away from the camera urinate into a swimming pool and we see two long streams of urine.

Me Time SUBSTANCE USE

– A man at a party snorts white powder from the glass of a framed picture (he says it is ADHD meds and not cocaine) and he speaks very fast, a man tells a woman at his house party to stop smoking (we cannot see clearly whether she has a tobacco or a marijuana cigarette), and a man gives an Epi-Pen to his wife for their son (we do not see him use it). Two party-bus scenes and a house party scene show men and women sipping from beer bottles, as well as cocktails and chugging shots of tequila, two men at a bar each ask for and drink a shot of tequila, glasses of wine are seen on tables at a banquet (no one is shown drinking), and a woman sips wine at home.

– Everyone needs some time to themselves. 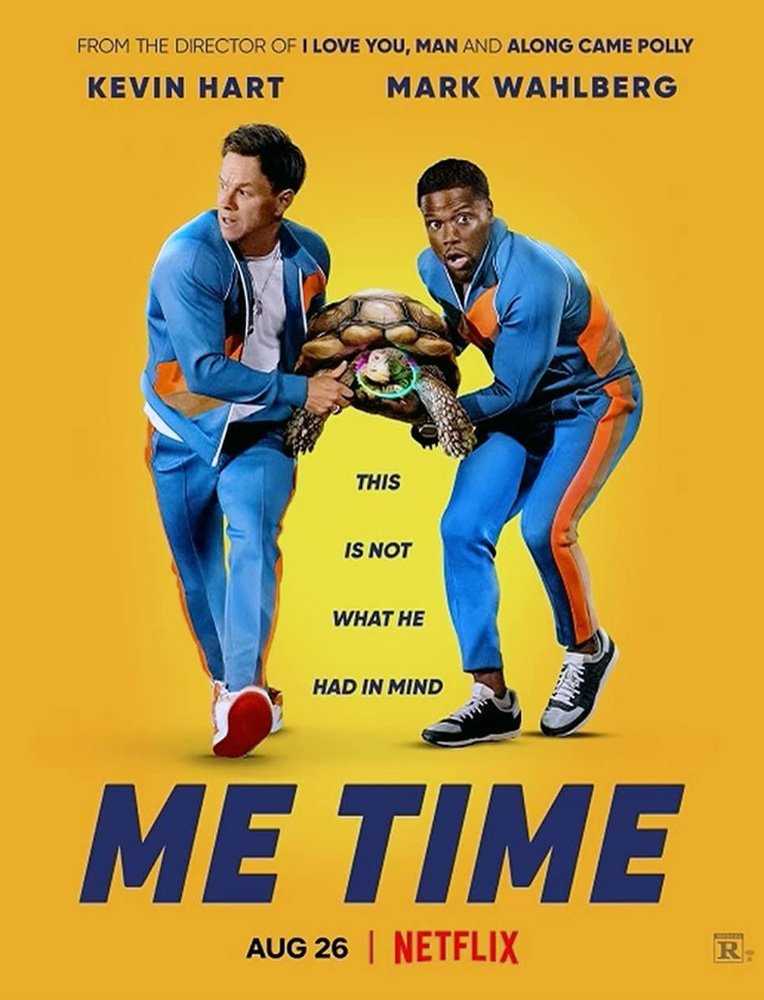