Based on the autobiography of Nelson Mandela, from his childhood in a small African village to his 27-year imprisonment by the white-minority apartheid government to becoming the first democratically elected president of South Africa. With Idris Elba, Naomie Harris, Terry Pheto, Deon Lotz and Jamie Bartlett. Directed by Justin Chadwick. [2:19]

SEX/NUDITY 4 - A man kisses a young woman; they kiss passionately and we see the man pull up the young woman's shirt and run his hand down her leg and prop her against a doorway (sex is implied; we later see the man confronted by his wife when he tries to kiss her on the cheek). A man and a woman kiss; the man is sitting down and the woman straddles him (they are both fully clothed) and they continue to kiss passionately as they recline (sex is implied).
► Several men, young men, teen boys and boys are seen in a hut and they appear to be fully nude (their genitals shaded and unseen) as they put paint on their bare bodies (one young man's bare buttocks are seen in profile); we later see this group running into a river (no genitals are visible), and the men, young men and teen boys are nude (their bare backs and chests are visible). We see a group of men stripped down to their underwear as several guards tell the men to strip out of their old clothing. A group of men are forced by shouting guards to strip down to their underwear while in the pouring rain (we see their bare backs and chests). A man works out while wearing his underwear (his bare chest and back are visible). A boy wears a wrap around his waist (we see his bare back and chest). We see several boys wearing wraps around their waists (their bare backs and chests are visible). A group of young boys are seen wearing shorts and are shirtless (their bare chests and backs are visible). Two men are seen shirtless, boxing for exercise. A shirtless young man is seen in a street. We see a man in the shower and he is seen from mid-chest up (his bare back and partial chest are visible). A woman is seen wearing a long, full-coverage nightgown, but is obviously not wearing a bra. A woman appears to help another woman dress (no nudity is visible as the woman puts a final wrap on top of a dress).
► A man and a young woman kiss passionately, they recline on a bed and he slips his hand up her skirt until she grabs his hand and pushes it away, saying that she is saving herself for marriage.
► A woman hugs a man from behind and the man proposes to the woman; they kiss, hug, then kiss and hug again. A man and woman dance together and kiss briefly. A man and a woman kiss. A man and a woman kiss and the man places his arms around her shoulders. A man kisses a woman. A man and a woman kiss. A man kisses a young woman. A man kisses a woman on the forehead. A man and woman hug. A man dreams of a woman lying next to him in bed.
► A woman is obviously horrified when a pair of underwear are held up in a court and a man asks the woman if she could identify the underwear as belonging to her. We see an older man show photographs of his wife laughing and flirting with another man.
► A man tells an older man that he can allow his wife to stay over in a house where he is in house arrest under, and the older man tells the man that his wife is not interested in staying in a prison. A man jokes with a woman, saying that legally he can "have relations" with a woman because she is the same race and they kiss lightly.

SUBSTANCE USE - Several men are seen with wine and cocktails, three older men toast with champagne, a man has two bottles of what appears to be liquor on a table (he is not seen drinking), a man appears to be intoxicated and another man teases him asking if he can go home on his own after holding up multiple fingers and asking the man to count (the man is later seen vomiting from what we believe to be drunkenness). Throughout the movie we see men smoking cigarettes, we see a man smoking a cigar, a man smokes a tobacco pipe, a man offers a young woman a cigarette and she turns it down saying she does not smoke.

MESSAGE - Nelson Mandela's life was very eventful and hard but he prevailed. 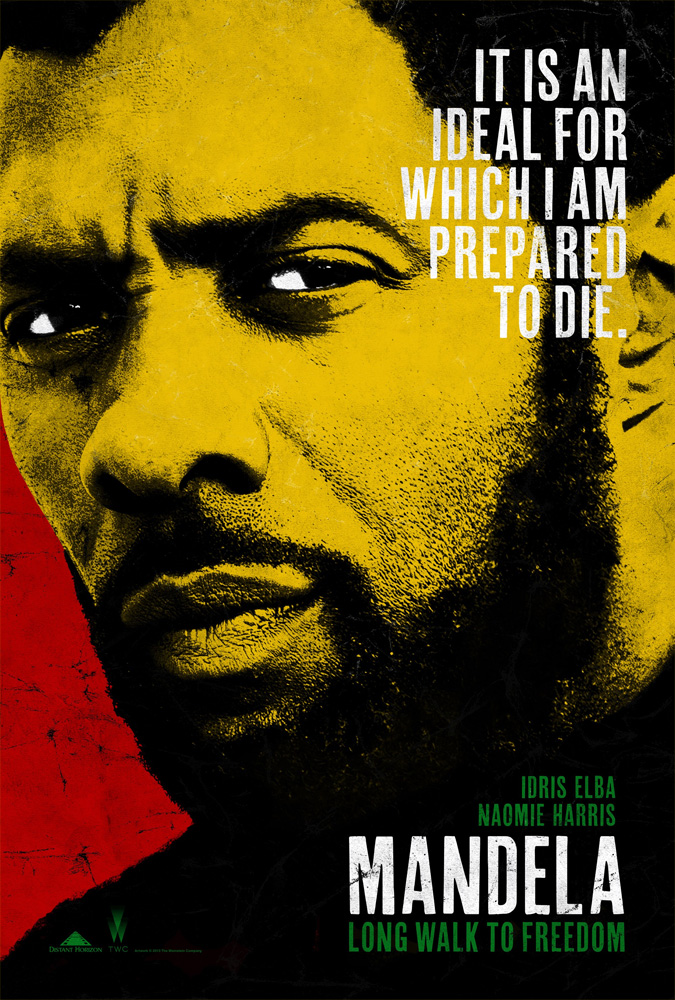