Why is “Love in the Villa” rated TV-14? The TV Parental Guidelines Monitoring Board rating indicates that “this program contains some material that many parents would find unsuitable for children under 14 years of age.” The Kids-In-Mind.com evaluation includes a couple of kissing scenes, some non-sexual minor male nudity, many arguments, several practical jokes that lead to an allergic reaction to cats as well as yelling and a brief time in jail, and some strong language. Read our parents’ guide below for details on sexual content, violence & strong language. After a breakup, a woman (Kat Graham) travels to Italy, where she has reserved a villa that celebrates Romeo and Juliet. On arrival, she finds an irritating man (Tom Hopper) double-booked into the same place and he won’t leave, while his obnoxious fiancée (Laura Hopper) makes the awkward vacation even more dreadful. Also with Raymond Ablack, Sean Amsing and Emilio Solfrizzi. Directed by Mark Steven Johnson. Many lines of dialogue are spoken in Italian, French and German with English subtitles. Several Italian songs in the background have Italian lyrics without translation. [Running Time: 1:55]

Love in the Villa SEX/NUDITY 2

– A man and a woman hold hands briefly in one scene and in another scene, they move closer to each other and nearly kiss, but pull away. A man and a woman embrace and kiss for several seconds. A man kisses a woman on both cheeks.
► A woman hugs a man briefly. A man dances closely with a woman, who smiles. A man and a woman dance closely for several seconds.
► A man tells another man that he has a wife and also a girlfriend. We hear that a woman went into labor, but do not see her. A woman says that her parents were always making out, like dogs, embarrassing her. A man tells a woman that his parents separated because his father was very much in love with his wife and worried too much about her leaving, and she couldn’t tolerate the tension.
► A woman wears knee-length dresses that have thin straps and square necklines (cleavage is visible) in several scenes; in bed alone in one scene, she wears a deeply cut nightgown that reveals cleavage. A man wearing only his boxer shorts (we see his bare chest, abdomen, back and legs to the upper thighs) stands in a room as a woman enters and they both scream.
► In a traditional act, a man places one hand over a female statue’s right breast (clothed) and makes a wish as a female friend covers his hand with her own; we later see another man with his hand on the statue’s breast.


Love in the Villa VIOLENCE/GORE 3

– A man and a woman are double-booked into a villa and neither will leave; after a loud argument, they play several harsh practical jokes on each other: A woman lets cats into the villa (the man is allergic) and the man screams until she puts them out, and the woman covers the man in olives that cats like and lets the animals in (we see the man the next morning as he moans and his face is covered with a rash and sores); a man pastes copies of a woman’s diary on a wall outside the villa and she is enraged at the intrusion into her privacy, especially the details on how her boyfriend dumped her; a woman changes the lock on the villa door, and the man climbs onto a window ledge and falls, clinging to a balcony until the police show up with drawn pistols and put him in jail overnight; and, a man cooks a mushroom dish, tells a woman that it is horse meat, and she gags and spits it into a napkin (we do not see the chewed food) and this leads to a food fight with screaming, broken plates, and a broken window, although not much food lands on either person (police officers come and warn them to stop arguing or they will land in jail for a long time).
► A man is startled when asked to feed a frozen mouse to a pet snake, and we see a terrarium with a snake that is not moving; he later drops a frozen mouse into the container, the snake moves, but does not eat the mouse. An infant on a plane screams continually and a child kicks the back of a woman’s seat, upsetting her drink. A man with a brown gelato bumps a woman and sloshes the gelato on her notebook cover. A woman steps into a street and is swarmed by speeding scooters — she screams, but is not struck. A taxi driver laughs, shouts at other drivers, and swerves in and out of traffic, sending a couple of passengers sliding across the back seat and looking scared in several scenes; no collisions or injuries occur, although we hear screeching tires several times. A staircase in an apartment building is full of cats that hiss and scare people who then shout in a few scenes. A man hits himself in the face with a door and we hear a loud thud, but he is unharmed.
► A woman breaks down and cries loudly for two or three minutes, speaking in a squeaky voice after a man says sarcastic things to her. A man and two women argue for several seconds, and the man and one of the women rush outside, she shouts and walks away. Two men and two women at a restaurant table argue until one man takes his date and leaves. A man and a woman argue loudly in several scenes. A man and a woman argue briefly, they break up, she returns her engagement ring to him, and he runs outside. A man and a woman argue briefly in a restaurant, he breaks up with her and she leaves. A man gives a woman an engagement ring, she breaks up with him and returns the ring; he is startled. A man snores loudly on a couch.

Love in the Villa LANGUAGE 4

Love in the Villa SUBSTANCE USE

– A man says he is a bit drunk and staggers after drinking wine, two couples at a restaurant table sip from glasses of wine and we see two bottles of wine opened and poured in close-up, a woman chugs a glass of wine and refills it to the brim before ordering another bottle and a straw, a woman drinks wine with a straw and becomes dunk (she slurs her words, says that she is drunk and staggers outside with help from her date), a man has several bottles of wine on a counter at home and tastes a small amount from one bottle, a man pours wine for himself and a woman and they both sip from their glasses, many men and women at a wine tasting party hold glasses of wine and we see a few people sip from their glasses, a man takes a woman to tour a wine cellar with many large barrels of wine and pours a glass for each of them that they sip, several scenes include a man and a woman sipping wine on a balcony at a restaurant table as well as in an outdoor café and at a kitchen table, a few glasses of wine are seen on tables in a bar but no one drinks, and a woman in a hotel room pours a glass of wine and sips from it.

Love in the Villa DISCUSSION TOPICS

Love in the Villa MESSAGE

– True love can be a combination of destiny and choice. 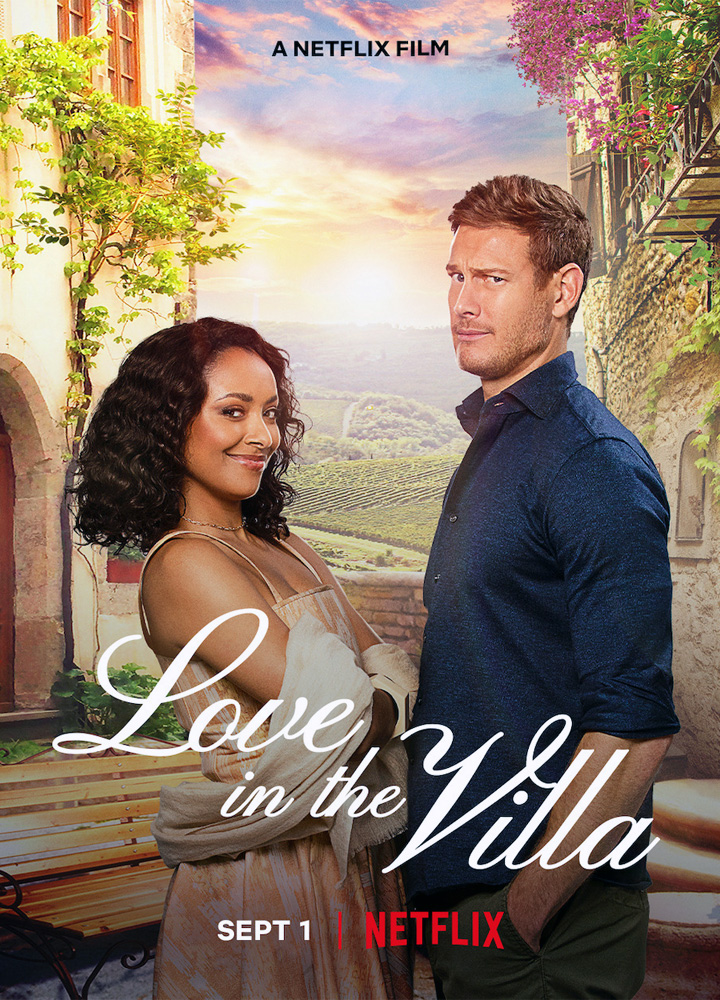