Why is “Lost Girls” rated R? The MPAA rating has been assigned for “language throughout.” The Kids-In-Mind.com evaluation includes many scenes of women wearing revealing outfits, we observe the discovery of several bodies and the skeletal remains of one body are seen, there are discussions of murder and serial murder, discussions of bi-polar disorder, many arguments and references to police disinterest in the murders of sex workers, discussions of sex workers and about 20 F-words and other strong language. Read our parents’ guide below for details on sexual content, violence & strong language.” A desperate mother (Amy Ryan) pesters law enforcement officers to find her missing daughter (Sarah Wisser) and detectives discover a wave of unsolved murders of female sex workers on New York’s Long Island, committed by a serial killer. Inspired by real events. Also with Thomasin McKenzie, Lola Kirke, Oona Laurence, Dean Winters, Miriam Shor, Reed Birney, Kevin Corrigan and Gabriel Byrne. Directed by Liz Garbus. [Running Time: 1:35]

– A woman wears short shorts with a deeply cut V-neck blouse that reveals cleavage. A woman in a laptop photo wears a skimpy bra and bikini bottom and we see her bare shoulders, arms, cleavage, abdomen and upper thighs. Women in several scenes wear tight pants that hug their thighs and lower legs. A party scene features several women wearing sequined bras and bikini bottoms as they dance and writhe to music while standing very close to men; one woman also wears a garter belt and stockings.
► A man tells a female employee that he reduced her work hours in favor of another woman, “Who smiles”; the first woman walks away, saying, “I bet that’s not all she does.” We hear that four female sex trade workers were murdered and wrapped in burlap bags. A man says that parties in this town usually include prostitutes. A woman says that she got her younger sister into prostitution and she was murdered. We hear that a third prostitute left a client’s house, screaming and running along a road at night. We hear that prostitutes in New York advertised on Craigslist. A woman says that she was very young when she had a child and gave her away when the child developed a serious mental illness.
► A man rubs a woman on the back and she looks scared. A woman stands on a sidewalk at night and gets into a client’s car.

– A woman sees a line of police vehicles, backhoes and other vehicles with flashing lights on a road and follows them to a marsh where they are looking for a body; she gets out of her car and shouts angrily, she identifies a wallet that was found in the mud and we see a close-up of the skeletal remains of a woman in a fetal position (we see the bones of the spine, legs, pelvis, arms, the jaw that is fitted with a surgical plate, and some dark hair attached to the skull); we later hear that the victim was beaten by her boyfriend and needed surgery that included the plate, and a caption states that an autopsy found strangulation and no evidence of drugs in the body.
► A police officer lets his K-9 dog out of his vehicle and walks after him, discovering something we cannot see; the area is searched later and we hear but do not see that four bodies were discovered, killed by strangulation (we see one small flap of burlap in some brush); we see a police officer carrying a paper grocery bag and hear that there are bones inside it as a woman angrily demands to know the bag’s contents but receives no answer.
► We see a woman running from a client’s house late at night, whimpering and crying in one scene and two flashbacks. A woman meets a man one night, gets into his car nervously, he drives her to a marshy area where they walk through the brush and he says this is a dumping ground for bodies of women; they peer into a house and see rolls of burlap and rush away when car headlights appear.
► A woman receives a phone call from a man asking for her missing daughter; the woman calls the police, and when they seem disinterested, she goes to the police station, demanding that they do something. A woman is reported missing when she does not show up for dinner at her mother’s home.
► A man who hired a prostitute that was murdered is arrested and placed in the back of a cruiser, but we hear later that he was cleared and released; a later scene is accompanied by a caption that states that a woman sued a doctor for the wrongful death of a prostitute. We hear that a string of murders has never been solved and no suspects were arrested. A caption states that a schizophrenic woman went off her medications, had a psychotic break and murdered her mother. We hear that a teen girl is seeing a psychiatrist. We hear that a preteen girl ran outside in the snow, naked, and often pushed her fingers down her own throat to vomit until her mouth bled (she was suffering from bulimia). We hear that a man has an examination table in his living room, and that he takes in prostitutes as “wayward girls” looking for help, kills them, and buries them in a marsh behind his house (we see none of this). A woman’s driver tells police that she was acting irrationally and ran away after he found her inside a client’s house on her hands and knees, crying. A man says a dismembered body was discovered, with some pieces matching bones in an evidence bag from 1996. A TV broadcaster states that more than one murderer is likely to blame for a series of 10 killings. A man says that he saw a young woman and that she was, “Pretty well drugged up,” and she cried out, “They’ll kill me” before running away. We hear several seconds from what is described as a woman’s 23-minute call to 911, and we hear her screams, sobs, and shouts. A woman threatens to drive through the police commissioner’s front yard and in another scene, threatens to go to the media for help. We hear that a woman had bipolar disorder. A woman tells her teen daughter to stop acting out, like lighting paper towels on fire in a restroom (we don’t see this) and the girl shrugs. A woman argues loudly with her two teen daughters in several scenes. A woman shouts and curses at police detectives in half a dozen scenes. A woman angrily yells at her male boss. Several women at a dinner table argue briefly. A woman argues briefly with a younger man. A woman and a teen girl cry in a van in different scenes.

– A woman removes a pill from a prescription bottle and hands it to a teen girl off-screen (we see the girl fidgeting on a chair and lying on a sofa in other scenes), a man lights and puffs on a marijuana cigarette in close-up, five prescription bottles are shown on a counter top next to an empty knife holder, and we hear that psychiatric medications are expensive. A woman drinks from a beer bottle at a dimly-lit bar, a woman carries an empty wine glass out of a room, a party scene shows several empty wine glasses on a table (no drinking is shown), three empty beer cans are seen on a table as a woman pops open a beer can and the scene ends, and a woman chugs an energy drink. Five women smoke cigarettes in different outdoor scenes, and a pool hall looks hazy but we see no one smoking.

– The disappearances and murders of all women must be taken seriously. 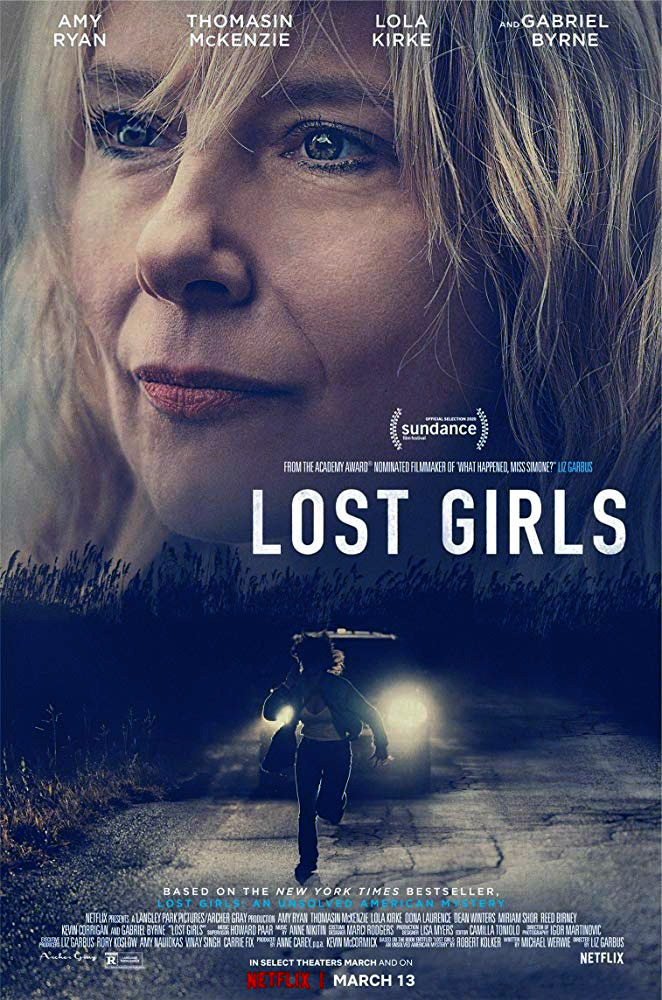