Why is “Look Both Ways” rated TV-14? The TV Parental Guidelines Monitoring Board rating indicates that “this program contains some material that many parents would find unsuitable for children under 14 years of age.” The Kids-In-Mind.com evaluation includes an implied sex scene with partial nudity that in one scenario leads to pregnancy, several kissing scenes between two women and men and women, a man and a woman having an unplanned baby, many heated arguments about parenting and unexpected pregnancies, several breakups, and at least 1 F-word and other strong language. Read our parents’ guide below for details on sexual content, violence & strong language. When a college student (Lili Reinhart) is about to graduate, her life splits into two different future paths, and as she inhabits them both with their ups and downs, she must choose the one she really desires. Also with Danny Ramirez, Aisha Dee, David Corenswet, Luke Wilson, Nia Long and Andrea Savage. Directed by Wanuri Kahiu. [Running Time: 1:50]

– A man in a library asks a woman to have sex and the scene cuts to the couple falling onto a bed while kissing; the man removes his shirt (we see his bare chest and abdomen) and the woman removes her blouse (we see cleavage and her bra) as she says, “We’re just friends”; the man lies on top of her, they kiss, and they roll over on one side as the scene ends (sex is implied).
► A woman kisses her girlfriend goodbye before the latter leaves early one morning, and a man and another woman stare at them as if shocked. A man and a woman kiss for several seconds and hug in several scenes. A man and a woman kiss briefly and hug in several scenes.
► A woman gives another woman two pregnancy tests: the second woman sits down on a toilet (below the frame) and holds the test sticks as if to place them between her legs (we do not see them); she pulls them above the frame and we see they are negative and the woman is happy, and in another similar scene, the sticks read positive and she is sad.
► In an OBGYN office, we see two women sitting, each with a large pregnant belly. We see a woman’s bare abdomen in close-up as an ultrasound wand rubs over it (we see no gel). Three scenes show a pregnant woman with a growing belly. A woman says she is having contractions and a man drives her to the hospital where we see her sitting and lying in a bed, groaning loudly and grimacing; she finally cries and yells, we hear a baby cry off-screen, and we see a baby in a blanket placed into the woman’s arms. A woman holds to her chest what looks like a breast pump attached to a plastic line leading into a machine (her chest is completely covered).
► A woman breaks up with a man and keeps their baby; she tells him to start dating and reluctantly he does and marries another woman, whom we see pregnant later. A man and a woman become upset when she says she is pregnant, and both of them say, “We used condoms!”
► Several scenes include a number of twenty-something women wearing short-shorts, a few mid-thigh length skirts, crop tops and sports bras that reveal bare abdomens and cleavage, and low-cut ball gowns (we see cleavage, shoulders and backs).

– An older couple, a younger man and a younger woman, argue with one another for several minutes, sometimes shouting. A man and a woman argue with each other, sometimes heatedly and they break up, he becomes engaged to another woman, and he and his ex argue briefly a few more times; in a split timeline, he tells his ex-girlfriend that he is married and expecting a child, and in a companion scene, he says he broke up with her and he and his ex get back together. A woman’s boss is harsh with her and she quits. A woman staying away from home calls her toddler on the phone and finds out that the child has been left overnight with a babysitter the mom does not know; she picks up her child and shouts at her ex-boyfriend who left the child alone with the unknown sitter, shouting for several seconds and takes the unharmed child away. A woman screams “roach” and runs away from her bed, but we do not see any bugs.
► A woman cries loudly over the phone while talking to a man whose connection is intermittent. A woman cries and sobs in a few scenes because she is pregnant. A woman tells her adult daughter that crying is normal because of pregnancy and because she is mourning the loss of herself when she was single and not pregnant.
► A man asks a woman to move in with him and she says she is scared and cannot do that; they argue, he looks sad, and they part ways. A woman plans to move in with a man but he cannot do so since he is moving away for work for up to a year; she looks sad and they break up, but reconcile months later.

Look Both Ways SUBSTANCE USE

– Two women smoke a marijuana cigarette together and slur their words. A woman in a washroom drinks two shots of whiskey and then pours a shot for herself and another woman and they both drink them, a woman drinks part of a glass of tequila, a man holds a glass of beer, a woman sips from a glass of wine, a man and a woman at a bar sip from bottles of beer, a woman in a restaurant sips wine and a man sips from a glass of whiskey, two women at a café each have a glass of wine on their tables and a man at another table also has a glass of wine (no one drinks), many men and women at a party hold red cups that indicate liquor contents, a woman in an office hands a large bottle of whiskey to a man who does not open it, a woman in a house hands a bottle of wine to a man who opens it and pours a glass for himself and another woman and they both drink, and a man in a kitchen opens a can of beer and a woman holds a large glass of wine (neither drinks). 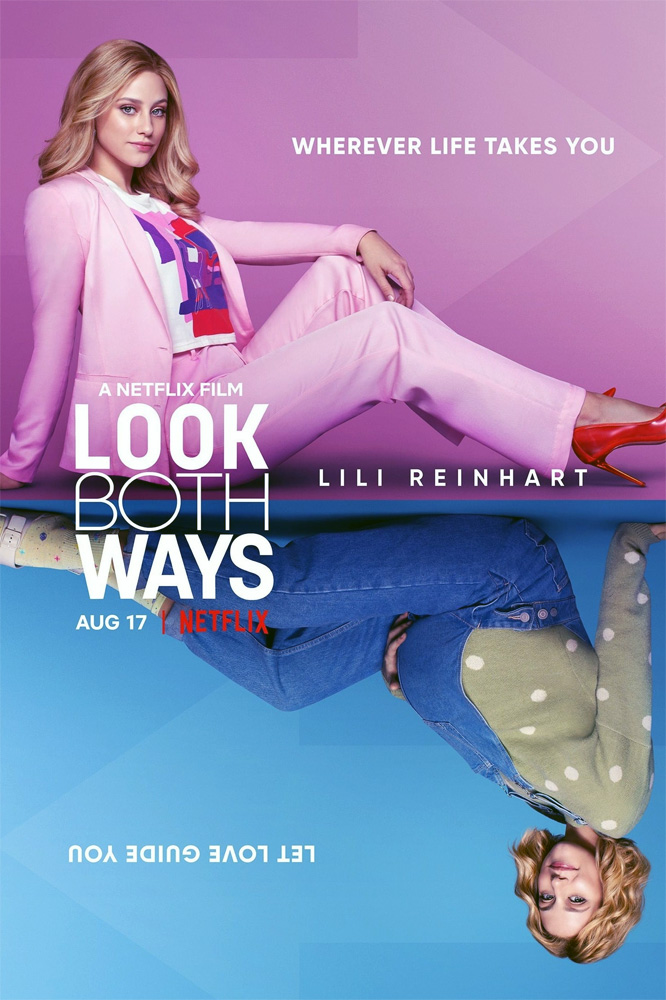