Remake of the eponymous 1974 film about a group of prison inmates who put together a football team to play against the prison guards. The warden "recruits" a former pro quarterback (Adam Sandler) who's serving time to organize and train the team of inmates, in what's supposed to be a fixed game. The inmates though use the game as an opportunity to beat up the guards. Also with Chris Rock, Burt Reynolds, William Fichtner and James Cromwell. Directed by Peter Segal. [1:49]

SEX/NUDITY 5 - We see a video of a man being approached by another man, one puts lipstick on the other, they kiss, they go behind a screen, and we see their silhouettes as they hug and kiss.
► We see a video of a man posing in jockey shorts for an older woman: she is then seen in her undergarments (a girdle, garter belt and stockings), the man swats her on the buttocks with a book, and they run around.
► A woman swims in a bikini and the camera focuses on her barely covered buttocks as she climbs out of the pool, and several women wear short and tight-fitting tops that reveal cleavage and bare abdomens and the camera lingers on one woman's breasts. Several cheerleaders wear short tops and skirts that reveal cleavage, bare abdomens and legs, a woman wears an extremely low cut dress that reveals a lot of cleavage, and many women wear an array of revealing outfits at a party, mostly exposing cleavage, bare shoulders, backs, abdomens and legs.
► We see several men nude in a locker room: most are bare-chested with towels on or below the waist, one man showers (we see his bare chest, abdomen and legs) and two other men make comments about the size of his endowment. A gay man wearing a skirt does a cartwheel, and his skirt flips up revealing his bare buttocks (he wears a jockstrap under his skirt). A man's pants slip down revealing part of his buttock cleavage and we see a man wearing only a jockstrap. Several male cheerleaders wear short tops and shorts that reveal bare abdomens and legs. Men are bare-chested in several scenes (in the prison yard, playing basketball, in locker rooms). A man's rather large abdomen is exposed in several scenes.
► Several gay inmates practice a cheer and they spell out a part of the male anatomy with their bodies. Several gay inmates do cheers wearing skimpy outfits and they wiggle their hips and buttocks toward the crowd.
► An older woman locks herself in an office with a man, she approaches him with two glasses of wine, they drink and she says that he has to "earn" a favor (implying some sort of sexual exchange). An older woman makes suggestive remarks to a man about his posing (including comments about the size of his endowment) in underwear advertisements. An older woman looks at a photograph of a man in jockey shorts and makes a suggestive comment ("Oh, what I could do to you.").
► There are comments made about prison sex in several scenes (one has a character saying that a group of gay men, "don't look so good now but wait 6 months..."). A man makes a remark about there being "less sodomy" in politics than in prison. A man tells another man that, "you had sex with my wife before we got married." A man prays and vows to ."..stop cheating on my wife with black guys." An inmate cheers and says "group hug in the showers tonight."
► A gay man makes suggestive remarks about another man ("I think I'm in love," he asks a woman where her "sexy boy toy" is, etc.). Several male inmates act effeminate, flirt with other male inmates and dress in feminine garb throughout the movie. A man touches his nipples and says they are sore.
► A man tosses a large athletic supporter to a man and makes reference to the size of his genitals. A man scratches his crotch.

VIOLENCE/GORE 6 - A radio explodes engulfing a prison inmate in flames: the cell door is closed, he is trapped, and we see people gathered at his funeral.
► An inmate kicks another inmate in the face, breaking his nose (we see his cut and twisted nose) and another man puts the nose back in place (we hear a crunch). An inmate hits another inmate in the face with a food tray, the other inmates in the cafeteria start fighting, the guards point their guns at them, and one guard throws a grenade that explodes (the projectiles look like ball bearings) and the men fall to the floor (no one appears to be injured).
► A guard punches an inmate in the stomach, then knees him in the stomach and hits him on the back with a nightstick while he is on the floor. Guards with guns ride on a prison bus with a prisoner, and one guard hits the prisoner with the gun in the stomach twice, and another guard kicks the prisoner off the bus (he lands hard on his back on the ground). A guard hits an inmate in the head with a nightstick and it is implied that an extensive beating follows, although we do not see it (we see the man with a bruised face later). A guard punches an inmate in the face, and a guard pushes an inmate into a sofa.
► An inmate is locked in a "hot box" for a week, and we see him sweating and delirious and we see maggots wriggling on a tray of food that's near him. An inmate slams his head against a cement wall several times (we see his bloody forehead).
► A football game between prison guards and inmates includes many players being knocked down by punches, kicks and flips: one is picked up and slammed onto a bench that breaks beneath him, several players are pulled down by grabbing their face masks, and a referee is hit in the crotch by a football twice (he stays on the ground after the second hit and another man gives him a "wet Willie"); also, a man is hit in the face, he flips, he lands hard on the ground and is taken off the field on a stretcher, another man is hit hard, he flips and is taken out on a stretcher too, and another man is hit hard by several players. Many more men are hit hard, and a man is hit hard on the leg breaking his knee (he is seen on crutches later).
► During a one-on-one on a basketball court a man is elbowed in the face several times, shoved into the hoop pole (he has a bloody mouth), punched in the face and swung to the ground by his shirt. Several inmates fight during football practices and they kick, punch and slam each other into the ground. A man is hit hard on the football field and falls to the ground.
► Police chase a man driving a car recklessly through streets causing other cars to swerve and collide, and the man in the car stops suddenly and many police cars slam into him, completely smashing the car; the man gets out of the car with a bloody forehead and nose.
► Three guards with nightsticks surround an inmate and goad him by trying to get him angry enough to attack them. A guard with a rifle takes aim at a man as he walks away but does not fire. A prison warden tells inmates that they will be shot in the head if they dare run away.
► Several men empty a large canister of ice and liquid over a man's head and a man slams a drink canister down onto a table breaking it in half. An inmate slams into a training bag so hard that it breaks the wooden frame holding it. A man locks a woman in a closet and leaves her there, and she pulls on the door and yells at him.
► A man says, "OJ chopped his wife's head off..." A woman threatens to slit a man's throat. Inmates become involved in a football team for the sole purpose of being able to hit and harm guards (one inmate says "We could kill them").
► A man has deep scars on his face and neck. A severely overweight man is shown to have difficulty participating in physical activity. When talking about a man running in bare feet, he refers to his having "slave feet." A man teases a police officer about the size of his ears. A man pulls a hamburger out from the crotch of his pants and gives it to another man. Men slip and slide in mud while practicing.

SUBSTANCE USE - A man drinks beer while driving a car, and a man is shown drinking a lot of beer in one extended scene. People drink alcohol at a party, and two men drink alcohol in another scene. Men smoke cigarettes in several scenes, and one man smokes cigarettes while on the football field and with his helmet on. A man is shown taking steroids. One man takes estrogen pills unbeknownst to him.

MESSAGE - The U.S. prison system can be corrupt and brutal. 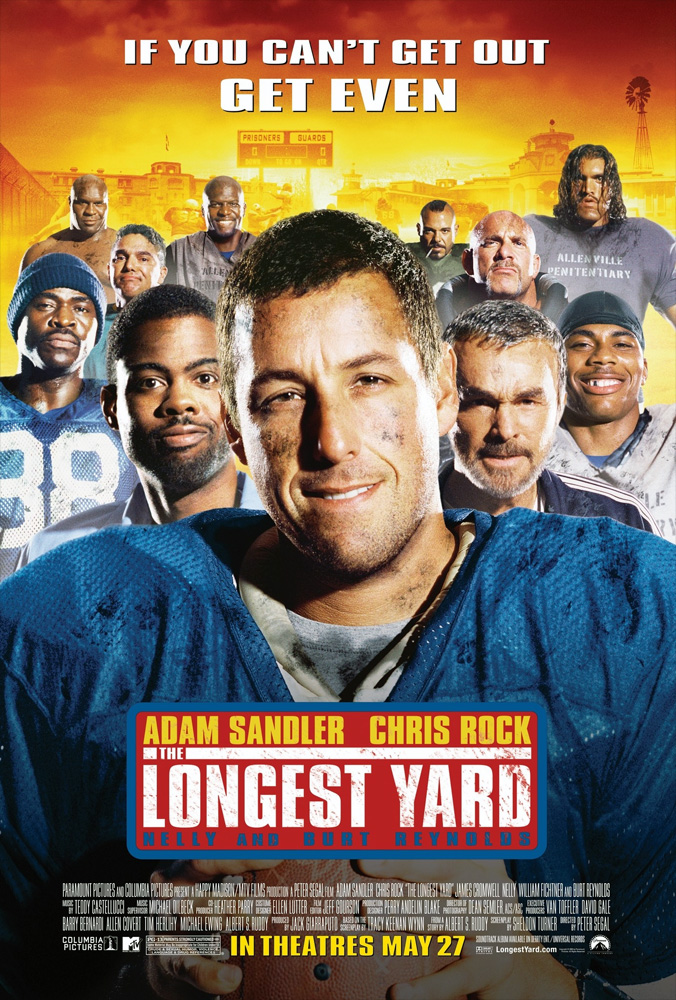