Why is “The Life Ahead” rated PG-13? The MPAA rating has been assigned for “thematic content, drug material involving minors, some sexual material and language.” The Kids-In-Mind.com evaluation includes discussions of the sex trade and some cleavage revealing outfits, several fistfights, an attack on a woman, discussions of the Holocaust, a woman suffering from dementia, a scene of forced child separation by police, a preteen boy selling drugs for a man, and at least 6 F-words and other strong language. Read our parents’ guide below for details on sexual content, violence & strong language. An aging Holocaust survivor (Sophia Loren) living in Italy operates a home for the children of prostitutes. When a preteen Senegalese boy (Ibrahima Gueye) robs her, she agrees to take him into her care. Also with Abril Zamora, Renato Carpentieri, Massimiliano Rossi and Babk Karimi. Directed by Eduordo Ponti. In Italian with English subtitles or dubbing. Several phrases are spoken in Italian, Spanish, Hebrew and Romanian without translation. [Running Time: 1:35]

The Life Ahead SEX/NUDITY 2

– A woman speaks of having been a madam for prostitutes for many years and says that she currently runs a childcare center for the children of a few prostitutes. A preteen boy suggests to a man that he begin a relationship with a woman, but the man says he can never marry a Jewish woman.
► A preteen pulls a sex aid out of a woman’s purse and waves it around and the woman takes it away and says it is for work.
► A transgender woman wears miniskirts and mini-dresses that extend to about mid-thigh and tops that are deeply cut and reveal cleavage. A dozen shirtless boys (their bare chests abdomens and backs are seen) wear knee-shorts while playing soccer in a sandlot.

The Life Ahead VIOLENCE/GORE 3

– A teen boy attacks another preteen boy, punching him hard in the stomach and he falls and pants for several seconds as the older boy runs away. A man pushes a preteen boy and slams him into a sitting position on a concrete seat; the boy gets up, kicks over the man’s motorbike and runs away as the man shouts. Two preteen boys yell and push each other in three scenes until a woman yells at them and separates them each time.
► A preteen boy grabs a tote bag from a woman and she screams; when the boy’s guardian sees what he has stolen he tells him to return the items or the boy must live elsewhere and the man and the boy return the items to the woman who shouts at the boy saying that he knocked her down and she has heart trouble; then she and the man argue about the boy. A loud street scene features several police officers grabbing women and children, separating the adults and children, and taking them away in separate directions, and we hear screaming. A preteen boy shouts at a man in a store office and slams a book to the floor, causing the pages to fall out and scatter.
► A preteen boy threatens to beat up another boy (no fighting occurs). A man threatens to punch a preteen boy in the teeth. A teen boy shouts at a man who shouts back and the teen leaves the building. A preteen boy and a woman argue several times. A woman says that a preteen boy might slit the throats of other children in their home, as well as her own (this does not happen). A preteen boy tells another boy that he is an orphan and that when he was 6-years-old his mother told his father she no longer wanted to be a prostitute, so his father “went off” and beat his mother to death. A preteen boy tells a man that he was expelled from school for stabbing a pencil into the neck of a bully; the man says the Almighty took his wife back (his wife had died a few years ago). A preteen boy sees tattooed numbers along a woman’s forearm and learns that she was a prisoner in a Nazi concentration camp. A woman tells a preteen boy that she only felt safe when she was hiding under the floorboards of the building in which she was kept at Auschwitz. A preteen boy returns a cell phone and a small amount of drugs to a man, quits and leaves, as the man tells him he can never return and sell drugs for him again.
► A transgender woman calls out to a preteen boy, who is startled and runs into an apartment building basement as the woman chases him; the boy locks himself into a small room, sitting down and crying as the camera pans over to a dead woman on a bed. A preteen boy walks into a hospital and sees a woman he lives with; she suffers dementia, not recognizing him and he cries (she lies in a bed with an oxygen clip at her nose). A preteen boy takes a wheelchair to a woman’s hospital room, places her in it and wheels her home to a small room in her basement where she once said she felt safe; she sits in a chair for a while and later lies in a bed where she dies and the camera cuts to a cemetery and a brief funeral around a grave.
► A woman sits in a chair on a roof in a rainstorm, staring into the distance while two preteen boys dance, make faces, and make raspberry sounds at her until she suddenly becomes alert and shouts at them. A woman wanders off from a group and people search for her, finding her sitting on a short wall and staring into the distance; she becomes alert and leaves with them. A doctor says that a woman needs a CAT scan because blood and oxygen may not be making it to her brain (we don’t see any testing or treatment). We hear an ambulance siren off-screen and the camera pans to a gurney holding a woman, as she is loaded into the ambulance.
► A preteen boy has three dreams that we see where a lioness growls, purrs, and licks him in the face as he laughs loudly in his sleep, waking a woman and two other children; and in another dream, the boy pets the animal. A woman takes a preteen boy to the doctor after he has dreams about a lion, and the doctor has no answer for the dream activity. A preteen boy sees a lioness lie down in a path in a cemetery and the boy smiles and leaves. A woman finds her 11-year-old son after they had been separated, hugs him and cries, and takes him away.
► A man dumps pieces of raw fish onto a table, cuts them and forces a preteen boy to eat one; the boy chews and grimaces.


The Life Ahead LANGUAGE 5

The Life Ahead SUBSTANCE USE

– A man gives a preteen boy a baggie containing a gray brick of what he calls “hash” and “weed” and tells him to sell it and we see the boy accept money from five different men in secluded corners of the city and we see two small bags of the drug passed between them, a boy accepts money from and passes a small plastic bag of drugs to a man as well as a teenage boy and a boy about 11-years-old, and a preteen boy accuses another boy of being on drugs or high because he dreams of a lioness (he is not using drugs). Men and women drink shots of clear liquor as a man and a preteen boy drink short glasses of whiskey, a man pours short glasses of clear liquor for himself and a preteen boy (the boy does not drink it), and the man pours himself another glass and drinks it. A woman smokes a vape cigarette outdoors and blows huge clouds of smoke, and a man smokes a cigarette at an outdoor café as a woman holds a small glass of clear liquor.

The Life Ahead DISCUSSION TOPICS

The Life Ahead MESSAGE

– Many people of different ages and backgrounds have difficult lives and can sometimes help one another. 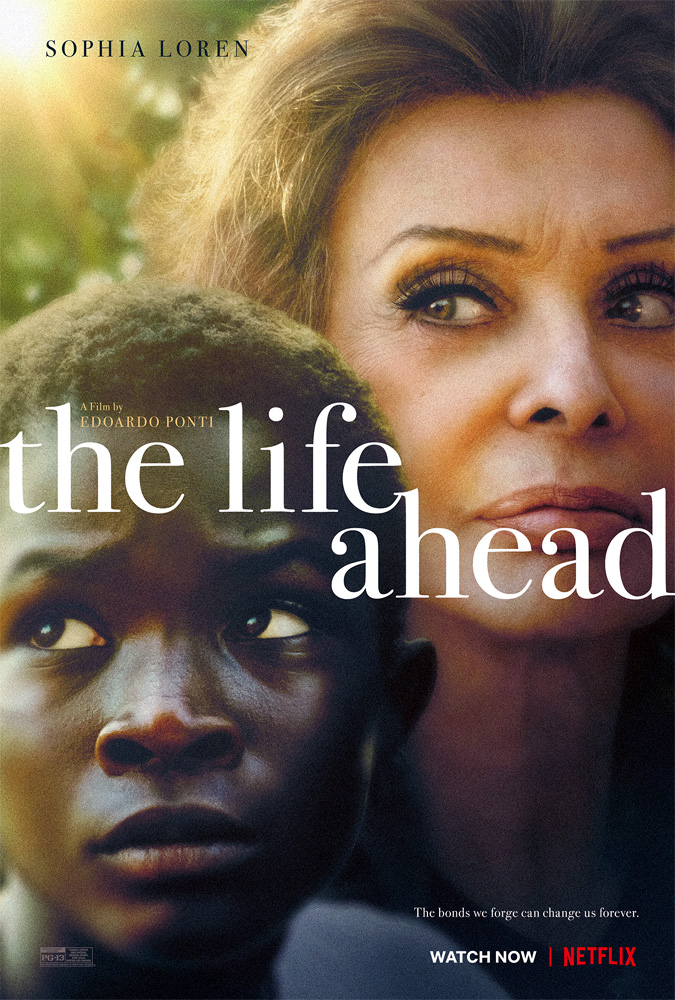