Robin Williams stars as a priest who makes it his mission to make sure young couples are prepared for marriage, and so requires any couple married in his church to pass his matrimony class before the ceremony. But this program becomes quite a strain for one young couple (Mandy Moore and John Krasinski) and they begin to question whether they are indeed right for each other. Also with Christine Taylor and Roxanne Hart. Directed by Ken Kwapis. [1:40]

SEX/NUDITY 5 - A woman pushes a man back onto a bed after pulling his belt off his pants, they kiss, and it is implied that they have sex. A man and a woman kiss passionately, they go into her apartment and close the door, and it is implied that they have sex. A man and a woman kiss, the man pulls the woman onto a bed, they continue to kiss, she asks, "What are you doing?" and they are interrupted by the doorbell.
► A man accidentally grabs a woman's clothed breast when trying to stop her from stepping into a street in front of a speeding car, the woman asks if he is "Skipping to second base," and she asks if they should go back to first base and then they kiss.
► A priest and a woman talk about having sex in out of the ordinary places and the woman's fiancé becomes uncomfortable with the way they are talking to each other. A man and a woman lie in bed together, he asks her in several euphemistic terms if she wants to have sex and she declines. A priest asks a man, "What do you do besides Sadie?" A woman asks a man how she looks and he says, "Like you've just..." but she interrupts him before he makes a comment about them just having had sex. A man suggests that people should not be too serious about sex and to allow it to be spontaneous. A man talks about his fiancé being "really hot." A man and a boy eavesdrop on a man and a woman talking about having sex. A man makes a remark about a woman having a bi-sexual roommate in college. A woman, frustrated with her children and her husband, says, "I'm getting my tubes tied." A man tells his friend that he should find other women to have sex with and forget about the woman he loves. A man says that a deflated basketball "Needs Viagra."
► A woman wears an off-the-shoulder dress that reveals bare shoulders and cleavage, and a woman wears low-cut dresses and tops in several scenes that reveal cleavage. A man is shown showering (we see his bare chest and shoulders). A man belly dances with his shirt tied up in such a way that his bare abdomen is exposed, he wiggles his hips and shouts, "Thrust, thrust!" while a woman wearing belly dancing garb (her bare abdomen to the hip and cleavage are visible) instructs him, as well as several other men. We see a man in boxers and a T-shirt in a few scenes.
► A man and a woman kiss and hug several times. Men and women dance together in a party scene.


VIOLENCE/GORE 3 - A man punches a man in the face and he falls to the floor (there's no blood).
► A man and a woman argue over a stick, she pushes hard, he is thrown into a table, and he falls on the floor along with food from the table.
► A man shakes an animatronic baby and pounds its head on a display case repeatedly until it pops off.
► A man throws a baseball very hard, another man catches the ball several times and grimaces, but then one throw strikes the man in the nose, and he falls back onto the floor and we see his nose bleeding.
► A man and a woman are given a guided tour of a labor and delivery room wing in a hospital: women are shown in various stages of labor (we hear screaming and moaning), there is talk of pain relief and a woman cries from pain as en epidural is inserted in her back.
► A blindfolded woman drives a car through city streets, she nearly strikes pedestrians, she swerves through oncoming traffic on a one-way street, and she nearly runs into a man on a scooter who crashes into a parked car and flips into the back seat (we do not see if the man is injured but it is played for laughs).
► A woman pinches another woman's arm and stomps on her foot. A man leans on a line control strap that is released and strikes several people standing in a line in the face (they flinch and hold their cheeks).
► A man climbs into the house through a window and a large dog snarls and barks and knocks him on his back; the dog then spits on the man and licks his face.
► A wife yells at her husband in a few scenes. A husband and a wife argue bitterly. A husband talks about marriage and his wife in disparaging terms, in several scenes. A man makes insulting remarks about his family-in-law. A man talks about not setting precedents for women and giving them an upper hand in relationships that would make it possible for them to assume more powerful roles in business, etc. A man compares the pain of labor to what it would feel like to pull your scrotum over your head. A man instructs a couple to fight over a hypothetical scenario.
► A man blows a trumpet loudly into a microphone, and the sound blares into the ears of a man and a boy who are eavesdropping.
► A priest performs a "healing" on a man and pushes and shakes the man's head several times with no apparent improvement in his condition. Several men carry their wives over an imaginary threshold and a few complain of back pain.
► A wedding band is engraved with "Never to fart." A man and a woman are given two animatronic babies to care for, one cries, the man picks it up and it blows mucus out of its nose; also, one vomits repeatedly (in an end credit reel) and one defecates (we hear flatulent sounds and a man reacts to the odor). A man hangs an animatronic baby in a carrier from a hook in a bathroom. An animatronic baby defecates blue goo, and then "urinates" in a man's face.

SUBSTANCE USE - People are shown drinking alcohol, people drink champagne at a party, people drink alcohol in a few bar scenes, two men drink beer, and two animatronic babies are shown drinking alcoholic beverages and one falls over onto the bar suggesting that it is "drunk." We see a woman in labor being injected for an epidural. A flight attendant says a flight is a no-smoking flight but that "you can light up whatever you want when we land in Jamaica."

MESSAGE - Marriage is difficult and requires work and participation from both parties. 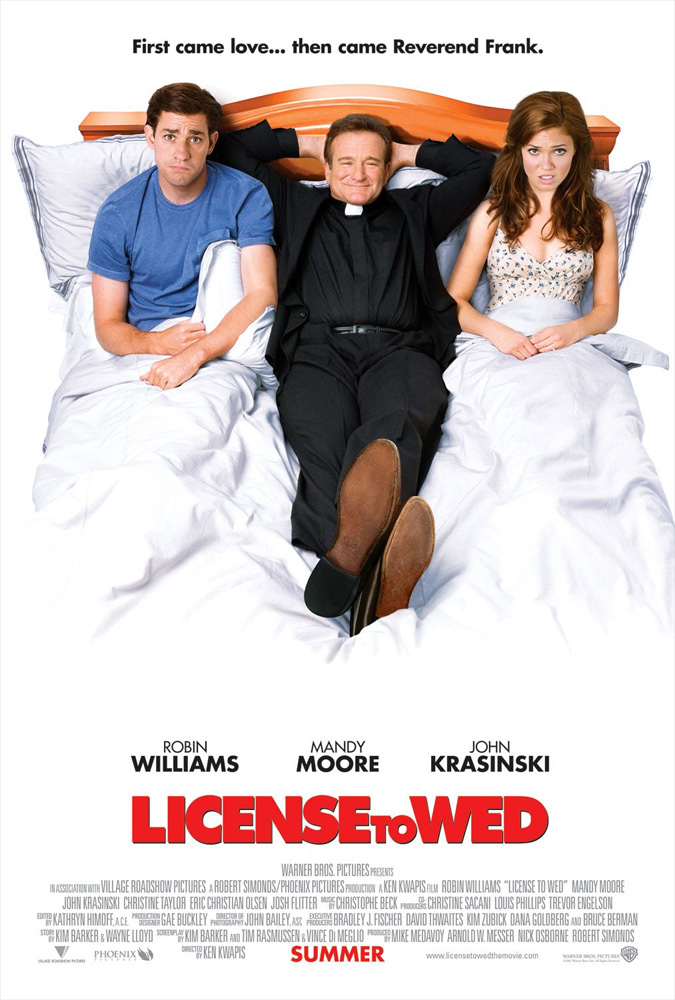