A discredited scientist (Will Ferrell) and his companions (Anna Freil and Danny McBride) discover another world through a time warp, and battle aliens, dinosaurs and the environment in a bid to return home and redeem the scientist's reputation. Also with Jorma Taccone. Directed by Brad Silberling. [1:33]

SEX/NUDITY 5 - Two men use a vibrating alien artifact for sexual stimulation (they embrace the tall pyramid-shaped crystal, wrapping their arms and a leg around it) and one of the men suggests that a woman should use it for the same reason.
► Two lizard creatures (the seem male but their gender is not apparent) make suggestive overtures to each other and begin to make out off screen; they remove their skins (off-screen, though the skins are seen) to do so.
► Two men (in their underwear and shirts) and a primate sleep in a sexually suggestive configuration. A primate makes suggestive dance moves. A woman tears her pants to convert them into shorts and a primate fondles her legs and imitates the Burt Reynolds "Cosmo" pin-up pose. A primate feels a woman's clothed chest, twice and later touches her chest again, and fondles a man's crotch. A T-Rex licks a man's face. A primate sleeps with his hand on woman's chest.
► A man and primate are urged to French kiss each other, they begin to do so, but we don't see the actual kiss. A woman kisses a man, who then reciprocates and they kiss repeatedly. A man and a woman embrace. Two men hug briefly, in friendship.
► A man meets a group of several women who are wearing only loincloth-style clothing; their long hair covers their chests, but a partial bare breast or two can be seen briefly. Men are shown bare-chested in a swimming pool, and one of the men is shown walking around in skimpy wet underwear. A man takes his shirt off to go to sleep, revealing a fantastically huge mosquito bite on his back.
► A souvenir mug shaped like a woman's bare breasts is taken from a display of similar mugs. A man rolls up his pant legs, rolls down his socks, and rolls up his shirt, exposing his belly and creating an effeminate effect. A man touches a woman's clothed chest.
► A character says, "The love I feel for you is a billion times the love Jesus felt for mankind on the cross."


VIOLENCE/GORE 5 - Dinosaurs surround an ice cream truck, they threaten the ice cream man with their teeth and we briefly see that they have torn his arm off (it is implied that he has been killed). A man is swallowed whole by T-Rex (but is later shown to have survived). A dinosaur picks a man up by the scruff of neck and drops him.
► An oversized mosquito-like insect sucks an alarming quantity of blood out of a man's neck, and moments later it sucks even more blood from the man's back, forming a huge blood sack and causing the man to become tired and pale; the man falls back, smashing the insect and causing blood to splatter everywhere.
► A dinosaur bites lizard men and sweeps others away with its tail. A dinosaur freezes solid from inside out, then shatters and explodes, with dinosaur chunks showering down over several people. A lizard man falls into a lava pit and disintegrates. A holographic projection shows a lizard man being shot and killed by an energy beam weapon and a skeleton of a lizard man is found.
► A woman swings a makeshift whip threateningly and knocks down several lizard men; other lizard men grab her, other men knock down several lizard men, and they use a primate as a battering ram to knock down more lizard men.
► An expedition group falls through a door and lands on a pile of bones, slimy tentacles grab the group them and hoist them high into the air, and a dinosaur bites through the tentacles, causing the group to fall to the ground. A T-rex threatens a group with razor-sharp teeth. A gigantic crab-like creature scrambles toward several men threateningly, then falls into a hot spring and is cooked alive (the men are then shown eating the dismembered creature). An angry T-Rex comes after three people. A man faces off against a dinosaur, ready to do battle. A dinosaur bares its teeth.
► A primate threatens to kill another one with a knife. There are several close calls with ferocious dinosaurs, which are chasing three people. There is a harrowing, scary, raft ride, through the water and down a space/time warp. A woman is abducted by lizard men and imprisoned in a cage above a volcanic pit.
► A man throws rocks at his companion. A man and a lizard man wrestle and punch each other; another man jumps (pro-wrestling style) into the fray and makes a hard landing on the rocky ground. A lizard man trips a man. A man places a wrestling hold on a lizard man. A primate hits a lizard man on the head. A TV personality lunges at a man and grabs his throat. A lizard man hits another man in face. A man lunges for a newscaster and is sprayed with a fire extinguisher. A man burns himself with a cigarette lighter.
► We see a glimpse of a human skeleton. We see skeletons dressed in uniforms and seated at a table. A human skull is seen lying in the sand. An empty space suit is seen, suggesting that the astronaut has died.
► A tour guide carries a rifle. Three people pick up objects to use as club-like weapons. A man lights a firecracker, which explodes with a very tiny pop. A man throws a rock at a woman, hitting her lightly in the shoulder, and calls her ugly. A primate shoves a man in surprise.
► A man wears a skull tattoo on his arm. A man takes his shirt off to go to sleep, revealing a fantastically huge mosquito bite on his back. Fruit contains large spider-like insects, which crawl all over man; a primate eats the insects. A man discusses having collected a jug full of dinosaur urine; he pours the urine over his head and drinks it out of the jug, but then spits it out and the urine burns his eyes and nostrils. We see a huge mound of dinosaur excrement; one party member takes a dinosaur egg from the mound. A dinosaur spits, covering a group with saliva.
► A man discusses cooking and eating a primate, which is a companion of his.

SUBSTANCE USE - Two men and a primate drink a narcotic and get high, and a character says, "I'll bet someone's growing weed in here." A man holds a beer. A man starts to light a pipe, but is stopped and a man holds an unlit pipe.

MESSAGE - Discover what you want out of life and learn to recognize it when you find it. 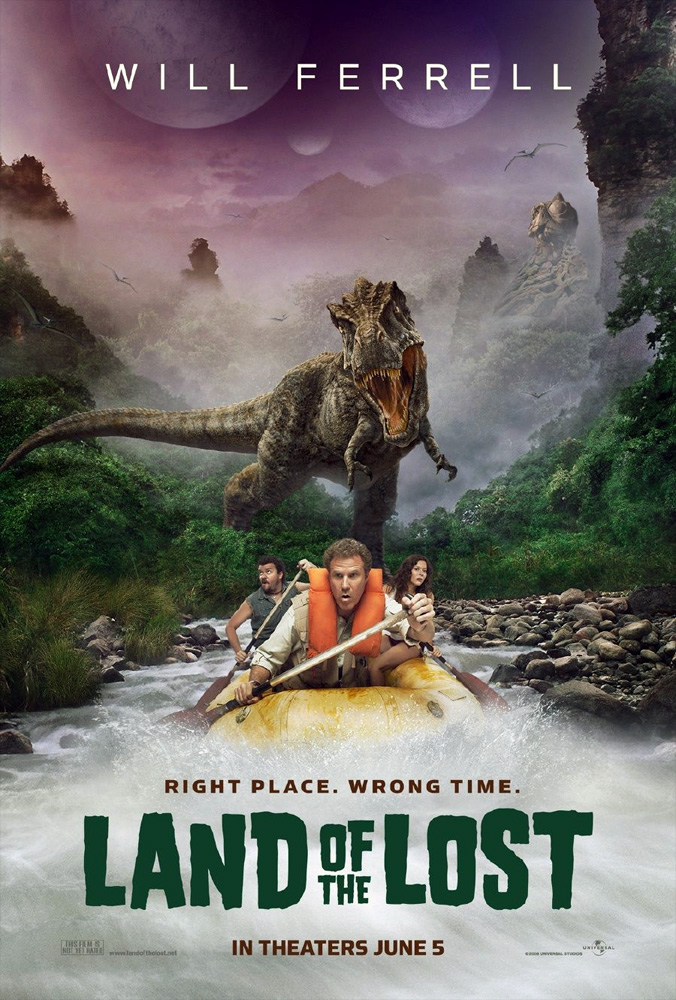