A documentary of the life of 27-year-old singer Katy Perry and her California Dreams world tour in 2011. We watch as Katy leaves her conservative Christian family and Gospel music, to become a leading American pop star after some mis-starts. Also with Angela Hudson, David Hudson, Shannon Woodward, Rachael Markarian, Mia Moretti and Glen Ballard. Directed by Dan Cutforth & Jane Lipsitz. [1:57]

SEX/NUDITY 4 - Two scenes flash quickly of a female singer in a short lace dress without underwear and the same dress in beige; we see bare breasts except nipples and the crotch area is covered.
► A man and a woman kiss several times in different scenes.
► Katy Perry wears dozens of outfits that include short, tight micro-miniskirts that reveal nearly full bare legs. Many stage outfits include bare-midriff tops that are scoop-necked and reveal some cleavage, along with bare arms and shoulders. Some dresses are short (to mid-thigh) with scoop necked bodies that reveal some cleavage and feature whirling disks over each breast; instead of disks on one such dress, a short rifle barrel is attached to each breast area and these shoot out whipped cream or thick soapsuds. Another outfit is a white one-piece swimsuit that reveals partial buttocks, full legs, is backless and shows bare shoulders and arms. Two outfits are like one-piece swimsuits revealing moderate cleavage. One outfit is a silver cone bra with padded cones and tassels, paired with skin-tight briefs and a faux shirt flap in front.
► Female backup dancers wear short skirts, and miniskirts with matching colored briefs underneath and the skirts often fly up to reveal the briefs. Some dancers wear colored briefs only, with midriff tops that expose cleavage. Female teen fans at rock concerts wear very short shirts and short-shorts that reveal full legs. Some teen fans wear blouses or short dresses that copy a star's whirling disks on the breasts and reveal cleavage. Two scenes in a dressing room feature a seated woman in a large wraparound towel that reveals cleavage, bare shoulders, arms and thighs. Several men appear wearing tank tops that reveal bare shoulders, arms and tattoos. Some women on a stage crew wear opaque tank tops, but colored bra straps show on their bare shoulders.
► The star's mother shakes her head and looks horrified at the song, "I Kissed a Girl" (the repeating lyric is, "I kissed a girl; I liked it"). A female singer dresses in a one piece bathing suit outfit with a short peacock tail sings repeatedly, "Are you brave enough to show me your peacock?" while backup singers repeat, "Peacock" 20 times and we see adults in the audience laughing. A female trainer stretches a singer's thigh muscles and staffers watch and laugh, saying the action looks inappropriate (like being in stirrups in an OB-GYN office).
► We are told that Katy wears flesh colored tights underneath all of her outfits that prevent her from jiggling. The star's mother tells her she will not watch her on TV if she has half her clothes off. We hear that a Christian female singer was divorced from an older non-Christian actor and we see and hear her crying and we hear her say later that the relationship was a fairy tale that was not true. In an interview, a pop star says she does not want to be a mother right now. A female interviewer tells a pop star, "I love your husband," the star replies, "He's mine" and the interviewer, who is lesbian, smiles and says, "That's OK."
► Four men show up to a concert, dressed as Katy Perry.


VIOLENCE/GORE 2 - A woman becomes angry in a recording studio and throws microphones, music pages and a stool on wheels, but no physical or property damage occurs.
► A woman argues with agents and promoters. A few arguments occur between staff members and a singer that wants to make extra trips while on her world tour in order to see her husband; staffers complain of fatigue. A grandmother and her pop star granddaughter argue briefly about the girl always being a showoff.
► A woman lies in a reclining makeup chair, exhausted and stumbles on the way to the stage. A woman lies in a makeup chair, crying with fatigue and sadness.
► Several loud concert scenes feature screaming female and male fans; an older audience member sits in a wheelchair and shouts that the shows are too loud. At an amusement park, three women scream as they are laced into body harnesses and dropped from a significant height in a prone position during a bungee-drop ride. A singer fires a soapsuds cannon into the first rows of a concert audience, covering the faces and chests of children, men and women with foam (no one is injured), then glitter falls from the ceiling and sticks to the foam.
► Two different women portray an awkward teenager with huge braces on her teeth, a halo dental apparatus, blotchy skin and broken glasses.
► At a Japanese restaurant, a woman eats a large live crayfish in close-up.
► During leg stretching with her trainer, a singer makes flatulent noises with her mouth.

MESSAGE - It's OK to be different. 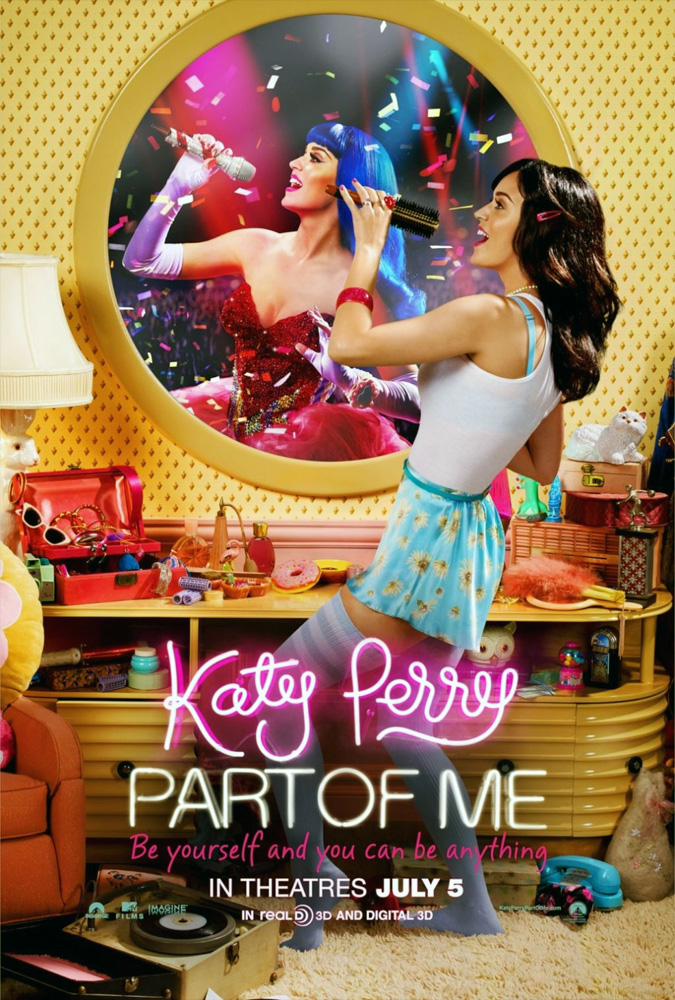