A teenager (Max Thieriot) struggling with an oppressive father and school bullies discovers that he has the power to teleport in an instant from one place to any other, regardless of distance. As a young man (Hayden Christensen) he also discovers that there's a secret society that's dedicated to hunting down and killing "jumpers." Also with Samuel L. Jackson, Jamie Bell, Diane Lane, Rachel Bilson, AnnaSophia Robb, Nathalie Cox (II), Barbara Garrick, Meredith Henderson, Tom Hulce and Michael Rooker Directed by Doug Liman. [1:28]

VIOLENCE/GORE 6 - We see a man strung up by cables that send electric currents through him; he moans and twitches, another man with a knife approaches him, and kills him by stabbing him in the stomach and pulling the knife up to his chest (we hear crunching and squishing).
► A man with a taser-type weapon and a young man fight: the young man is zapped several times, he moans and crashes to the floor and into walls, he's thrown over a balcony, and he crashes onto a glass top table (he moans and crawls away and has a bit of blood on his face).
► Two men with taser-type weapons attack two young men: one young man is lashed to a stone with an electrically charged cable, the other transports from place to place while being fired at, one man is thrown to the ground and strikes his head on a rock (we see him lying motionless with a bit of blood on his face) and another man crashes into a door.
► A young man punches another young man in the face, they fight, and one pushes the other through a door and onto the ground outside.
► A young man finds a man who seems dead, we see the man lying motionless on the floor and the young man grieves.
► A teenage boy walks onto a frozen river to retrieve something, the ice breaks, he falls through and is pulled under the ice by the current; people on the shore panic thinking that he has died. A young man and a young woman end up under water and she struggles to get free from cables that hold her to a wall (they are both OK).
► A young man is lashed to a wall with electrically charged cables, a man with a knife threatens him, and another young man shoots a flamethrower toward him and the man pulls away.
► Two young men fight on the top of a pyramid: then teleport to a bridge and fight while dodging traffic, they fight in mid-air and crash into a swimming pool, then onto a glacier and then into a truck, which ends up in a battle in Chechnya (we see tanks rolling through rubble and armed men firing guns); a tank rolls over the truck while a man seems to be still inside.
► A young man slams another young man against a wall, holds him around the throat and then throws him to the floor. A man punches another man in the face and he falls to the ground. A young woman slaps an unconscious young man in the face and he wakes up.
► A young woman is lassoed and pulled back through a teleportation tunnel (we see her unconscious and lashed to a wall).
► A young man is trapped in an electric tower that has collapsed; he is being shocked but seems otherwise fine.
► A double-decker bus careens toward a man, tumbles over and nearly crushes him.
► We see a man in flames jump out of an apartment and land on the ground (we don't see the aftermath).
► A young man drives a car through the window of a car dealership and toward another young man on the sidewalk outside and then drives recklessly through streets, nearly hitting pedestrians and other cars.
► During several teleporting scenes a teenage boy slams into hard ground when arriving at his destination; he does not appear to be injured. A teenage boy slams into a tree, falls to the ground and a tree limb falls to the ground next to him.
► A young man talks about hunting and killing people who are trying to kill him. We see news reports of severe flooding and talk of people dying. We hear that a battle has been waged for a long time between "jumpers" who can teleport and a group of religious people. A young man is told that there were two choices, either to be killed or leave. A teenage boy talks about his mother having left him when he was 5.
► A father breaks his son's bedroom door open. A young man and a young woman are arrested for trespassing.
► A teenage boy teases a teenage girl, takes something away from her and throws it into a river.
► A young man urinates against the wall of the Coliseum.

MESSAGE - People with unusual abilities can inspire fear in other people, who may try to destroy them. 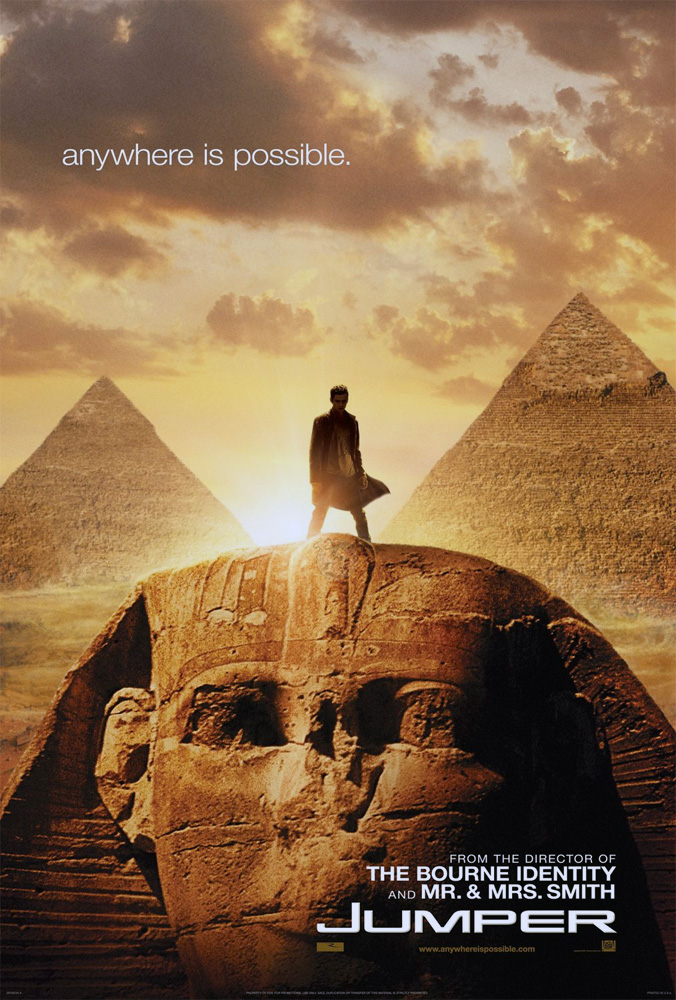