This road picture is centered on the two recurring characters writer/director Kevin Smith created for his debut film "Clerks" and subsequently used as comic foils in his other films: When Jay (Jason Mewes) and Silent Bob (Kevin Smith) learn that a movie is being made featuring their characters, they expect royalty checks to start rolling in. When they don't, the disparate duo decides to sabotage the film and thus make their way from New Jersey to Hollywood. They have several adventures along the way and end up in the Miramax lot, invading the sets of several movies, some real, some imaginary. Also with Shannen Doherty, Renée Humphrey, Ben Affleck, James Van Der Beek, Jason Biggs, Matt Damon, Joey Lauren Adams, Shannon Elizabeth, Eliza Dushku and Carrie Fisher. [1:40]

SEX/NUDITY 7 - A man and woman kiss sensually repeatedly (in a daydream a few times, and in reality a couple of times) and he caresses her buttocks. A man and woman kiss for luck, a man kisses a woman a couple of other times and a man kisses a woman's hand. A man drops his pants and exposes his bare buttocks and we see a naked man from the back. Four women dressed in tight-fitting rubber suits (which expose cleavage) gyrate sensually and caress themselves. We see four women in their underwear and one flirts with and propositions a man. A man touches a woman's thigh. There are many sexual gestures: A man thrusts his hips at a window, a man makes a sexual gesture with his hands and tongue, a woman makes a sexual gesture to another woman, a man rubs his behind and thrusts his hips toward a woman, a man waggles his behind at an audience of people and a woman throws a kiss to another woman. We see the screen of a website called "Poop Shoot" and see the image of bare buttocks several times. There are references to oral sex and we see two men putting their heads in the laps of a few men and women in different scenes, we see a man get on his knees in order to perform oral sex on another man (they are interrupted); also a man falls with his face in another man's lap. There is a conversation about having sex with an animal. A group of women in bras dance suggestively, a woman rubs her breasts and puts her finger in her mouth suggestively and a group of women in hip-huggers and tight tops writhe suggestively (in a daydream). There are references to a gay marriage. An orangutan and a man kiss.

VIOLENCE/GORE 5 - We see a man lying in a bathtub filled with ice and he has a huge bloody scar down his back (this is a nightmare). A policeman fires his gun on the set of a children's show and we see the stuffed mascot with a hole in its tummy. We see a man strapped to a table with his brain exposed and a monkey eats from it, and a group of humans are chased by apes on horseback (this is a daymare). On the set of a movie, a man is shot in the chest and flies against a wall with blood on his shirt; two men fight with light sabers and one has his costume hand cut off; and a man breaks down a wall, threatens a man and then punches him in the groin. A van explodes and a man thinks his girlfriend was killed in the explosion. There is a gun battle between a policeman and three women that goes on and on. An orangutan shoots a policeman with a tranquilizer dart. Two women fight with punches and kicks, a woman is nearly stabbed with a knife, a woman is kicked in the face and flies through the air landing on two other women, an orangutan beats two men until they are unconscious (we hear this in the background and see their bloody faces afterward). Police shoot at two men and an orangutan several times. A woman threatens to remove a man's kidneys, and a woman threatens a man with a knife. A man gets tossed out of a moving car, two men fall off a dam and dangle from an orangutan, a man jumps over a dam into the water below, a man is punched and knocked out. We see two men beating up (with kicks and punches) a couple of young boys and a few men. Two men fly up the side of a building by a rope and crash through a window, two men on a bike crash through a window, and two men running from the police crash into a scenery placard. Two men are threatened by a group of police with guns drawn, three women threaten a group with guns, and a policeman shoots his gun in the air. A man is hit in the head with a vase and knocked out. A man knocks the coffee cup out of a man's hand a few times. A woman smacks another woman on the back of the head and talks to her in a threatening manner, and a man grabs a man by the collar and yells in his face. A man passes gas several times, a woman passes gas, an animal passes gas, there are reference to jokes about flatulence and an orangutan blows raspberries a few times. There is a description of experimentation done on animals for medical purposes. We see a man with a bruised eye.

LANGUAGE 10 - About 228 F-words (one is spelled out) and a few profane hand gestures, about 69 scatological terms, 73 anatomical references, 34 sexual references, 43 mild obscenities, 3 religious profanities, 16 religious exclamations, many derogatory references to homosexuals, African Americans and Caucasians, and other insults.

SUBSTANCE USE - There are references to and scenes of people getting high throughout the film. 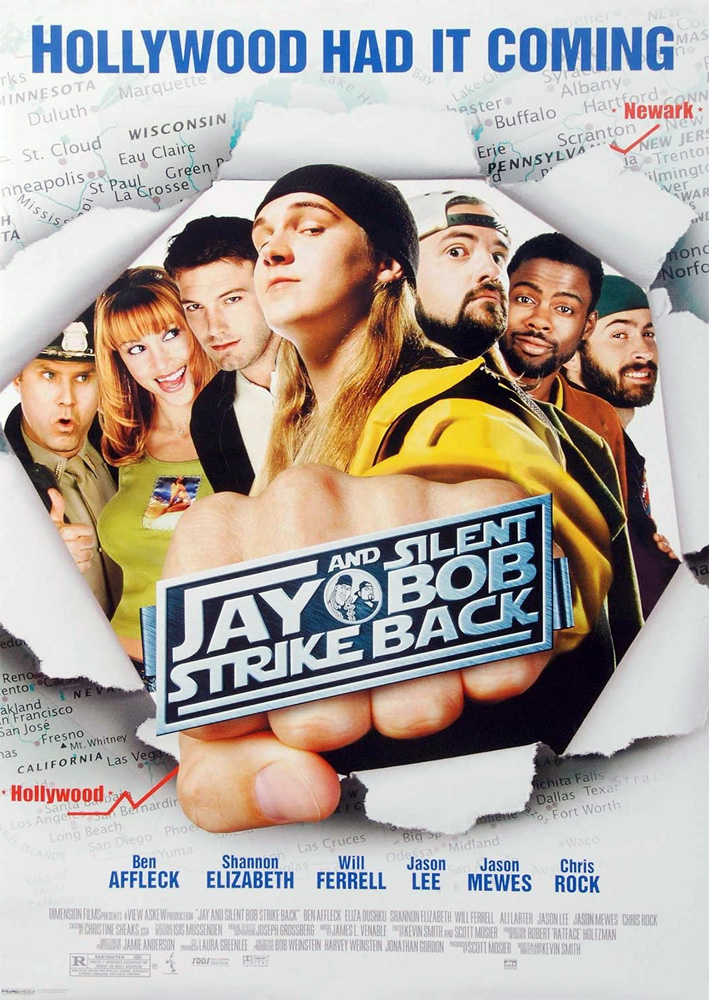