SEX/NUDITY 0 - A chaste peck on the cheek.

VIOLENCE/GORE 5 - Sometimes the violence is played for laughs, but sometimes it is fairly intense and could be quite frightening to children. A shark machine sucks fish into its body, then spits out fish heads on platters; it also harpoons the peach (the harpoon nearly hits a few insects), nearly eats one of the insects that falls overboard, and eventually sucks its harpoon back into its mouth and explodes. During an underwater sequence, we see skeletons in sunken pirate ships, skeletons threatening some insects with knives, an insect being stretched in a stretching machine and nearly cut in half with a knife and some kicking and shoving. A hungry insect about to eat a seagull is hit in the back of the head with another insect's purse (the bird also bites the insect's nose afterwards). Two women are lassoed, lifted into the air by a crane and completely bound up in string. Women chase after a boy with axes and hit the car that he climbs onto, a woman smashes a butterfly with a swatter and tries to smash a spider that's crawling on a woman's face (she misses the spider but smacks the woman's face), a boy dreams he is a bug and is being chased by two women spraying pesticides at him, a woman grabs a boy by the back of his shirt, a boy and woman tumble down a staircase together but aren't injured and a boy trips and falls. We learn a rhinoceros killed a boy's parents and see an image of a rhino with glowing eyes running toward a boy a couple of times. Two insects scuffle, an insect kicks another in the face, an insect slaps another in the face and an insect uses her purse to hit two snapping fish flying toward her. A worm is used as bait to lure seagulls toward the peach. The giant peach rolls down a hill, knocking its occupants around, crushing a car (its occupants survive), knocking down a fence and hitting a bird (we see its feathers fly in the air). Two women yell at, taunt, verbally abuse and threaten a young boy in several scenes; we see and feel his sadness. Two women have seaweed on their clothing and very smeared makeup, which makes them look somewhat frightening; also, throughout the movie we see several huge insects (spider, caterpillar, worm, etc.) that could be frightening. A boy appears to have three small scratches on his cheek throughout the movie. A woman burps. A boy's dinner is some fish heads on a platter.

LANGUAGE 2 - An anatomical reference and lots of name calling.

MESSAGE - Dreams can come true; everyone is special. 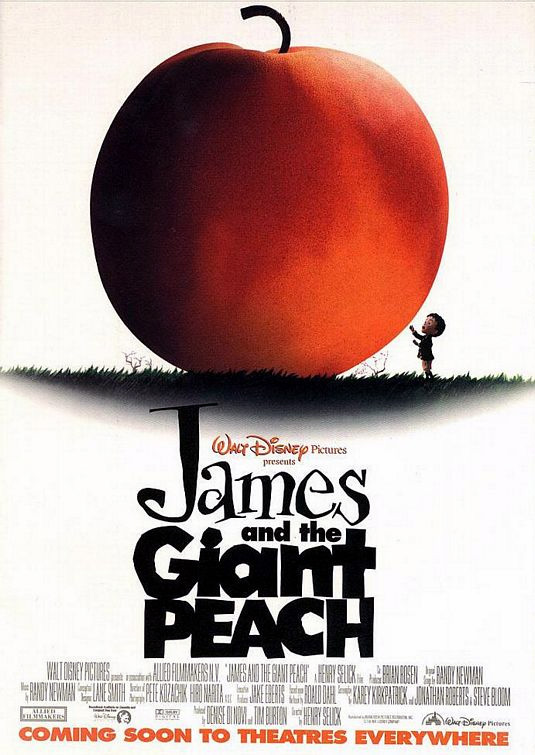