Why is “I Still Believe” rated PG? The MPAA rating has been assigned for “thematic material.” The Kids-In-Mind.com evaluation includes a few kissing scenes, conversations about relationships and dating, some cleavage revealing outfits, several scenes of hospitals and medical treatments, and testing for cancer along with discussions of death and dying. Read our parents’ guide below for details on sexual content, violence & strong language.” Based on the life of Christian music singer-songwriter Jeremy Camp (KJ Apa) and his first wife (Britt Robertson): the story follows the couple while on their honeymoon, when she is diagnosed with un-treatable ovarian cancer. It also features the singer’s college years, his rise as a music star, and how he met his second wife (Abigail Cowen). Also with Gary Sinise, Shania Twain, Melissa Roxburgh and Nathan Parsons. Directed by Jon Erwin. [Running Time: 1:55]

– A man and a woman kiss for a few seconds in four scenes and embrace in two of the scenes; a flashback shows a couple of seconds of each of these scenes. A man and a woman sit close to each other on a beach. A man and a woman date a few times and almost kiss, but do not.
► A young man asks a young woman if she is in a relationship and she says it’s complicated because she does not return the other person’s feelings. A man says that he fell in love with a woman the first time he saw her at a concert as she was singing and praying. A college instructor asks a daydreaming student in class if he has a little girlfriend (no answer) and the class snickers. A young man’s younger brother teases him, singing, “He’s got a girlfriend,” repeatedly. A young man sings, “I love you” to a young woman six times and then says that he loves her; she looks surprised.
► A woman wears short shorts, revealing bare legs to the tops of the thighs. A woman wears short shorts over pantyhose. A woman wears low-cut tops in a couple of scenes that reveal cleavage. A woman wears a low-cut bridal gown that reveals cleavage. A woman wears a slip with a V-neck and thin straps in a dimly lit bedroom while under covers, baring one shoulder and cleavage. A woman wears a long backless dress that reveals her bare upper back and shoulders in a couple of scenes. A man wears shorts that bare his lower thighs, knees, and lower legs.

– A woman enters a hotel room and holds her stomach, groaning in pain and later vomits a substantial amount of blood (we see the goo) into the toilet as she retches loudly and cries; the scene cuts to her being carried by her husband through a hospital corridor as he shouts for help and we see the woman in a hospital bed with an oxygen clip in her nose, an IV line running to one arm and a blood pressure cuff on the other arm, with a medical clip on her forefinger.
► A woman in a hospital bed wakes with a start, gasps loudly, and tells her husband that the pain is all gone; the man runs for the and the husband and medical staff enter the room to find the patient dead and the husband lies on the floor, cries, and sleeps until his father and a friend arrive to take him out of the room; he stops to sign a death certificate before leaving.
► A man runs in the rain and has a flashback to his wife sitting up in a hospital bed and dying. A man receives a late night phone call to come across the country to help his ex-girlfriend who is very ill; the man drives a long distance and rushes into the hospital to see the woman under covers in a hospital bed without any monitors or equipment attached and she says that she has a stage 3C tumor in her stomach the size of an orange, that it has spread to her liver and that, “Maybe God has something bigger for me.” A doctor tells a man that his wife has un-treatable cancer. A man accompanies a woman through a hospital hallway beside her gurney and we see an IV line running to her arm as she is taken to the operating room; the scene cuts to the woman awakening in her hospital bed and the man telling her that surgery was not required because the tumor disappeared.
► A woman sits in a chemotherapy chair beside a machine (we do not see an infusion line); later her hair begins to fall out and days later she shaves her head as we see strands of hair covering the floor at her feet, a man later wheels her in a wheelchair through a hallway and we see her IV stand with a tube running down to a taped spot on her arm. A woman on the sliding platform for an MRI machine slides into the machine; the scene cuts to a doctor’s office and two X-rays of a pelvis and spine as the doctor tells a woman and a man that the woman needs surgery right away, even though it means she will be unable to have children afterward. A young boy has several developmental disabilities, including a twisted spine, a grimacing face, and poor eyesight requiring thick glasses; he often yells instead of talking. A singer asks concert attendees to pray for a woman who has a tumor and people raise their hands and pray silently; days later the woman is wheeled onto a concert stage in a wheelchair and the man tells the attendees that this is the woman they prayed for and she is healed.
► A man slams his guitar against a bureau several times until it falls to pieces, finds journal pages inside it, reads them and weeps. A woman is frustrated by not being able to open a pickle jar, so she smashes it on a counter and throws a china plate into the wall, dashing it to bits loudly. A woman locks herself in a bathroom, cries, and slides down the door to sit on the floor. We see mourners as a closed casket is lowered into a grave.
► A man and a woman argue briefly in several scenes. A man sees a male friend kissing a woman in whom he is interested and berates the couple for not telling him they were dating; the angry man turns and walks away quickly. A woman cries in a few scenes and a man becomes tearful several times. A man in a hallway cries against a wall. A man cries loudly in his parked car alone. A woman is tearful as she tells a man that she lost someone close to her and that the example of the man’s wife’s faith changed her life for the better. A man sleeps in a chair by his wife’s hospital bed and plays a guitar when she wakes up. A man sleeps clothed next to his wife and another woman sits in the room. People light many sparkler fireworks at a beach at night.

I Still Believe SUBSTANCE USE

– A man injects a clear liquid that he says is for pain into a woman’s IV line.

– Faith can carry believers through tragedies and ease questions about God. 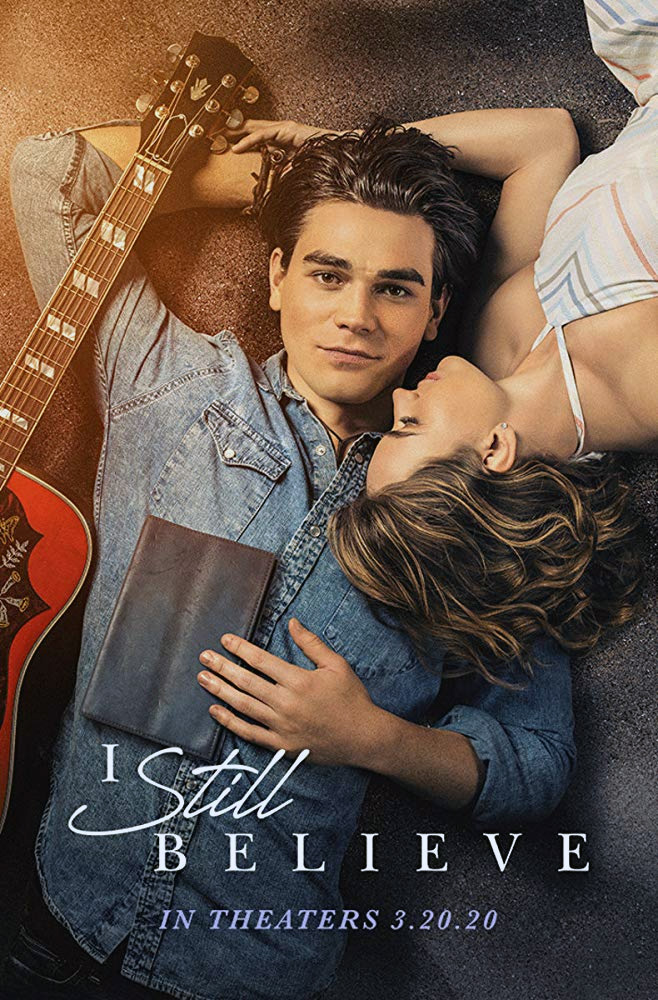