SEX/NUDITY 2 - A husband and wife kiss passionately (it's played for laughs). A girl flirts with a boy and touches his face, a man tells his wife their new baby looks like her boss (implying infidelity), and a man says a woman will be all over him like a fly on something stinky. It's implied that a man dreaming about kissing a woman is actually kissing a dog's bottom. A woman wears a couple of slightly cleavage-revealing outfits (in one scene she wears a tiny Santa Claus suit); in one scene we see a close-up of her cleavage before a man falls face-first into it. A woman briefly adjusts her clothed breasts.

VIOLENCE/GORE 3 - Some slightly suspenseful (and potentially frightening) scenes: a girl screams when she is surprised by the Grinch, then falls backwards into a chute with lots of packages and heads toward a stamping machine that nearly crunches her (at the last second she's pulled out by one leg); an angry boy yells at his classmates, knocks down a stack of presents, and throws a tree across a room; a man takes a swig of alcohol and then breathes a large fireball onto a Christmas tree, burning it to the ground; a man bullies people out of their car and then drives recklessly through a town, nearly hitting many people before crashing (the car explodes, but no one is injured); a sleigh with a child on it nearly falls off the top of a mountain (a man falls face-first in the snow when trying to stop it); a sleigh careens down a mountain, hits a tree and nearly hits a few people (two people who try to stop the sleigh are dragged behind it); and a man clutches his chest, falls backwards onto the ground and groans as if in great pain (eventually we learn he's fine). The rest of the scenes are mostly played for laughs: a girl playfully smacks a boy's arm; a man hits another's face with a spitball; a man breathes a green cloud on another, causing him to faint; several intentional pushes or bumps, sometimes causing people to fall down; a man bounces off a few things and then hits a woman, knocking them both to the ground (he lands face-first in her cleavage); a man dressed like a crash test dummy drives himself into a wall (he's dazed but otherwise fine); a man's head is repeatedly hit with cymbals; a man hits himself in the face with a hammer and is knocked out; a man accidentally sews his finger to a cloth; a man gets stuck in a chimney and then hits his head on some logs below; a man completely wraps up a girl in wrapping paper; a man grabs a girl's arms and leans over her; we see a large cane about to hook a man's neck (it's implied his clothes are stolen from him); a dog bites a man's buttocks; a man throws a dog into a snow pile and then pulls it out by its neck; a cat is sucked into a large vacuum but isn't harmed; a cat jumps onto a man's face a couple of times; a few times we see people flying through a garbage chute and landing in a garbage pile or a snow pile (in one of the scenes a man opens a trap door, causing a girl to fall down the chute -- she giggles the entire time); what turns out to be a fake monster head with big teeth frightens two boys, causing them and two others to tumble down a mountain (they have ice on their faces, but they're otherwise fine); a couple of times bikes and cars run into each other, but no one is injured; a man throws garbage at another's picture; a man unsuccessfully tries to frighten a child by yelling at her, making strange faces (which we see in close-up), jumping around and tearing his shirt off; a man pulled by a sleigh skis recklessly down a mountain and eventually lands on top of the sleigh; a sleigh rolls and seems ready to crash while flying through the air (a dog falls out of the sleigh but then falls back into it a little later); a bed (with a man sleeping in it) is pulled by a rope through a wall and into a town's square; a woman shoots lights onto her house with what at first appears to be a machine gun; a man knocks things off a table; a boy draws a picture of a missile hitting Santa Claus's sleigh; a man deliberately scratches a car; a man gives two kids a saw and tells them to run really fast with it; a man says he'll "gut" someone "like a fish," yells that he hates several people, and tells a crowd of people, in not so many words, to kiss his behind; a baby belches loudly; lots of food is shoved into a man's mouth, and we see him chewing it and spitting some out; a baby takes a bite of a plate, a man eats a glass bottle (he's not cut), and a man eats a red-hot bolt; we see a close-up of bugs crawling on a man's teeth; and a boy has lots of small pieces of bloody paper stuck to his face (it's implied he cut himself while shaving).

LANGUAGE 1 - A couple of mild obscenities, most remarkably the single utterance of the snowboarding and skiing term "bitching" in reference to snow.

DISCUSSION TOPICS - Christmas commercialism, mean-spiritedness, kind-heartedness, being different, being ostracized (and wanting to be ostracized) from one's community, reaching out to others, winning ungraciously, how babies really arrive (the movie says all babies are delivered via bassinets falling from the sky, which we see in one scene), celebrating the true meaning of Christmas.

MESSAGE - The meaning of Christmas shouldn't be wrapped up in gifts. 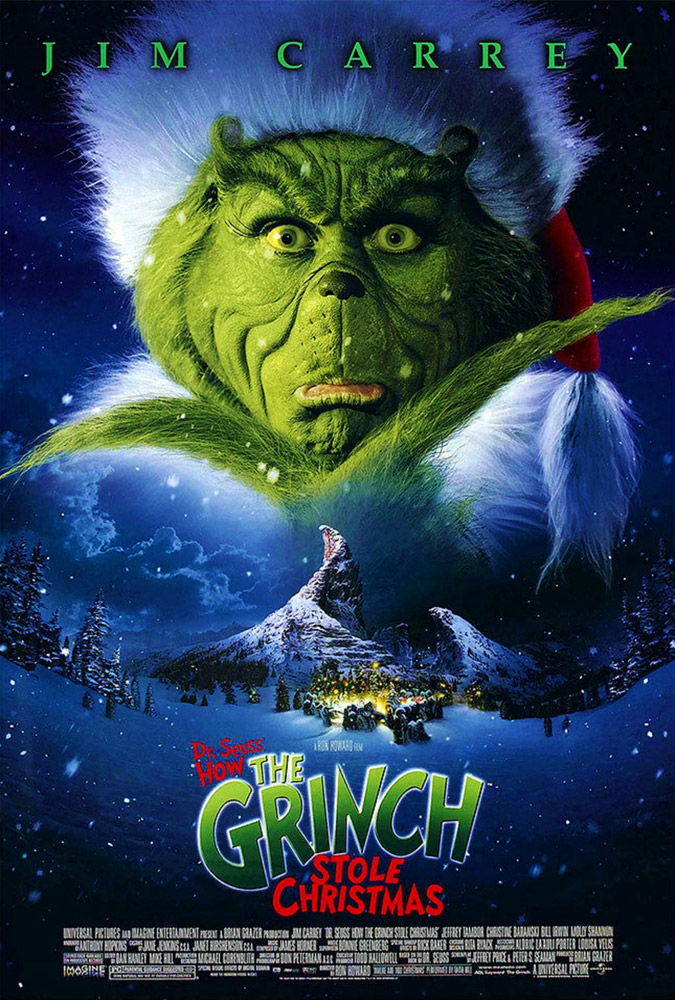