Animated Disney film about the animals-in-residence on a small western farm, that take it upon themselves to ensure that the farm will not be sold to an unscrupulous, yodeling cattle rustler who masquerades as a wealthy businessman. With the voices of Roseanne, Judi Dench, Jennifer Tilly, Cuba Gooding Jr., Randy Quaid and Steve Buscemi. Directed by John Sanford & Will Finn. [1:16]

SEX/NUDITY 1 - Amorous bulls flirt with cows and try to join them, in a few scenes (they say things like, "Maybe we can help each other," and the cows respond with "take a cold shower"). In one scene the cows are welcoming to amorous suggestions.

VIOLENCE/GORE 3 - We hear that cattle rustlers steal a herd of cattle and that a farmer was left broke and having to abandon his farm; we see a flashback to the scene where a man with glaring eyes laughs maniacally. Three cows charge a man, he pulls a gun, the man is pelted with cans, he's tossed into mud, then in the air, then shoved into a train chimney, a bell is shoved in his mouth and he is tied with a rope. A flash flood sweeps cows in the flow, one is dragged under water but is saved. Two trains barrel down on each other on the same track, they switch in the nick of time, and one jumps the tracks and charges toward a farm where people run and scream. Dynamite explodes in a mine, a mine car is thrown through the air landing on train tracks, and a train barrels down on the car (with a man and animals inside). An out-of-control wagon runs a man down (he's OK). A man grabs a man around the throat, squeezes him, the man's face turns red and he struggles. A rabbit hits a man in the head with a pot, hogties him, and puts him in a mine car that speeds along the track. A man punches two men on top of the head, a man squeezes a man's hand, and a man threatens two men by holding a hot brand near their faces and swinging it at them. A horse kicks a man, he sails through the air, the man swings a shovel at the horse, the man draws a gun and the horse does martial arts. A cow lands on a man and knocks him out, and a man is hit in the head with a horseshoe. A horse tries to throw its rider. A man yells at men in several scenes, and two cows argue. A horse scares another horse away (he runs in a panic) and a buffalo kicks a horse into the air. A horse knocks into a cow nearly pushing her off the side of a ledge. A buffalo is shoved off a ledge. We hear a gunshot that puts out a fire. A man ties up three cows. Boys set off firecrackers, cows are frightened and run through a saloon and onto a stage where they fight with dancers, tearing up the saloon, and breaking furniture, while men start fighting each other (one gnaws on another's leg, and one punches another in the face repeatedly). Chickens panic and flutter. A large dust storm blows into a town followed by a menacing-looking bounty hunter on a horse. A cow pokes and shoves another cow and they end up wrestling and landing in a mud puddle. A buffalo threatens a horse. A rabbit and a goat fight. A cow swats a horse in the face with her tail. A horse imagines doing martial arts moves against other horses and cowboys in a few scenes. A cow crashes down on a goat. A horse runs into a post and knocks his head, and two bulls run into a pole. A goat is hit on the head with a can. Three piglets jump on a goat, they pull on his beard, and try to take a can away from him. A rabbit runs into a cactus (we see a few thorns sticking out of him), a duck is knocked down by a thrown ear of corn, a rabbit's peg leg catches fire (he puts it out), and a rooster falls off a chimney. A rabbit chops up a scorpion. Vultures circle over a cow who is singing badly. A large cow walks across a bridge causing it to sag and knock a turtle swimming below under the water. A rabbit's ears are caught in a wagon wheel, he is tossed through the air, he lands in a birds' nest and the birds peck him a few times. A woman worries about losing her cows and her farm. A man picks his ear and flicks a chunk of wax off his finger. Animals burp loudly a few times. There are a few udder jokes.

SUBSTANCE USE - People are shown drinking alcohol in a saloon.

MESSAGE - Family and hearth are worth fighting for. 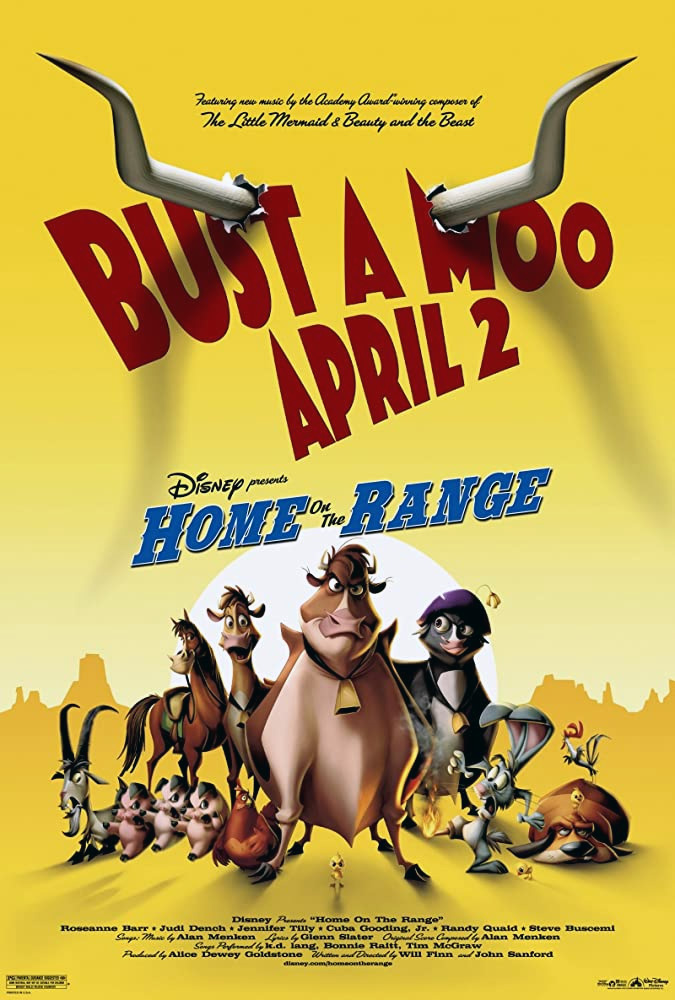