Animated tale, where the delicate balance between good and evil is kept in check by the wizard of Fairy Tale Land (voiced by George Carlin). But when he decides to go on vacation and leaves his two assistants in charge, things go array and the familiar happy endings begin to skew in other directions, as when Cinderella's (Sarah Michelle Gellar) tale is tampered with and it's not the prince (Patrick Warburton) that saves the day. Also with Sigourney Weaver, Freddie Prinze Jr. and Andy Dick. Directed by Paul Bolger. [1:25]

VIOLENCE/GORE 3 - A young woman and another woman fight over a magic staff, the woman holds it across the young woman's throat, and the young woman punches and shoves the woman, who falls into a "portal" and disappears.
► A young woman runs from a woman on a flying broom who is shooting laser beams at her, the young woman stops at a ledge, and the woman grabs her as she flies overhead.
► We hear a man who's being beaten by trolls (he screams and yells and we see the trolls carrying him upside down).
► A woman with a magic staff holds a girl in a laser shield, and she then blast a young man and throws him against a pillar (he is unconscious).
► Trolls, giants and other sundry "bad guys" march toward a castle, they threaten two guards standing at the gates (we hear punching and screaming), and they break the gates down and force their way in.
► A woman is pushed off a ledge and she falls a great distance (but she comes back). A man on horseback crashes hard into a fallen tree (he slides to the ground but recovers quickly).
► Two animals fly on a magic carpet, the carpet is struck by a blast from a magic staff, it catches fire and the two riders fall to the ground with a thud. A young man and a young woman crash-land. A witch is struck by something and falls to the ground from her flying broom.
► We see a wolf snap at a girl and hear it snarling while the girl screaming. A wolf snarls at three characters, and they run and hide. Two young women push and shove and elbow each other in several scenes.
► We see a girl being pulled out of a tall tower by her very long hair and she lands on top of a man who's far below.
► A boy is stepped on by a giant and we see the boy flattened and stuck to the bottom of the giant's foot (the boy is eventually OK). A giant is zapped by a magic staff and is shrunken.
► A man takes an infant away from a woman.
► A woman is turned into a bird and the bird eats a frog (we see the frog force its way back out of the bird's beak). A girl kisses a frog, a strand of goo drips between them and the frog slurps it up.

SUBSTANCE USE - Wolves drink something from mugs and it is implied that it is alcoholic.

MESSAGE - Dreams can come true but sometimes they might not be exactly the way you dreamed them. 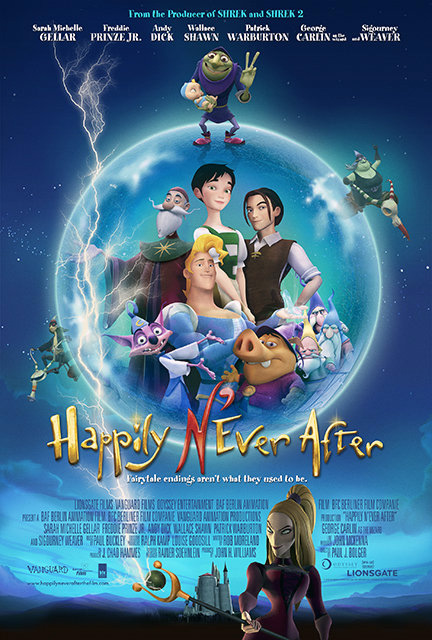