In the near future a woman (Scarlett Johansson) awakens in a laboratory to find herself in a cybernetic body she cannot feel, and also devoid of memories. Trained and put into service as an anti-terror specialist, she searches for the truth about her past. Also with Pilou Asbaek, "Beat" Takeshi Kitano, Michael Carmen Pitt, Juliette Binoche, Chin Han, Danusia Samal, Peter Ferdinando, Kaori Momoi, Anamaria Marinca, Daniel Henshall, Lasarus Ratuere and Yutaka Izumihara. Directed by Rupert Sanders. Several lines of dialogue are in Japanese with English subtitles. [1:46]

SEX/NUDITY 4 - In many scenes, both close-ups and long shots, a female human-android hybrid appears in a tight, opaque, flesh-colored body suit that is her cybernetic body; it shows buttocks and features transparent covers over the material at the breasts, emphasizing curves creating an illusion of nudity, but no nipples or genitals are exposed or outlined. A female human-android hybrid removes a wet suit and we see lifelike skin on her shoulders, back, and the side of one breast. A female human-android hybrid's legs and thighs are covered in thin tights and are exposed in the slits in a long coat.
► A club scene features large hologram boxes in which women in android body suits writhe and dance (we see body outlines and the curves of breasts and buttocks); one hologram box shows two shirtless men wrestling, exposing bare backs and thighs in long shorts. A man in a washroom at a urinal that is below the screen looks at the person beside him, who turns, and we see a male android wearing female attire, reaching below the frame and shaking something (we do not hear urination or see flesh).
► A 40-foot hologram woman wearing a blue bikini lifts a barbell as we see cleavage and midriff. A desk figurine of a nude android woman is seen from the back, with bare buttocks and thighs shown. A nude, genderless android lies in a glass case and the "skin" on thighs and legs is metallic silver; the rest of the body is covered in red artificial muscle.
► A prostitute on a street corner wears a miniskirt that bares her legs to the tops of the thighs; an android woman takes her home, where we see the prostitute wearing a tank top (we see the outlines of nipples briefly), and her thigh-high hose ends at the top of her thighs, where the skirt is pulled up.
► A human-android man removes a hooded coat to show a metallic patched-together upper body covered with plates of silver, copper, and gold, with what looks like human skin on one shoulder. Several men are shown shirtless as they sit on the floor of a warehouse. A man lifts his shirt to show a large Y incision on his stomach.

SUBSTANCE USE - A human-android hybrid injects yellow memory blocker into two ports on the back of her head on several occasions. Saki bottles are shown in front of men in a restaurant, a man drinks from a can of beer in a few scenes, and a man in a bar picks up a bottle of unknown substance and breaks it on the floor below the frame. A man smokes a hookah and another man holds an unlit cigar, a woman lights and smokes two cigarettes in a laboratory, and an ash tray is filled with cigarette butts.

MESSAGE - Projects in the near future to combine human brains with cybernetic bodies may lead to disaster. 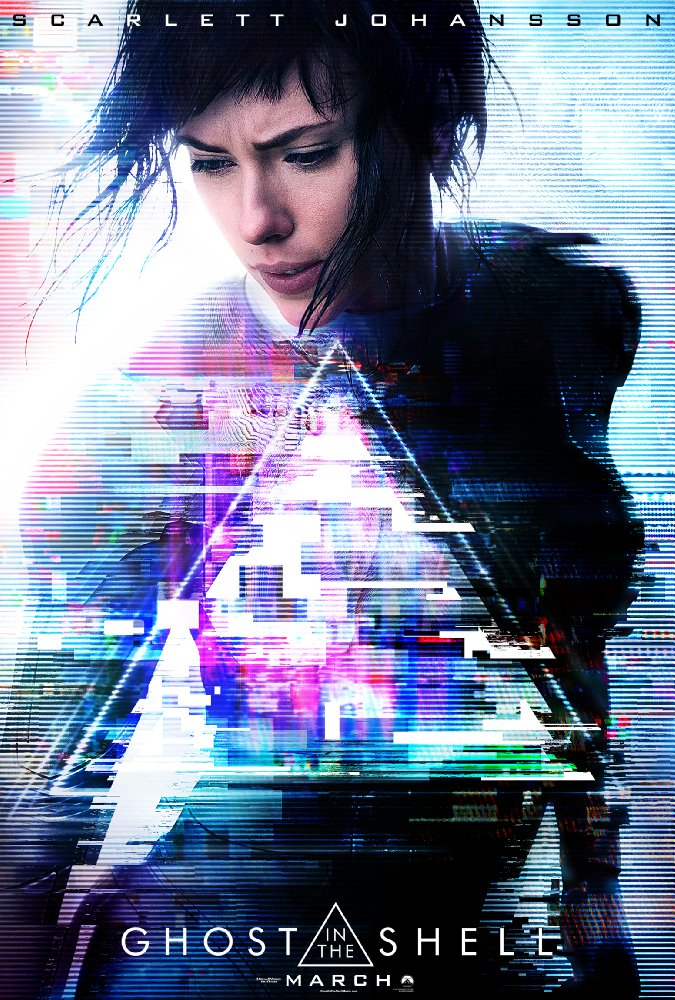