Sort of an unofficial sequel to director Steven Soderbergh's "sex, lies and videotape," it concerns a group of L.A. residents who are linked together through the making of a movie, and by the shared desire of being loved, as well as successful. With Julia Roberts, Blair Underwood, Nicky Katt, Catherine Keener and David Duchovny. [1:46]

SEX/NUDITY 7 - We see a fully nude (including genitalia) dead man lying on a bed -- a woman explains that he died because of, "a weird sex thing" -- since his face is covered with a plastic bag, it may be inferred that it involved self-asphyxiation. A man goes into a woman's hotel room and we see them having sex, but the images are distorted: we hear them moaning and see blurred body parts and movement, and then the image clears and we see them lying in bed together -- his chest is bare. While getting a massage, a man becomes visibly aroused (we see the sheet that covers him rise), and he convinces his masseuse to stimulate him (we see her after the fact, as she goes to wash her hands in the bathroom). A woman wears a halter-top and low slung hip-huggers that reveal the side of one of her breasts and her bare back down to the hips. A woman (a VP of Human Resources) appears to be making a pass at a younger man who happens to be an employee and a subordinate. A woman asks another woman if she finds her attractive. A man kisses a woman, and a man and woman kiss. We see a woman sleeping in bed in a couple of scenes; she appears to be nude, but covered by a sheet (we see her bare back and shoulders) and a man kisses and caresses her back. There are several discussions about pornography and how "porn names" are created. There are several frank discussions about sex -- one man in particular discusses his inability to have sex with his wife because of the size of her self-stimulation device. A man and woman are shown in bed together. A man and woman look at each other longingly, come close together and touch their cheeks. A man wears a robe and when it falls open we see his bare chest and bare thighs. A man reaches into his pants (apparently applying cologne to his genitals). A woman wears a tight-fitting, figure-revealing dress. We see men getting massages in a couple of scenes: a woman rubs their arms, legs, feet and bare backs.

VIOLENCE/GORE 4 - A man is found dead with a plastic bag over his head and face. A man talks about drinking blood. A woman talks about how she and her sister found their father dead from an apparent suicide when they were young. A woman talks about her father "killing" people's spirits. We see a man using a urinal (we hear nothing and he is blocked by a tiled wall). A dog is very ill (he lies limp in a man's arms) after eating a pan of brownies laced with hashish. A man passes out and lands on the floor. A man yells at and insults another man a few times.

SUBSTANCE USE - People are shown drinking alcohol and smoking cigarettes. A man and woman apparently eat some hashish-laced brownies.

MESSAGE - We all need love and respect.

(Note: There are a couple of discussions about African-American roles in movies and the fact that African-Americans are not cast as romantic leads. One of the storylines in the movie revolves around a play called "The Sound and the Fuhrer," about Hitler's personal life -- we see swastikas and Nazi banners.) 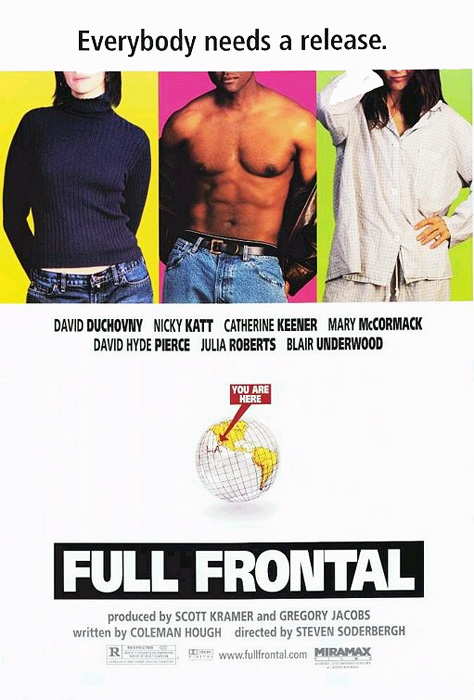