SEX/NUDITY 6 - Sexual innuendo (including a reference to homosexuality). In several scenes, we see men watching a pornographic movie of an obviously nude man and woman having intercourse in various positions with thrusting and moaning (their faces and bare shoulders, arms and backs are visible). Twice we hear people moaning sexually; in one scene we see a man thrusting on top of a woman (his back and the top of his buttocks are visible and we briefly see her bare breast), and in the other scene we briefly see a scantily clad couple rolling around in a bed. A clothed woman straddles a man sitting on a couch, kissing him passionately; we briefly see his underwear as he gets up and buttons his pants. We see a woman's bare breasts, buttocks and back as she's showering, and we see her bare breasts in another scene. We see several scantily clad women dancing in a bar and a woman wearing a very short skirt and a cleavage-revealing shirt.

VIOLENCE/GORE 10 - Several people are impaled by knives, poles and a bull's horn; green goo, foam and blood pours out of their bodies and their flesh quickly decomposes. A man chokes a nude woman, pushes her into a mirror (we later see big shards of glass sticking in her bloody face) and decapitates her with a shard of glass (her head rolls into the bloody bathtub, and we see it there again in a later scene). A nude woman is attacked by bats in the shower and we see her bloody body lying in the bloody bathtub (her bare breasts and shoulders are visible); later we see bloody water overflowing onto the floor. A man is pushed onto a telephone pole hook; we see the hook coming out of his mouth and blood on his face and clothing. A very bloody man pulls a bullet out of his stomach (we hear squishy noises) and then falls to the ground (blood splatters as he hits). In one scene, lots of gunfire is exchanged and we hear screams; in several scenes, lots of people are shot -- sometimes repeatedly -- but we rarely see more than a few holes in their clothing before they fall to the ground. Many people are attacked by bats or bitten by vampires (we see lots of blood squirt on their clothing and nearby objects and bloody marks on their bodies). A man strangles another; a man wraps a cord around a woman's neck and pushes a fan's uncovered spinning blades toward her face as the scene ends. A man is thrown from a building and electrocuted by some wires, then falls onto a car. A man throws a knife into a man's leg and a man stabs another, then licks the bloody knife. We see many corpses, some decomposed and some with bloody bite marks all over them. A head is thrown at a wall and leaves a bloody mark. A few bats are shot; we see a few with bloody wounds and some flailing in puddles of blood. Many scuffles with many people thrown into walls, poles, cars and plate glass windows. A man hits one man with a parking meter and another with a street sign. Several cars explode and a man bursts into flames. A man squeezes another's crotch, a man is thrown over a fence by a bull and a man is nearly hit by a car.

LANGUAGE 8 - About 26 F-words, lots of anatomical and scatological references (including one anatomical reference seen on a sign) and lots of mild obscenities and insults. 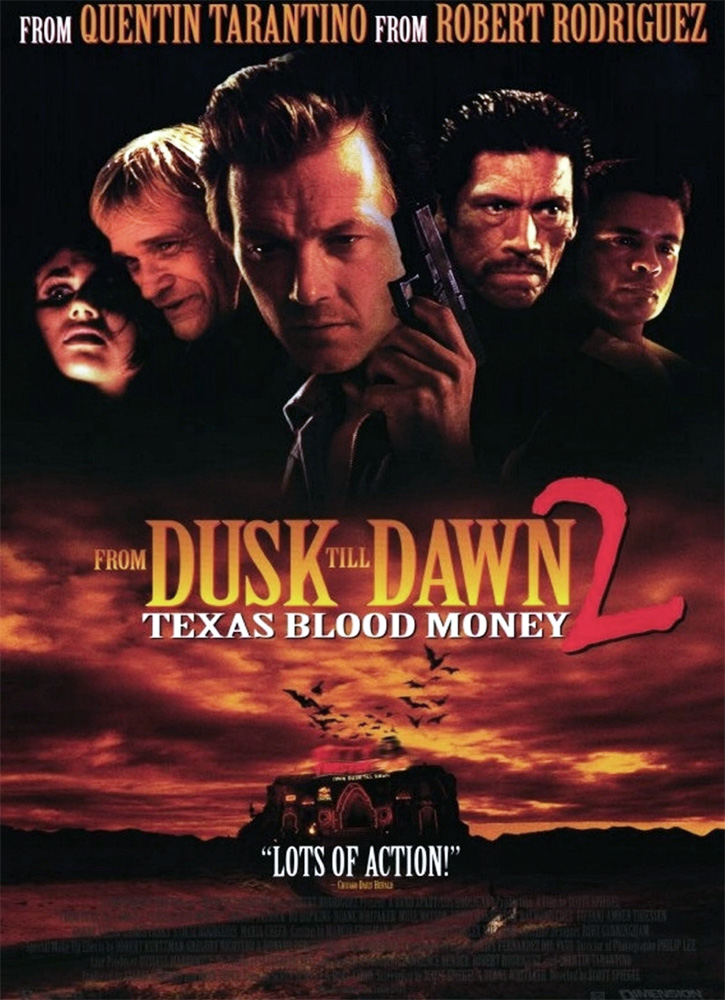