Samuel L. Jackson stars as an American master chemist who goes to England, hoping to introduce a new designer drug to the European underworld. His plans hit a snag when he gets stuck in Liverpool with an unlikely escort (Robert Carlyle) and becomes entangled in a web of double-dealing and double-crosses. Also with Emily Mortimer, Rhys Ifans and Meat Loaf. [1:32]

SEX/NUDITY 6 - A man and woman kiss passionately, caress each other (the woman's shirt lifts up exposing lace panties), the man removes his shirt (we see his bare back), his head dips down below her waist, and they tumble into a bathtub and toss back and forth kissing. We then see their underwear fall onto the floor, he pulls off her shirt (the side of her breast is visible) and we see thrusting and hear moaning. A man and a woman kiss passionately. A man removes his clothing and slowly walks away exposing his bare buttocks. A man talks about incest between his sister and father. People put tablets (they're drugs) in each other's mouths suggestively. A man's kilt rises at his crotch suggesting arousal (it is not) while another man is making remarks about his endowment. People dance close together at a party. A woman climbs a ladder and her skirt blows in the breeze exposing her bare thighs, and a woman wears an oversized shirt and we see her bare legs as she climbs the stairs. A man lifts his kilt in the direction of another man (nothing is visible), and a man grabs another man's thigh (he protests). A woman peers up a man's kilt as he sleeps -- we see his thighs, while the rest is in heavy shadow. Women wear outfits that reveal cleavage, bare abdomens, bare backs, shoulders, thighs and a woman wears a skin-tight leather outfit. A man describes the effects of a drug as being better than the feeling one has "after sex." A man opens his coat and he's wearing a bra.

VIOLENCE/GORE 8 - A shooter fires a weapon into a room full of people and we see many getting hit by bullets; one man is shot in the neck and blood spurts, several men are shot repeatedly and they jerk around before falling to the ground, we see blood pouring from wounds, and a man is shot in the buttocks (he screams and we see a blood stain on his underwear later). With computer generated images, we travel through a man's intestines and stomach and see liquid bubbling and gurgling inside him; the scene changes to live action, and we see a room from the outside as a glass window is sprayed with blood: the man explodes and we see another man covered with tissue and blood. A man is shot in the chest at close range, blood and matter splatter onto a wall behind him and he falls to the floor dead. A man is shot in the head from a distance, the back of his head explodes, blood splatters, he falls to the ground dead, and a large puddle of blood forms under his head. A wounded man is chained to the bottom of a shipping container that is elevated off the ground, another man pokes him in his wounds (he screams and we see blood on his nose and face), then the container is dropped to the ground presumably crushing the man who was chained to it. A man is shot in the knee, falls to the ground moaning, then gets up and walks dragging a trail of blood behind him. A man is shot in the leg and another man holds two guns to a man's throat. Several men are hit by another man swinging a golf club (we hear loud cracks when it hits them). We see a room full of dead men as the police examine a crime scene. We see a dead man in the trunk of a car and his fingers are slammed in the trunk hatch several times (we hear crunching). A building explodes sending flames into a room full of men; we see them being tossed through the air from the blast and we hear that they are all dead. A man is punched in the face and a gun is pointed at his two companions. A man is threatened with a gun and punched in the face (we see his swollen, bandaged nose later). A woman kicks a man in the face and blood pours from his nose. A woman is knocked off the roof of a building, a man grabs her hand and she dangles for some time. Three men shove a man against a wall in a bathroom. A woman is pulled into a room, thrown back onto a sofa and many men point guns in her face (she screams). A man lights a flare in a crowded pub and throws it into the crowd (he is then chased down the street by a mob). A man drives recklessly; he nearly drives into a truck, he hits another car taking the door off, he drives on the sidewalk nearly hitting pedestrians, he drives the wrong way on a one way street, other cars crash into each other. Two cars face off in a narrow alley, they rev their engines, race toward each other until one shifts into reverse, the other barrels down on him and pushes the car out of the alley into a busy street where a truck crashes into its side. A man races his car off a pier and onto a garbage barge. Many people are threatened by other people with guns in different scenes; a gun is pointed at a man's crotch. A man is handcuffed to a bar and he fires his gun to break the chain. A man talks about ripping out another man's liver. A man talks about his father having abused him and his mother. A man squeezes a boy's face to get him to spit something out, which he does. A man hires an assassin to kill two men. We see someone buying weapons. A man has a large scar on his face throughout the movie, and a man has a large scar on his neck (we hear that he was shot). A woman smacks a man on the back of the head. A group of men have severe stomach pain, flatulate and defecate all over themselves and writhe on a floor covered with feces. We hear three men urinating, and a man sits on a hemorrhoid ring throughout the movie. We see fried pig's blood on a plate.

MESSAGE - Rules are arbitrary. Everyone has a price. 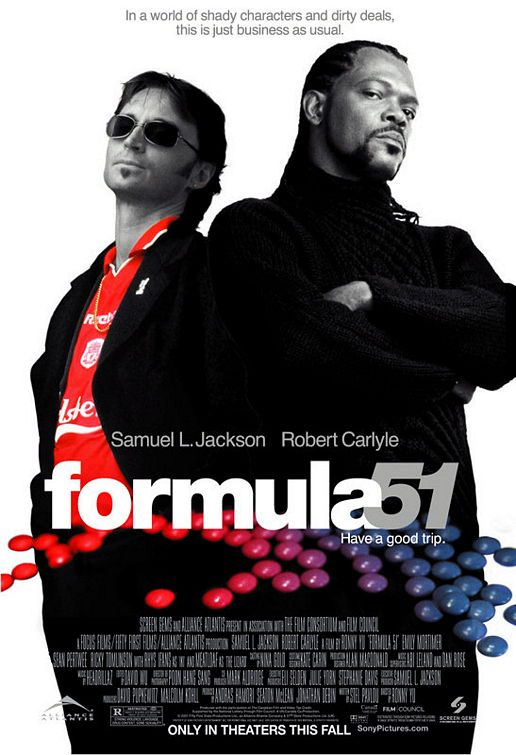