Clint Eastwood directs this account of the fierce WWII battle for the island of Iwo Jima, which concentrates on the efforts of one man to uncover the real story about his father's war experience and the famous photograph of five Marines and a Navy corpsman raising the American flag on Mount Suribachi. With Ryan Phillippe, Adam Beach, Jesse Bradford, Jamie Bell and Ben Walker. Directed by Clint Eastwood. [2:11]

VIOLENCE/GORE 8 - There is an explosion, a soldier disappears in the smoke and rubble and his severed head (we see blood on his mouth and blood and tissue at the neck) lands on the back of another soldier.
► Many soldiers are shot as they walk up a mountain, and there are many explosions behind and around them (blood spurts when men are struck by bullets).
► An explosion throws a soldier through the air, we see him with a very bloody chest wound and a piece of shrapnel embedded in his forehead, and he dies. A soldier is shot in the throat (blood spurts from the wound) and another soldier tries to help him but he dies.
► Enemy soldiers attack soldiers in trenches, and one soldier beats another one with the butt of his gun and then stabs him repeatedly (we hear the crunching of each blow). An enemy soldier is impaled on another soldier's bayonet, we hear a crunch, see him dangling on the bayonet and then see him slump and die. A soldier is attacked and stabs an enemy soldier in the chest and twists the knife until he dies.
► A soldier finds several dead enemy soldiers in a cave and we hear that they are using grenades to kill themselves (we see men with their abdomens blown open, one with part of his head missing, one with a severed limb, and lots of blood and matter).
► A soldier finds another, badly wounded, soldier on the battlefield, and the injured man moans and struggles to put his seeping intestines back into a gaping abdominal wound (we see the intestines and a lot of blood).
► A soldier throws grenades into a gun turret, they explode (presumably killing some of the men inside), and another soldier uses a flamethrower to spray the same turret, and a couple of men run out in flames and are shot.
► Soldiers shoot at each other in several scenes and many are struck by bullets (blood spurts, soldiers yell and gasp and many die. An amphibious vehicle drives over a dead body on a beach and many bodies float in the water).
► A large explosion knocks a soldier to the ground and we see embedded shrapnel in the back of his leg. We see many wounded soldiers on stretchers lined up on a beach (bloody bandages and wounds are visible).
► A soldier finds another soldier in a cave, presumably after he had been tortured (we are not shown anything). A soldier falls overboard into the sea and is left behind to drown. A man collapses on a staircase, grasping at his chest and calling out.
► A soldier holds a knife to another soldier's throat. Police with nightsticks surround a soldier who swings a chair at them. Two men scuffle briefly.
► A soldier runs through a bombed out field, he hears voices calling for him, he is frustrated because he cannot locate where they are coming from, and he wakes up with a start and breathes heavily (it was a nightmare).
► Large guns on ships fire at an island. A ship is struck and a tank explodes.
► Soldiers meet the mothers of dead soldiers and they grieve together. We see a veteran who is missing his arms below the elbows. We hear that President Roosevelt died from a cerebral hemorrhage.
► We see a cake made in the shape of men raising a flag, and then strawberry and chocolate syrup are drizzled over it to resemble blood (a soldier who's watching becomes uncomfortable at the sight). A man vomits of out a moving train (we hear retching), and a man vomits on a sidewalk (we hear gagging and splattering).

DISCUSSION TOPICS - War, World War II, the battle of Iwo Jima, the Iwo Jima photograph, good wars, the futility of war, the cruelty of war, the expense of war, sacrifice, racism, love, friendship, heroes and villains, fraud, fundraising, misrepresentation, trophy mongering, death of a child and loved ones, the appearance of victory.

MESSAGE - Most of the time the heroes and villains are not who we think they are and most of the time wars are a bigger sacrifice of lives and resources than we should be willing to endure. 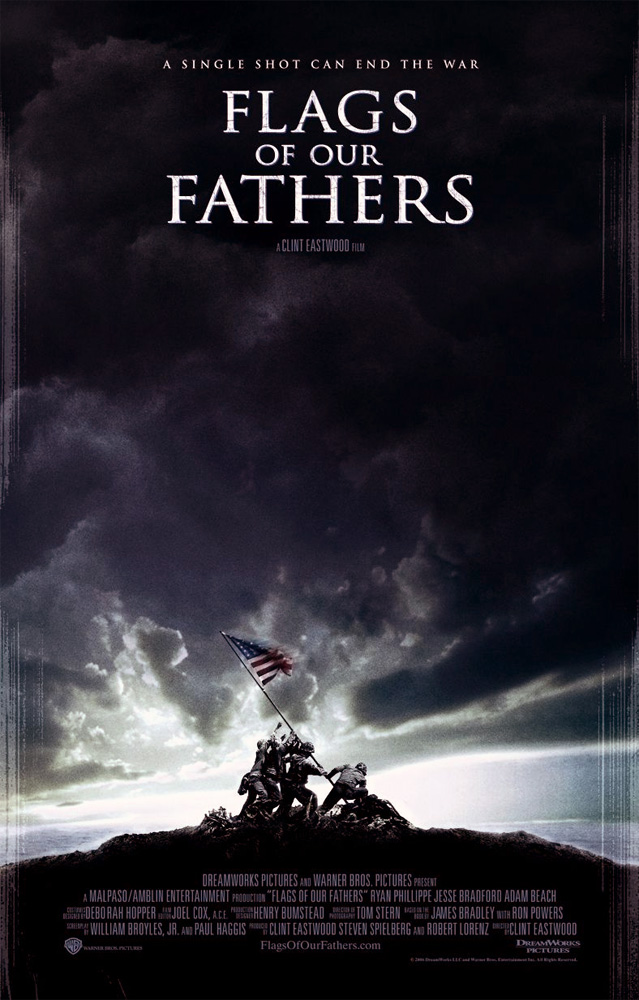