Animated feature about Mr. Fox (George Clooney), who's well known for his incomparable chicken catching skills but promises his wife (Meryl Streep) he'll give it up and become a newspaper man. After some time passes, he is frustrated and longs for adventure, so with the help of his opossum friend (Wallace Wolodarsky) begins to plan one last, big catch. Also with the voices of Jason Schwartzman, Bill Murray, Michael Gambon, Willem Dafoe and Owen Wilson. Directed by Wes Anderson. [1:28]

SEX/NUDITY 1 - A husband and a wife fox kiss and hug. A teen boy and a teen girl fox flirt in a couple of scenes.
► A rat refers to a fox's wife as the "town tart." A fox wife tells her fox husband fox that she is pregnant.
► A fox cub is shown wearing jockey shorts (its fur-covered chest is seen). Two foxes are shown in swimsuits (one long shorts and the other in Speedo-type).

VIOLENCE/GORE 4 - A man says, "Shoot the cuss to smithereens" and "kill them" and three men open fire on a fox and an opossum (we see the fox's tail lying on the ground and a bit of blood at the end which was attached). Many armed men open fire on animals (they are OK).
► A fox stitches up a wound on the back of another fox where his tail used to be (we see a patch that appears to be a bit blood stained).
► A fox and a rat fight: we see them punching and slashing each other, we see the rat motionless on the ground with red slashes across his throat and then Xs appear on his eyes (indicating that he died). A rat and a fox fight: the rat spins the fox around and throws him against a cider vat. A wife fox slashes at her husband face (we see a scratch appear on his cheek) and they argue bitterly.
► A rat with a switchblade threatens a fox and an opossum, and then lunges at the fox. A fox and a badger snarl and claw at each other (neither is harmed). A fox and an opossum flash like an X-ray when climbing over an electric fence and we see their skeletons (they are OK).
► Three men use explosives to try to kill animals that have dug themselves deep into the ground (we see a hole but no evidence of the animals being harmed). Armed men take positions and prepare to shoot and kill many animals. Two foxes are trapped in a cage and two men approach carrying a pitchfork and a shovel (we do not see an attack and we understand that the foxes get away unharmed).
► Two foxes sneak through a squab farm, past a security shack, past a man sharpening his hatchet and into the squab barn and one appears with a limp bird in its teeth. A fox holds a chicken in its teeth, an opossum gnaws at another chicken and complains that he can't kill it with one bite, that it is so grisly and there's blood (we do not see any blood). A woman holds a fox upside down by the paw and a man tells her to take it away and kill it. A beaver bully pushes a wad of mud into a fox's face, another fox strikes the beaver and he falls on the ground and whimpers.
► A rabid dog chases after several men, the men climb on top of shelters, and the dog grabs and tears off a tie that one man is wearing (it actually is a fox tail). A rabid dog foaming at the mouth chases a fox.
► Three men with large digging machines dig around a tree where foxes and an opossum live. Animals in a tree house hear pounding outside, a fox yells, "They'll kill the children," another fox yells, "They're digging us out," and all of the animals begin to dig deep into the ground.
► Flaming pinecones are launched out of a manhole, several buildings catch fire, three men are shown with their clothing on fire, and a large explosion rumbles underground.
► Two foxes shoot out through a cider pipe in a factory. A fox trapped in a crate falls from a large storage container, the crate breaks open and we see the fox lying on the floor (he seems OK). Several animals are startled by a large wolf watching them in the distance; one fox admits to having a phobia of wolves and they all leave.
► We hear that a fox's father is sick with double pneumonia. A fox talks about being "killed, stuffed and hung over the mantle piece." A fox tells another fox, "We all die unless you change." An animal tells a fox that, "A lot of animals are going to die because of you." An animal makes a remark about being "down to a bloody stick with your eyes gouged out." A fox talks about a plan to steal chickens from a farm and describes how to kill a chicken with one bite. A beaver is asked if he is a bully because he makes fun of how a fox dresses. A fox is told that the tree he wants to live in is the most dangerous place for him to consider. We hear a song about Davy Crockett with lyrics that include "He killed a bear when he was three." A fox says "I've been stealing birds since I was young." A fox talks about his phobia of wolves and an opossum talks about his phobia of thunderstorms. Three men are described as "the meanest, ugliest farmer," "potty-belly dwarf," and "the scariest man on the planet." A fox apparently spread a rumor about another fox having beagle ticks and pelf lice.
► A man eats a drug-laced blueberry and collapses. A dog licks a drug-laced blueberry, its eyes go blank and it collapses. Three dogs eat drug-laced blueberries and keel over (they are just sleeping). A fox gobbles down a pile of French toast in an animal-like fashion. Two foxes eat ravenously. A fox describes that a man makes his own donuts stuffed with goose liver. A teen fox spits in several scenes. A man wears a tie made from a fox's tail.
► A beaver lights a pine cone on fire, the cone is pitched to a batter who hits it, it flies through the air, and others run and throw pine cones into a barrel. We see a warning sign with the image of a person being electrocuted by an electric fence in a couple of scenes.

SUBSTANCE USE - A fox laces blueberries with a sedative. Two foxes and an opossum drink wine, a rat drinks alcoholic cider through a straw, a man is shown drinking alcoholic cider, a fox opens a bottle of champagne, a fox says "I've had too much to drink," a man says he drank three gallon jugs of cider the night before and wants three tonight, and we are told that a man lives on alcoholic cider. A man is always shown with a cigarette in his hand or in his mouth.

MESSAGE - What you think you are is not always what you are. Don't deny your true nature. 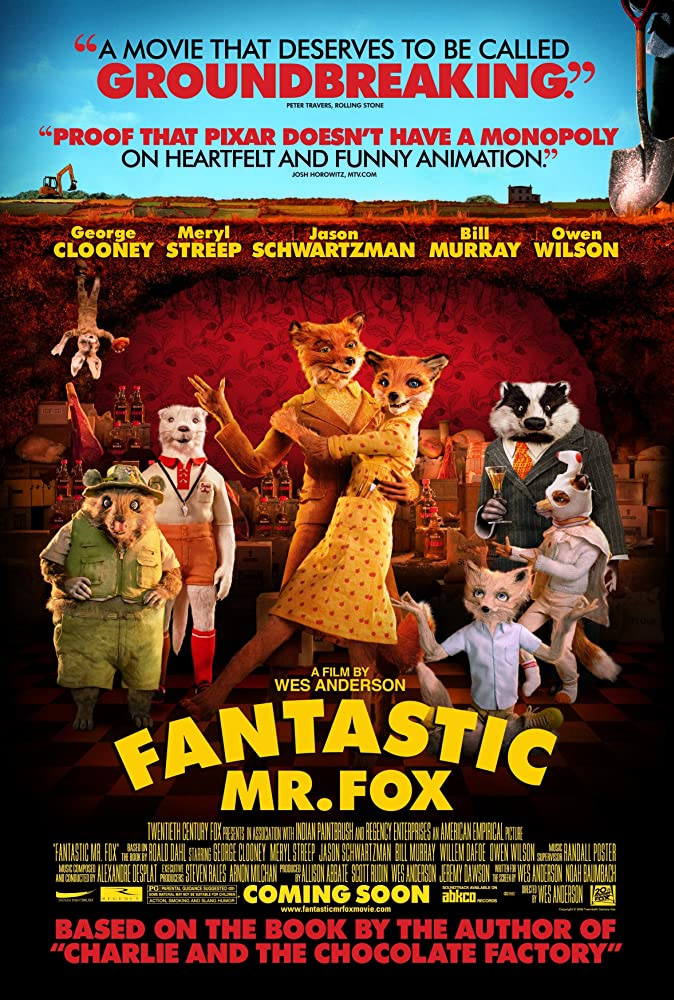