After a devastating breakup, a young man (Josh Hartnett) has a number of meaningless sexual encounters trying to forget his ex. When he realizes these affairs are not helping him to recover he takes a vow of celibacy and by doing so he realizes that sex is not important in finding a true soul mate. But just when he decides he's in control of his emotions and impulses, the woman of his dreams (Shannyn Sossamon) comes along -- and so does temptation. Also with Vinessa Shaw, Monet Mazur, Maggie Gyllenhaal, Emmanuelle Vaugier and Keegan Connor Tracy. [1:31]

SEX/NUDITY 8 - A man caresses a woman's body with a flower, blows a flower petal toward her panty covered crotch, and she has an orgasm; she then caresses the man's body with a flower -- we see the man bare-chested and the woman nude to the panty line, with her breasts covered by flower petals. A man and woman roll around on a bed kissing and fondling each other (they are both in their underwear) and we see them later having sex with her on top of him moving rhythmically until she climaxes (we see her bare breasts and his bare chest). A man and woman are shown just ending a sexual encounter; the man is bare-chested and we see the woman's bare back and buttocks as she walks away from the bed. A man and woman kiss passionately and we see his tongue probing her mouth, and another man and woman kiss passionately. We hear a man and woman having sex, with groaning and moaning. There are a few scenes where women try to seduce a man: a woman closes herself in a room with a man, unbuttons her sweater, sits on a copy machine, spreads her legs to expose her panty covered crotch and fishnet thigh-high stockings and makes a photocopy of her buttocks; two other women corner a man in a storage room and begin kissing each other (we see their tongues) as he watches, and another woman touches a man's face and tells him how hot he makes her. A woman is seen straddling a man who's in his boxers, handcuffed to the bed, and presumably asleep. A Catholic priest and a nun are interrupted while kissing. A man is shown with a visible erection several times: through his pants, his towel, and his pajama bottoms. A man goes into a bathroom with plans to masturbate (he begins to unbutton his pants) and hears another man masturbating in the next stall (we hear panting and see his feet jumping up and down). Throughout the movie men talk about women being hot and wanting to have sex with them, and there's a lot of sexual talk and innuendo: there are several references to masturbation and a few sexual hand gestures, a woman asks "is there anything I can do...anything" with a suggestive glance, a man says that another man "works a different girl every night," a father talks to his sons in detail about his sex life with their mother, a married man discusses his sexual frustration with his wife not being interested in having sex anymore and says that they "used to have sex everywhere," and a man uses sports metaphors to describe a sex act and parts of the anatomy. Two men spike a man's juice with Viagra and we see him with a laptop over his lap (presumably hiding an erection), a woman eats a banana suggestively, and a man licks and sucks on a piece of fruit which resembles the female sex organ. A man looks longingly at a woman wearing a mini-skirt, fishnet stockings and thigh-high leather boots (he pants, perspires, and bends over to pick up something from under her legs). Many women are shown in outfits that reveal cleavage, bare shoulders, thighs, and bare abdomens. We see covers of pornographic videos and magazines that show women's bare breasts and buttocks and we also see a porn web site showing women with bare breasts. A man imagines many women in sheer tops and no bras, and then topless women (we see many breasts and nipples), a man dreams that he is flying over a sea of bare breasts, and a man dreams that he opens a washing machine door and liquid pours out (it represents his ejaculation). A man and woman kiss, hug and hold each other. A woman leans in to kiss a man and he pulls back. A man and woman are pushed close together while riding on a crowded bus. We see a computer-generated image of a man in a chastity belt, and a man caresses a Mrs. Butterworth's bottle. There are conversations about pornography on the Internet.

VIOLENCE/GORE 2 - A man has a recurring dream about the ceiling over his bed cracking and opening into a black hole. A man's shirt catches on fire from a flambé dish in a restaurant, a man slaps a man in the face, a man is knocked on the head by a door, a man falls hard on the ground when trying to avoid a woman's kiss, and a man falls on the ground when he jumps out a low window. A man tries to throw a used condom out a window but it sticks to the glass. People yell and argue in several scenes.

MESSAGE - It's not the sex that makes the relationship.

(Note: Christians, especially Catholic Christians, may be offended by the treatment of Lent, temptation, and celibacy and the priesthood -- particularly by one scene that depicts a priest kissing a nun and acknowledging feelings of lust.) 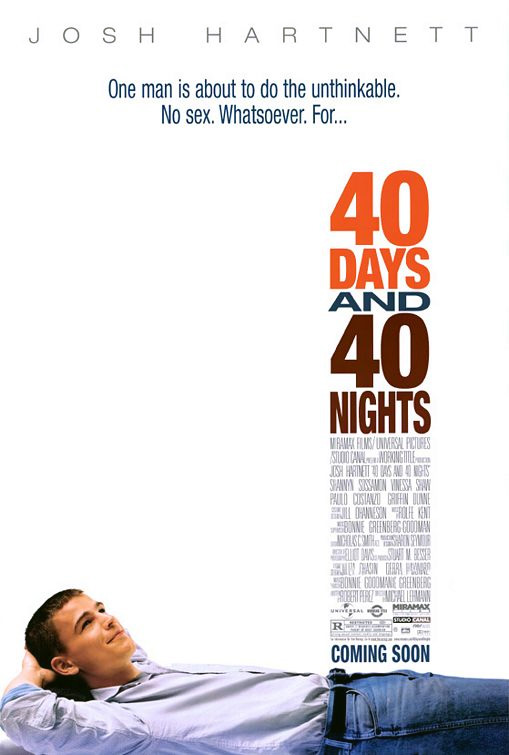