A film crew travels to the Austrian Alps in order to film three extreme sports enthusiasts being chased down by an avalanche for a commercial. When they inadvertently film a Serbian war criminal whose secret hideout is in the Alps, a life-or-death chase ensues, which includes skiing, snowboarding, sky diving, and other extreme sports. With Devon Sawa, Rufus Sewell, Bridgette Wilson-Sampras, Heino Ferch and Joe Absolom. [1:33]

SEX/NUDITY 4 - A young woman takes the bubblegum out of another young woman's mouth with her own mouth (it looks like a kiss) and we see this scene again on video. Two young women kiss briefly (they are being forced by a man with a gun). A young woman dares two young men to roll in the snow and climb a cable "naked"; one young man does, and we see his bare buttocks and a shot from the front that has his crotch heavily shadowed. A man and a woman hug and kiss. A woman unzips her sweater in front of a man, we see her bra and cleavage and she looks at the man suggestively. A young woman's pants tear off while she is being held over a cliff (we see her bare abdomen and panties). A young man leans in to kiss a young woman and she splashes him. Two young men are bare-chested in a hot tub and two young women join them in swimsuits. A young woman takes off her sweater and is shown wearing a tight tank top that reveals her ample endowment. People dance closely in a nightclub. A singer wears a mini-skirt and tight top that reveal cleavage, and stocking-covered thighs. Two young men admire a woman. A man talks about another man having an operation to replace his genitals. A young man talks about his sexual fantasy.

VIOLENCE/GORE 5 - Two men shoot each other, fall to the ground dead and are buried under snow when an avalanche starts. A young woman jumps from a staircase onto a man with a gun, they fall to the floor, he hits his head on the stone wall surrounding a fireplace and lies motionless. A dead man is thrown out of a helicopter and his body crashes onto a ledge. A man falls out of a helicopter. A young man is shot as he tries to snowboard out of a cave and a man is shot in the hand. A group of people ride down from a mountain top in a lift, it is stopped and begins to go back up, the people in the lift open the door and jump to the ground far below while being shot at (one young woman's snowboard is hit and breaks in half and throws her to the ground). Two people snowboard down a slope on the same board, they slide out of control toward a ledge, and as they scramble to get away from the edge it begins to break out from under them, and the man dangles from a rope and the young woman is held by a young man. A man threatens five people with a gun, holds it to their heads, forces two young women to kiss and a young man to take off his clothes in frigid weather. A man hits another man in the head, he falls over unconscious and we see some blood on his scalp. A man hits a woman in the head and she falls back onto the floor. A man head-butts a man, punches a young man (we see a bloody scratch on his cheek) and shoves another young man to the ground. Two young men are chased along snow-covered walkways and ledges by two snarling, barking dogs; the young men dangle from ropes, swing from electrical cables and slide down a snowy slope on discs (they look like garbage can lids). A man throws a rope into a helicopter's prop causing it to spin out of control, crash into the side of a mountain and plunge to the ground bursting into flames (there are people onboard). Six people make their way down a snow-covered cliff to a ledge -- the ropes that two people hang from are shot and they fall to the ledge. A young woman and a man try to outrun an avalanche and duck behind a stone ridge as they are about to be overcome. A man hangs another man by the feet over the edge of a tall building and threatens to drop him. A young woman singing on stage jumps into the crowd and lands hard on the floor. There are many scenes that show extreme snowboarding, biking, kayaking, and sky diving stunts and although they look very dangerous no one suffers injuries: Two kayaks float down very rapid water and over a steep waterfall, one kayak is caught in a safety net and the other dangles from the bottom of the net and then falls with two men still inside. A young man and a young woman snowboard from the back of a moving train, jumping over bushes, cars and other obstacles while a cameraman dangles from underneath the train. A young man skateboards on top of a moving train, a rigged rope yanks his board out from under him and sends the board crashing through a billboard. Four people skateboard on top of a moving train and their boards are pulled by rigged ropes through a billboard. A young man and a young woman snowboard off a roof and onto a bar knocking over glasses as they scoot along; the second time, the end up sailing along the bar and crashing through a glass window leading to a hotel lobby. Five people snowboard and ski down an enormous slope (some do flips and twirls over ridges) and one woman falls over a ridge and lands hard on her back. A young man and a young woman snowboard and ski down a large slope in the dark. People ride cross-country bikes over cliffs and rough terrain taking jumps from one ledge to another, people flip and twirl in the air while sky diving. A man dangles from a tree where his parachute is caught. A man is strapped into a harness that hangs from the bottom of a helicopter in several scenes (a woman joins him in one scene). A man shoots into a snow-covered peak to start an avalanche, the snow begins rolling down the mountain, a helicopter is almost swallowed by the tumbling snow and a young man gets hit by the "back spray" (some snow sprays up on him). A TV news report talks about a plane having crashed -- there were no survivors. A man talks about "blowing up the court in Holland." A young woman punches a young man in the stomach, a woman slaps a man in the face. A young woman touches a fireplace shield and it burns her hand (we hear a sizzle). A man walks into a beam and hits his head hard. A fireplace flares up as some young men try to light it. A man walks along railings and beams, steps on a makeshift table that flips up and he falls hard onto the floor. A man yells at another man. A young man urinates in the snow (we hear the trickle and see his message).

SUBSTANCE USE - People are shown drinking alcohol to the point of inebriation.

MESSAGE - Trust yourself and you can do what you need to do even under extreme circumstances. 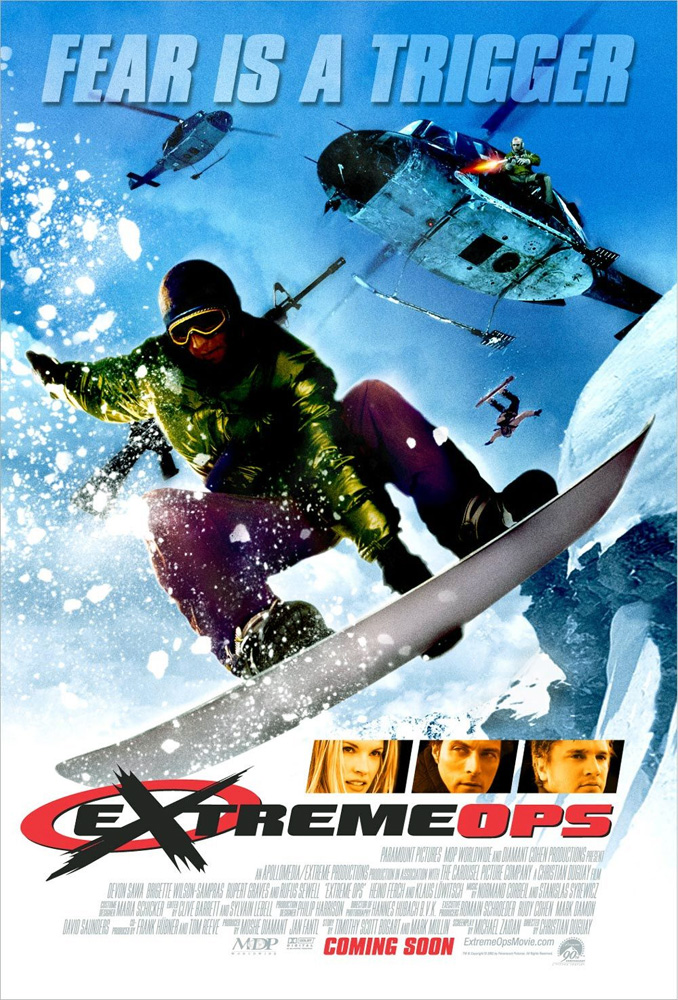