SEX/NUDITY 5 - We see the possessed 12-year-old girl violently and repeatedly stick a cross into her crotch in a masturbatory fashion (we do not see the actual penetration but do see a lot of blood afterwards). She then pushes a woman's face down to her crotch. Some sexual innuendo and several instances of very explicit, obscene and often religiously profane sexual invitations and other utterances spoken by the possessed 12-year-old girl. A religious statue has what look like bloody horns sticking out of the chest and crotch areas. Some cleavage, and during a medical examination the top of a girl's bare breasts are visible.

VIOLENCE/GORE 7 - There are many very intense and scary scenes: the possessed 12-year-old girl's face becomes increasingly pale and streaked with bloody lacerations, and her eyes begin to redden and sometimes roll back (in a later scene we realize that her whole body has been affected); her voice becomes very low and scratchy, she develops a large lump in her throat and makes eerie sounds. During one scene she goes down a flight of stairs backwards -- she looks like a giant spider. During other scenes she is violently thrown back and forth on her bed; she levitates; her head spins all the way around; she spits yellow phlegm at a man; blood comes out of her mouth; she vomits green goo, projecting it on several bystanders and covering their faces; she urinates in public (we see urine trickle to the floor); and, the words "Help Me" appear on her body (presumably from the real person trapped within). A bloody gash appears on her leg when she's sprinkled with holy water. Strange noises and demonic-looking or monstrous faces are evident in a few scenes, and household furnishings become animated: candles flare up, pictures fall off walls, a bed starts to shake vigorously, a room shakes and walls and doors crack and split, the temperature drops suddenly, and stuff flies around by itself -- in one scene furniture flies toward a woman. The possessed 12-year-old girl attacks several people: she hits or slaps several, grabs a man by the crotch and pushes him down; a man grabs her, throws her down, punches her several times and tries to choke her. A man commits suicide by jumping out of a window and tumbling down several steps. A person gets an injection, blood is drawn for testing and a catheter is inserted on a person's neck (some blood is evident). Several dogs are shown fighting each other. Two men get into a scuffle and have to be separated. We are told that a man died when he was pushed down some steps and that his head was turned backwards. We see a dead body, and a pool blood next to a body.

LANGUAGE 7 - 13 F-words and F-word derivatives, several of which are used as raw sexual invitations and are uttered by the possessed 12-year-old girl. A few scatological and anatomical terms, several religious exclamations and many very explicit religious profanities.

DISCUSSION TOPICS - Possession by demons and exorcisms, supernatural beings, mysticism vs. rationalism and science, the limits of psychiatry, Catholic dogma, the Middle East and Iraq.

MESSAGE - Supernatural beings exist and they can inhabit people's bodies. There are no medical remedies, and only religious exorcisms can help alleviate such conditions. 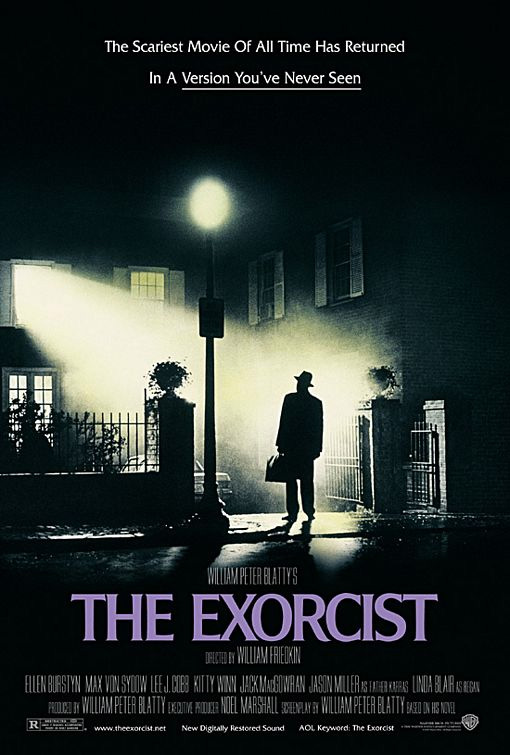