A young woman (Jennifer Carpenter) becomes convinced that demons are possessing her and when medical intervention appears not to work, she turns to her family priest (Tom Wilkinson) for an exorcism. The story, ostensibly inspired by true events, is of the trial of the priest, after the young woman died during the exorcism. Accused of negligence, his church refuses to allow him to take the stand and relate his version of the story. Also with Laura Linney, Campbell Scott and Colm Feore. Directed by Scott Derrickson. [1:54]

SEX/NUDITY 1 - A young man talks about having slept with his girlfriend to comfort her (no sex is implied). A woman wears a low cut top that reveals cleavage.

VIOLENCE/GORE 7 - Three men chase a young woman into a dark barn, one pushes her head into a trough of water, she resists and screams while horses in the barn are frightened and kick down their stall doors, and then the young woman growls and snarls: many beetles skitter through the barn, a snake falls onto a man, he recoils, a man places a cross on the young woman, we hear sizzling and she screams, and a man tries to hold her but she grabs him around the throat and squeezes; another man is kicked in the head by a rearing horse (he falls to the ground).
► A girl opens a door, hears growling and snarling and sees a young woman eating spiders, and then the young woman begins scratching frantically at the wall and pulling out clumps of her hair, while two men struggle to restrain her, and she speaks with a deep voice and her body goes rigid (we hear her bones cracking); she falls on the floor, slaps one man hard in the face and yells.
► A young woman is tied to a bed and a man sprinkles her with water ("holy water"), she leans toward him (we see her badly bruised face), hits a man in the face (he falls back), cats come into a room and attack another man (he falls to the floor), and the young woman unties herself, jumps out a window and runs to a barn.
► A young woman wakes up alone in her dorm room smelling smoke, walks down a darkened hallway, hears noises, a door slams behind her, and she gets back into bed; something moves on her desk and falls on the floor and something pulls the covers off her -- we see something pressing on her body and throat (just from the impressions on her skin and clothing), and she screams and runs out of her room.
► A young woman lies twisted, contorted and motionless on the floor and a young man touches her and she screams loudly, scaring him.
► A young woman standing at the altar of a church begins to moan, bends backward, her eyes are red and spotted, we hear cracking as she bends herself backward, and she then yells at a young man.
► A young woman in a panic runs along a sidewalk, she sees people walking and their faces become twisted, and she sees a man riding in a cab and his face becomes twisted. A young woman looks at a young man sitting next to her, she sees his eyes bleeding black goo, and she screams and runs in a panic.
► A man wakes in the night, walks through a darkened hallway, and there are loud thunder claps and flashes of lightning; the man sees the windows bleeding and paintings on the walls bleeding, he runs outside in a panic and sees a cloaked figure in the distance.
► A young woman sees an image of a demon in storm clouds, begins hyperventilating and goes into a fit. A young woman has several fits that throw her into contorted postures, she growls and moans and thrashes. A young woman enters a church, screams at two women and the women leave the church looking frightened.
► We see photographs of a dead young woman in several scenes; she has a tortured look on her face, her skin is ashen and she has smears of dried blood and dark bruises on her face.
► A young woman walks through a foggy field following a voice, she sees an image of herself, she sits up and we see bloody holes on the palms of her hands. A man is hit by a car and thrown through the windshield (we hear that he is dead).
► A woman wakes up alone in her apartment, she smells smoke, she walks through the dark apartment, stands in the kitchen, the lights are switched off, a door opens, and she is frozen in fear. A man in a jail cell hears noises and sees a dark shadow moving in the hallway. A man enters a room, and we see deep scratch marks on a wall. A woman awakens in her apartment, hears screaming, and she finds a tape recorder playing and hears the tortured screams of a young woman. We hear screaming and screeching in the distance -- it sounds like a terrified woman.
► We hear news reports that a man murdered two people. People talk about women being burned at the stake. A cat hisses at a woman. A man sees a hive swarming with bees hanging from a house in winter. 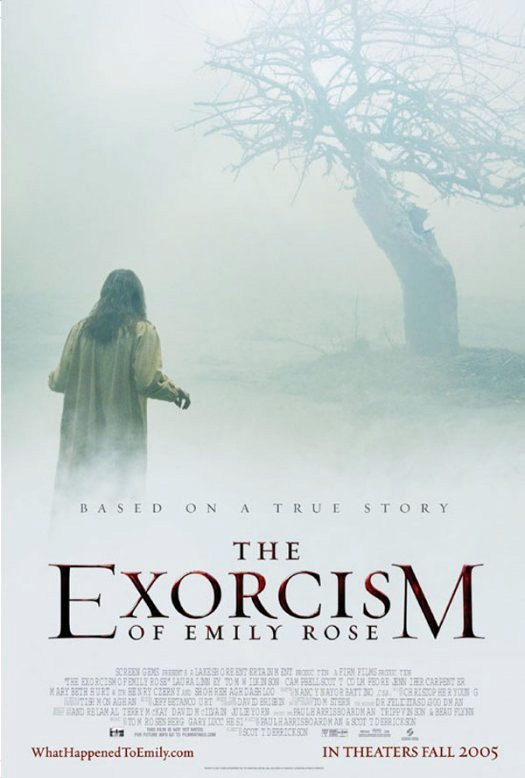