A young man (Scott Mechlowicz) graduates from high school thinking his life is all in order: he plans to go to college and have his long-time girlfriend join him the following year when she graduates. She surprises him when she dumps him on graduation day and feeling lost he decides to travel to Berlin to meet his German pen pal -- since he just realized she's a beautiful young woman. Also with Jacob Pitts, Michelle Trachtenberg, Travis Wester and Jessica Boehrs. Directed by Jeff Schaffer, Alec Berg and David Mandel. [1:32]

SEX/NUDITY 10 - A young man and a young woman have sex in a confessional: we see them kissing and caressing each other, we see her bare breasts and his bare shoulders, we see their bare buttocks pressed against glass and the screen, and we hear them moaning and thrusting (a woman enters the confessional and sees their activities). A young man dreams of a young woman taking off her top (we see bare breasts and bikini panties), inviting him to touch her, they kiss and he caresses her. A young man walks into a sex club and is surrounded by partially dressed women (most are topless revealing bare breasts, and others have sheer lingerie on), they chain him to a bed frame, two men tear off his pants and we see his bare buttocks (please see the Violence/Gore category for more details). A young man and a young woman kiss passionately in an alley, she kisses down his chest and performs oral sex on him (we hear his zipper open) and he reacts with enthusiasm. Two topless women caress each other's bare breasts. A young man and a young woman (who happen to be twins) kiss passionately and caress each other. A young woman in lingerie (we see cleavage and bare shoulders) talks to a man about "giving herself" to someone, the man picks her up, puts her on a desk and they kiss. A young man and a young woman kiss passionately on a table. A young man and a young woman kiss and fall onto a bed. A young man and a young woman kiss, and a man kisses a young man on the mouth. A man and a young woman kiss, she dances while he sings on-stage, and she thrusts her buttocks at his crotch. A young man wakes up from a dream and a man is kissing and licking his cheek. A young woman goes to the bathroom on an airplane, a young man follows her, we see her reach out and grab him and pull him into the bathroom with her and it is suggested that they have sex. A man kisses a young woman's hand. On a train, a man puts his hand on a young man's knee, he gives the young man a shoulder massage, and when they pass through a long tunnel, the man is wearing no pants (we see his bikini underwear and part of his bare buttocks when he bends over to pick up his pants) and smoking a cigarette (all of his advances are received with disinterest). A man makes sexual advances toward a young woman, he admits he is married and says he also sleeps with other men. Three young men read about a nude beach, they drop their swim trunks as they approach the beach (we see a large number of completely nude men from the front and back on the beach); the nude men chase (acting like zombies) a young woman who appears at the beach, and she runs and screams. A large group of young women sunbathes on a nude beach (we see many bare breasts). Scantily-clad women dance in a night club, one young woman wears a top that is cut to her waist and reveals cleavage. A young man admires a young woman's buttocks. We see an animated drawing of a man grabbing a woman's buttocks (she is wearing a bikini) and a man grabbing a man's buttocks. We see an animated drawing of a man climbing into an overhead storage compartment with a woman. We see an animated drawing of a person unzipping and opening their pants. A song is repeated throughout the movie, about a young man not knowing that his girlfriend is being unfaithful -- it includes some detail about where their tryst would take place and suggestions of her performing oral sex. A young woman sits in a bathtub covered to the shoulders with bubbles, and a young man lies on a table getting a massage with a towel over his buttocks (we see his bare back). Three young women in bikinis sit in a hot tub, two leave and a young man joins the other, he convinces her to remove her top (we see her bare breasts) and she touches her breasts while he watches (he tells her that there is something on her that she should clean off). A young woman wears a low-cut dress that reveals cleavage, bare shoulders and back. Sexually suggestive remarks and images include: A young man says, "this guy wants to have sex with me," a young man describes the potential dangers of planning a meeting with someone who could be a sexual predator, a young man thinks that his friend is homosexual, a young man talks about "prudish American" sex vs. "hot, steamy European" sex, we see many signs and images representing Amsterdam's attitude toward sexual freedom (i.e. neon lights of people having sex, posters advertising sex clubs, etc.), a man says, "I sexually assaulted a horse in Berlin," and a young man confesses that he watched a "gay porno movie."

VIOLENCE/GORE 6 - A young man is chained to a bed frame, two large men with implements of torture enter the room, they attach what look like battery cables to his genitals (that's what we are told), they charge them, and the young man screams; then the young man is bent over, a man comes toward his buttocks with a mechanized device that has three probes, the young man screams again and we see him walking gingerly later. A dog holds a severed human hand in its mouth. An angry mob chases a man along a street threatening to beat him up (some carry sticks, and one has brass knuckles). A man says, "I stabbed a woman in Berlin." A man puts a cigarette out on his arm. A man yells at and threatens two young men, and a man throws a bottle on the floor threateningly. A young man is robbed at knife point. A young man jumps from a balcony and slides down a banner. A man and a young man (both acting as mimes) fight in slow motion with no blows really connecting until one is kicked in the groin. A man opens two beer bottles with his eye sockets. A young man breaks a bottle on a man's head (he is not hurt), a man breaks a bottle on his own head (he is not hurt), and a young man hits himself in the head with a bottle (it doesn't break and he grimaces). A video shows a man kicking another man in the groin. A hat catches on fire filling a room with smoke. A boy paints a mustache on his lip (to look like Hitler), and does the goose-step back and forth across a room. A young man holds a man in a headlock. A young man in his jockey underwear is duct taped to a tree. We see an animated drawing of many people vomiting repeatedly and copiously. A little girl lifts her skirt and urinates on the ground (we see the stream) and a young man urinates on the bathroom floor (we hear the splatter).

SUBSTANCE USE - Many people drink alcohol, many to the point of drunkenness. People are shown smoking cigarettes. People eat what they think are hash brownies and react badly to the effects.

MESSAGE - The unpredictability of life is what makes it exciting. 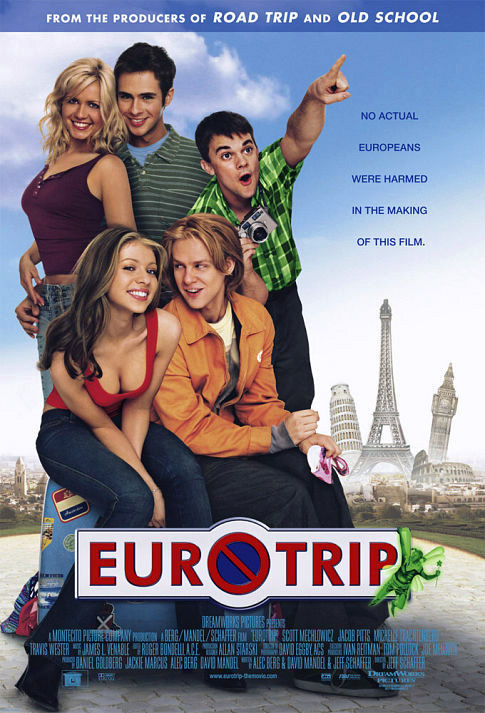