A young boy (Henry Thomas) discovers an extraterrestrial being who's been left behind when his spacecraft had to ascend in a hurry. The two become great friends while government agents are trying to catch E.T. But the boy's older brother (Robert MacNaughton), younger sister (Drew Barrymore) and friends come to E.T.'s rescue. Also with Dee Wallace-Stone, Peter Coyote and C. Thomas Howell. [1:55]

SEX/NUDITY 1 - A boy kisses a girl (it looks like it's on the mouth) and a man kisses a woman in a movie playing on TV. A boy reaches out to touch a woman's buttocks (she is bent over a dishwasher and wearing a bathrobe). A boy and E.T. are seen sharing a bath.

VIOLENCE/GORE 4 - E.T. is chased through woods by men with flashlights and he runs through the trees screaming. Men walk through a house with equipment and flashlights. Boys grab kitchen knives when they go to investigate noises in a shed. A bicycle flies off the edge of a cliff and over trees, and when it lands, the riders are thrown onto the ground. There are many jump scenes, especially before we meet E.T.: a boy goes toward a shed from where he hears noises and rustling, and when he throws his ball into the shed something throws it back out at him; a boy walks through high grass and comes upon E.T. (they both see each other at the same time and both scream and panic); E.T. runs from a boy screaming and knocking things over. E.T. screams frequently: when a dog comes into a room, when a young girl comes into a room and screams at him, when an umbrella pops open, and he falls down after a flashbulb goes off. There are tense moments when a woman nearly discovers E.T., E.T. walks toward a boy sitting on a chair, and the boy is very nervous. A boy cuts his finger on a saw blade and blood drips on his finger and the blade. We see several scenes where E.T. is presumably dying and looks sickly and ashen; when he stops breathing, a medical team uses CPR and a defibrillator to start his heart. A man closes E.T.'s eyes when it seems he's dead. A boy drives an ambulance very fast; a large plastic tube containing two men in environmental suits is pulled by the ambulance until a boy detaches it and the two men roll down a street (they seem uninjured). Boys ride their bicycles very fast and recklessly trying to get away from several men who are chasing them. They eventually fly off. In the 1982 version we see men with pistols and shotguns trying to stop the boys and E.T. from escaping; in the 2002 version the guns have been digitally replaced with walkie-talkies. E.T. is hit in the face by a refrigerator door, he falls on the floor, and a boy backs into hanging bookshelves and knocks them off the wall. People are dressed for Halloween: one has a fake knife through his head, some are dressed like zombies, most with fake blood dripping from some body part, and a boy talks about E.T. being given a lobotomy. A scared boy tries to call out for help but his voice won't come out. E.T. walks into cabinets and falls on the floor after drinking many cans of beer. A boy burps loudly. There are many instances where both terrestrial and extraterrestrial creatures drop and spill stuff: a boy drops an armful of food and milk pours onto the floor, a woman spills coffee, E.T. throws a potato salad container and empty beer cans to the floor, and a boy overturns jars containing frogs (in order to save them from dissection) and causes a commotion in the biology lab. E.T. looks like a fossilized turtle, and E.T.s make gurgling, snorting noises as they breathe; we see E.T.'s head and neck pulsing periodically. The music is ominous in several scenes and most of the movie seems to take place at night with lots of mist and fog. People yell at each other in several scenes. E.T.'s finger and heart glow (we can see the outline of his beating heart).

LANGUAGE 3 - 5 scatological terms, 2 anatomical terms, 2 mild obscenities, 3 religious exclamations, and some name-calling and insults. (The 2002 version still contains an anatomical insult, despite many press reports that is was excised.)

SUBSTANCE USE - E.T. is shown drinking many cans of beer and he and a young boy are shown to be intoxicated. A cigarette burns in an ashtray while several boys are the only ones around.

MESSAGE - Children and extraterrestrial beings tend to be kind-hearted and smart, while most adults are close-minded and obtuse -- and are not to be trusted, especially if they're government agents. 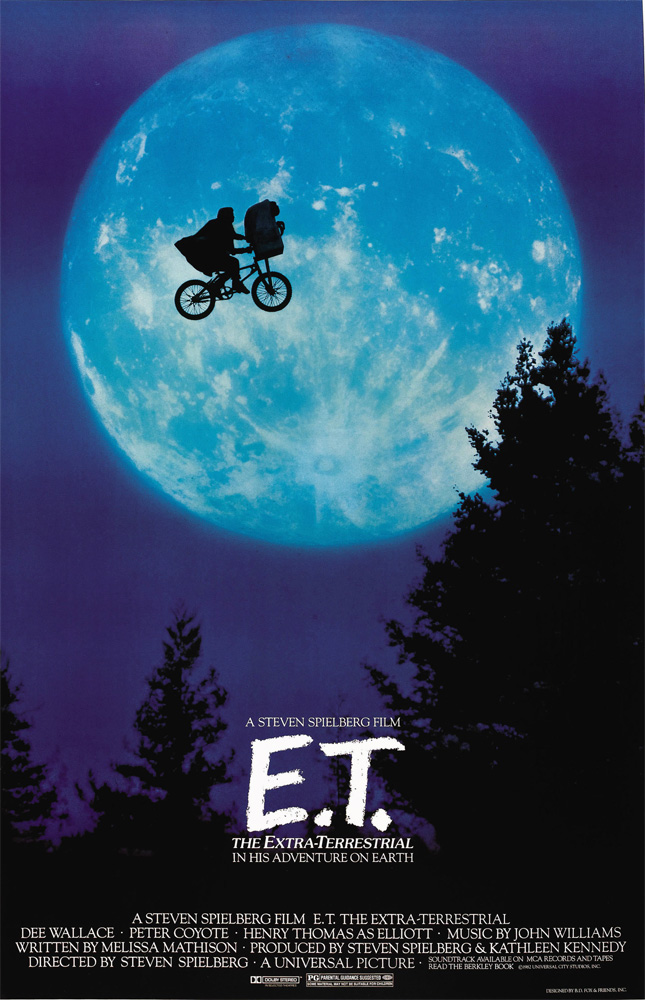