A parody of many recent films, including "The Chronicles of Narnia," "Unfortunate Events," "Snakes on a Plane," "X-Men," "Harry Potter," "Borat," "Superman Returns," etc. The main plot thread concerns four orphans who visit a chocolate factory and are reunited in "Gnarnia," where they are forced to defend themselves against a cruel witch and her minions. With Kal Penn, Adam Campbell, Jennifer Coolidge, Jayma Mays and Faune Chambers. Directed by Jason Friedberg & Aaron Seltzer. [1:26]

SEX/NUDITY 6 - A woman seduces a young man, she pushes him onto a bed, they kiss and it is implied that they have sex.
► A woman grows larger breasts, larger buttocks, a unibrow and excess underarm skin at her lover's request, prior to them having sex (which is implied).
► A woman sucks on a young man's thumb (we hear squeaking) and we see that the appendage is quite swollen when she releases him.
► Two young women, a young man and an older man lie in bed together and it is implied that they have all had sex together.
► A faun and a beaver kiss in a few scenes and in one the faun pushes his tongue into the beaver's mouth.
► A young woman lies on top of a man in bed, she gets up and leaves when they are interrupted by others entering the room and he makes a comment about his just having taken Cialis.
► A woman wears skimpy patches that cover her breasts and genitals and the rest of her body is covered with blue paint (her blue-coated cleavage, abdomen and legs are visible in several scenes); she dances and moves suggestively while a young man looks on with interest.
► A young woman moves down, off screen, and it is implied that she is performing oral sex on a faun; however, we find out that she is actually polishing his hooves.
► Several women wearing skimpy bikinis dance, move suggestively and sing suggestive lyrics while carrying and eating bananas, hot dogs, etc.; two of the women kiss. A man wears a thong swimsuit that reveals his bare buttocks. A woman wearing a bikini steps out of a wardrobe. We see a woman's pregnant abdomen in a few scenes. A man wearing bikini underwear lies on a floor (his bare chest and legs are visible). A young man pulls off his shirt and stands bare-chested. A heavyset man runs bare-chested and his breasts bounce (we hear squishing with each bounce). A man's buttock cleavage is shown when his pants drop low in the back.
► A woman opens her dress in the direction of a young man, and we see her bare shoulders and his facial expression.
► A woman is bitten on her clothed nipples by two snakes and a man is bitten on his clothed crotch. A man caresses a young woman's clothed breast.
► There are a few references to humans having sex with animals and having offspring with traits from both (e.g. half goat, half lion, etc.).
► A woman jogging slows to slow motion while a young man watches with interest.
► A young woman polishes a doorknob and says that a man wanted her to.

SUBSTANCE USE - Two young women and a young man chug beer at a party; one young woman appears tipsy and the other projectile vomits on people standing by (we see the goo splatter on them). A man drinks from a bottle of alcohol in a few scenes, a young woman is asked by an air steward if she'd like a cocktail (she does not take one), a woman offers a young man alcohol (he does not drink any), a bottle of champagne is opened but we do not see anyone drink from it, and we see a refrigerator filled with champagne bottles. A character appears to be inebriated throughout the film. A woman who is pregnant is shown smoking and a young woman and man smoke cigarettes after they apparently have had sex.

MESSAGE - Most movies are easy to spoof; perhaps too easy.

(Note: The images of four young people are added to a painting of the "Last Supper.") 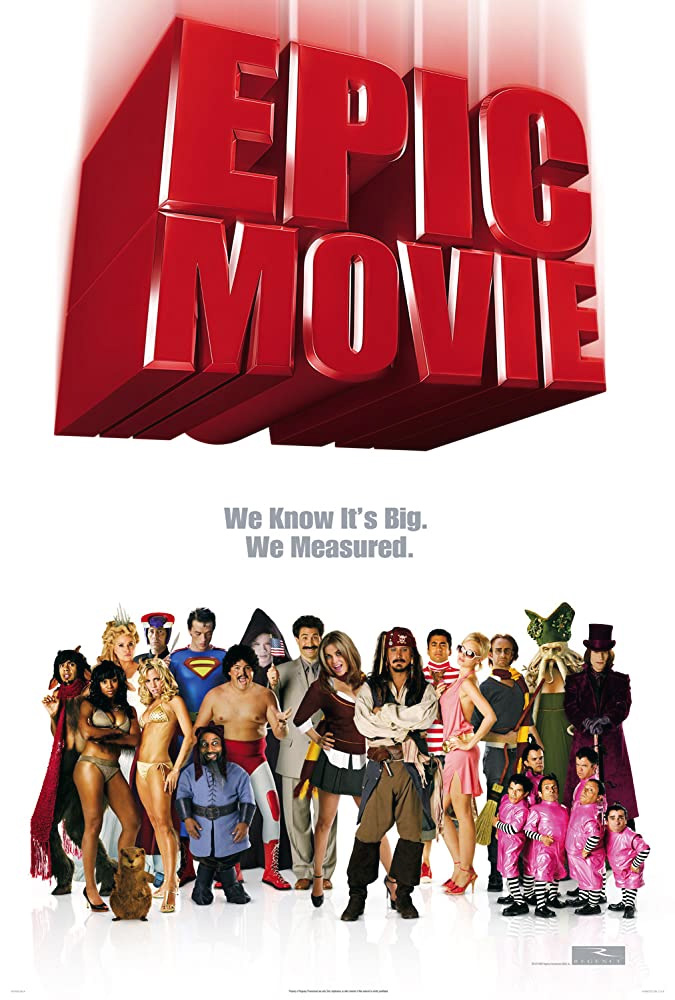