A woman (Jennifer Lopez) meets a man (Billy Campbell) while she waits tables in a diner and she thinks that he is the man who can make her feel safe. So it appears that she has found the happiness that has long eluded her -- until she discovers her new husband can be very abusive. His obsession to keep his wife makes her determined to do whatever it takes to free herself. Also with Juliette Lewis, Christopher Maher, Fred Ward, Noah Wyle, Tessa Allen and Dan Futterman. [1:55]

SEX/NUDITY 4 - Men and women kiss romantically in several scenes. A man climbs in bed with a woman (her young daughter is sleeping in the same bed) and the man and woman hold hands, kiss and hold each other. A man showers behind a fogged glass door and we see his silhouette; a woman drops her robe and asks if she can join him (we see her bare back). A man and woman sleep in bed together; the man is bare-chested, we see the woman's bare shoulders and thigh and she rolls over to hold the man. A man kisses a woman on the forehead. Women wear outfits (tight tops, short skirts, tank tops, shorts, a swimsuit, hip-huggers) that reveal bare thighs, cleavage, bare shoulders, bare abdomens and backs. A painting of a nude woman hangs on a wall. A man tells a woman that another man has bet that he can "get in her pants," a man tells a woman "men and women have different needs," a woman invites a man to have sex with her, a man says "I haven't had sex since 1995," a man talks about being really bad in bed, a woman says to a man "...I've had you and you're not that bad," a man asks a woman if she is going to give him babies, and a woman asks a man if he's flirting with her. Men and woman dance close together.

VIOLENCE/GORE 6 - There's a prolonged fight: A man is attacked and punched in the face repeatedly, and he falls into a lamp breaking it and cutting his hand (we see lots of blood on his hand). He lunges and falls on the floor, and he's hit on the head with an object (we see lots of thick blood on his face). He's also kicked in the face, then holds his assailant by the throat against a wall and also hits him on the head with a lamp, but he is poked in the eyes and his head is slammed into a desk. The man is kicked repeatedly until he falls through a railing and crashes onto a glass top table below. A man grabs a woman around the throat, slams her against a wall, shoves her to the floor trying to strangle her (she struggles and fights) while a little girl grabs the man's hair and face trying to make him stop; the man shoves the girl, she falls on the floor and hits her head, and the woman sprays the man's eyes with mace. A man bursts out of a closet, grabs a woman by the hair, throws her to the floor and kicks her repeatedly (we see a bruise on her abdomen later). A man slaps a woman across the face and then punches her in the face and she falls to the ground (we see a bloody scratch on her cheek). A man grabs another man by the shirt and shoves him while threatening him verbally. A man threatens several people with a gun, and a man holds a knife to a man's throat. A man pounds on and breaks down a door, the woman inside the room runs while holding a child and the man chases her. A woman drives recklessly while being chased by a man in another car; the woman's car is rammed from behind several times (a little girl is in the back seat of the car and is terrified), she drives through a gate and across a bridge and the other car crashes into a metal beam across the bridge leaving the driver with a bloody gash on his forehead. A woman has a nightmare that a man is in her house and wakes up with a start. A woman imagines that there is someone in the shower stall and jerks the curtains open. Three men barge into a man's house and search it, tossing things around and breaking things. A woman and man practice self-defense techniques and we see punching and kicking. A woman urinates in a toilet; we hear the trickle. There is a constant sense of threat and impending danger.

MESSAGE - Happiness doesn't last. We have the right to protect our lives and the lives of our children. 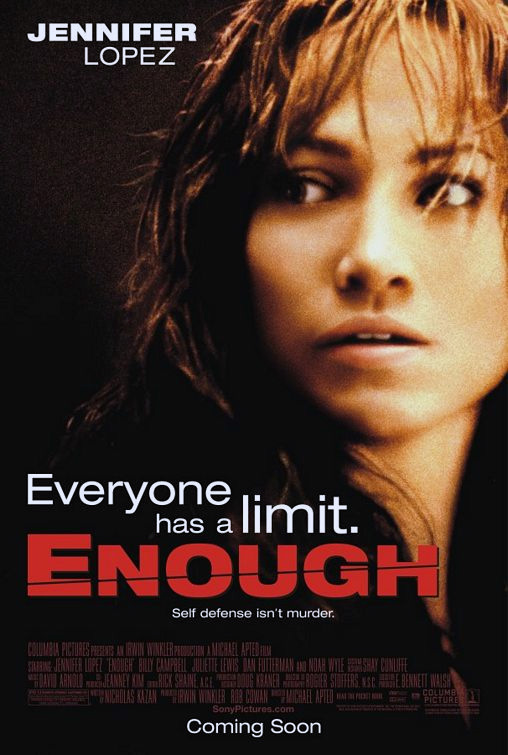