SEX/NUDITY 2 - An American man meets a Japanese woman in a US college and he travels to Japan to visit her; they hold hands several times and in one scene he holds her hand, kisses it, and the couple maintains a prolonged kiss until the camera cuts to an office scene (sex is implied).
► Outside a gymnasium at night where a college dance is occurring, a man and a woman embrace and kiss as another man and a woman walk by.
► In a Japanese town after bombings, an open-sided hut is used as a brothel: women there are clothed in dresses that reveal only their lower arms, hands and throats as one woman begins to unbutton one button of a man's shirt and the camera pans away.

VIOLENCE/GORE 5 - An extended scene is tinted red while showing Japanese soldiers shooting other Japanese soldiers and slashing some necks with swords, although we do not see blood.
► We hear that several Japanese generals committed suicide; we see one frosted glass office door with the silhouette of a man shooting himself in the head and the glass is splattered with blood. US soldiers disperse to arrest war criminals; we hear a shot fired off-screen and soldiers enter an office to find a Japanese man collapsed on his desk, with a gun in his hand and a pool of blood under his face.
► Silent black and white footage shows American WWII planes on the ground and in the air, with a close-up of a bomb attached to one plane and in one scene, an atomic bomb dropped onto a town creates a large mushroom cloud; we later see massive piles of debris, black-charred remains and the smoldering rubble of some buildings along with people smeared with black char living in cardboard and plywood shacks or on blackened floors in burned out high-rises. A night scene shows a city burning in the distance in tall flames.
► An injured man is taken to a prison hospital and we see him in a wheelchair where a soldier tells another soldier that the man is being kept alive until information is obtained from him and then he will be hanged; we later hear that he was hanged and that two other Japanese war criminals died in prison.
► An American soldier argues loudly with the men assigned to him (his Japanese interpreter, Japanese civilians, Japanese government officials and Japanese soldiers; please see the Substance Use category for more details) and he turns over a table laden with beer bottles onto three Japanese men that said he "stinks"; we hear breaking glass as the Japanese men punch the American, knock him down and kick him (we see him later with a bleeding face around one eye, his mouth and his chin, and his face remains bruised for a few days). In a flashback, an American is in Japan before the war and three Japanese teen boys throw rocks at him, cutting his forehead and we see some blood. Several Japanese break down doors to their own government offices, looking for a surrender recording made by the Emperor, but fail to find it.
► Several US soldiers march toward the Emperor's Palace, but stop as one man removes his sidearm before going inside where the Japanese guards carry swords, but leave them sheathed. A few scenes feature Japanese soldiers marching or standing at attention with bayonets attached to their rifles. Throughout the film are several scenes of American soldiers working in a large office building, driving jeeps, and occasionally carrying rifles and handguns as they occupy Japan.
► As a general approaches Japan by plane, we hear that Japanese snipers will be no threat and the general tells his men to remove their firearms before disembarking from the plane. A Japanese official tells an American general about the atomic bombings, "You turned our children into shadows on the walls." A US general says to an assistant, "We must hang Prime Minister Tojo." A general tells a man that he will hang and the man says nothing. A general tells a Japanese official, "Tell Kido that when he sees his Emperor hanging from a rope, it is he who did it!" We hear several times that many Japanese citizens not wanting to surrender to the US committed suicide. We hear that out of 30 potential Japanese war criminals rounded up initially, four committed suicide. We hear that the Emperor asked over the radio that Japanese citizens refrain from committing suicide as the Americans arrived to occupy Japan. An American general walks around a Japanese town that was bombed a few weeks earlier and remarks to himself that the smell of rotting human flesh is still evident. We hear that a woman returned home to Japan because her father became ill and later died in her care. One general says to another general that killing the Japanese emperor would only lead to a lot of bloodshed that would prevent reconstruction efforts. We hear that a US general was demoted to colonel for directing bombing missions away from Japanese cities where a former girlfriend lived. An older Japanese man tells a US soldier that he commanded troops in bloody battles in WWII, but that he and the other Japanese officers lost their humanity in doing so. A Japanese man gives an American letters from his niece, who died in a bombing. We hear that a Japanese man lost his family in a bombing and that he never coped, but only died inwardly himself. We see a family altar to the dead that contains pictures of a man's wife, both sons and a niece. Two men look at a demolished apartment building at night and they look at the debris, torn books, photos and broken possessions lying in heaps and one of the men cries as the other man says he can get a list of the dead from the bombing.
► At a dock of a Japanese port, US military load rifles and tools into a ship; a depth charge explodes in the water in a medium sized splash and men whoop and cheer.

SUBSTANCE USE - A crude tavern in a hut in Japan serves Sake to men that drink it from small cups, a man at a bar drinks beer from a bottle, three men drink beer form bottles while empty Sake cups sit on their table (please see the Violence/Gore category for more details), in a Japanese home at dinner men are shown drinking Sake as the women pour it, US generals drink wine and brandy and whiskey at a dinner, a man drinks whiskey as he works late at night and another man has a half full glass of whiskey on his desk, and an American man and a Japanese man agree to have a drink together and drive away in a jeep. Dozens of Japanese soldiers and US military men smoke cigarettes in numerous scenes, several women smoke cigarettes in an open-sided hut, men walk out of a college dance in the USA smoke cigarettes outside the building, a man smokes a cigarette at his office desk and clicks a cigarette lighter open and closed several times and a man holds an unlit corncob pipe in his mouth.

MESSAGE - General Douglas McArthur kept Japanese culture intact after WWII by preserving the Emperor Hirohito on his throne, despite encouragement to hang Emperor. 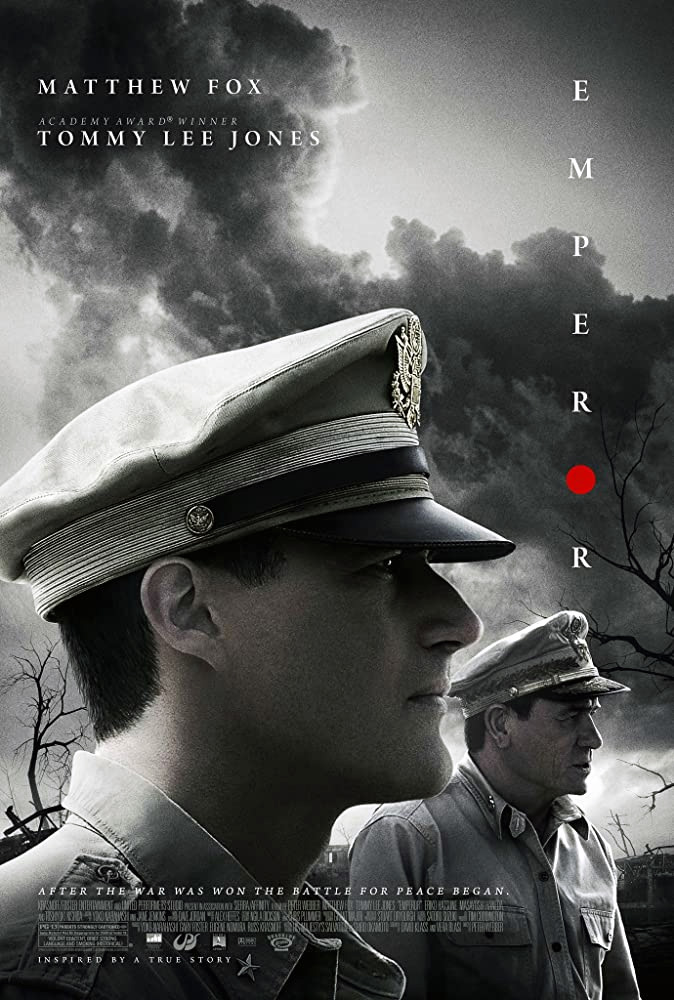