A 10-year-old boy and his father come upon an orphaned cheetah cub and take it to their South African farm hoping to raise it until it is strong enough to survive in the wild. When the boy's father falls ill and the cheetah shows up at his school scaring his classmates, he vows to deliver his friend to the wild, as promised. With Hope Davis, Campbell Scott, Alex Michaeletos, Emonn Walker and Nthabiseng Kenoshi. Directed by Carroll Ballard. [1:40]

SEX/NUDITY 1 - A husband and wife kiss tenderly, and a husband and his wife kiss and hug in a few scenes.
► A girl winks at a boy, and a bird says "Feisty mama" and "your place or mine."

VIOLENCE/GORE 4 - A swarm of tsetse flies cover a man and a boy; the man is stung all over, he becomes very ill, his face and hands become very swollen and his breathing is labored.
► A baboon barks a warning sound, animals become agitated, a lion chases a cheetah, and the cheetah is tackled by another lion and killed (we hear the thud, a roar and a cloud of dust coming up from tall grass).
► Two cheetahs stalk and chase an animal, we see them trip it and eat it (there isn't a lot of detail). A dead animal lies on the ground with a bloody opening in its abdomen, a cheetah snarls and tears at the flesh (we see the tissue being pulled), and the cheetah snarls and hisses at a boy that approaches it.
► A man goes into a dark cave, we hear him scream and hear loud rumbling; we then see him buried under dirt that has collapsed and covered him, and a boy begins to dig him out, but then leaves him.
► A boy is chased by a wild boar: the boy falls on the ground, he rolls over to see the boar's tusks and he faints (he wakes up later, uninjured).
► A boy leaves a sick man to go for help, he is followed by lions, but a cheetah gets their attention and they follow it. Lions approach a man and a boy.
► A boy and a cheetah ride on a raft through crocodile infested waters, they approach rapids, they are thrown off the raft, and crocodiles circle underneath the boy, who thrusts a spear into the water (he does not hit anything) but they get out of the water just as a crocodile approaches them.
► A boy hides in a tree from an animal that's snarling and snorting below him, and a large spider crawls down the boy's face but he tries to remain quiet. People scream and run when a snake slithers along the floor near them.
► A boy is surrounded by bullies who shove him, then push him to the floor of a bathroom and try to steal his money; a cheetah comes out of a stall and snarls at them, the bullies run away. We hear screaming and people running when a cheetah comes into a school.
► A herd of buffalo stampedes toward a boy and cheetah, the boy hides in tall grass and is unharmed but the cheetah runs in the opposite direction. A boy walks alone through thick woods, we see lions prowling, hyenas circling and elephants marching nearby. A cheetah runs across a street, cars swerve and honk, and a boy chases it.
► A cheetah chases an ostrich until it finds its nest of three eggs (the cheetah looks at and sniffs them). A cheetah chases a gazelle but does not pounce on it. A cheetah is trapped in a cage. A cheetah cub walks across a road and is nearly hit by a car.
► An unconscious man is treated by a tribal doctor who chants over him and places leaves and plaster on his face. A man finds a dagger and says, "This will kill anything." A man appears threatening when he approaches the camp of a boy and cheetah and the man has a wound on his arm (we see a blood tinged cloth). A man and a boy find ruins strewn with many human skeletons and skulls.
► A man tells a boy that they will have to eat one of their animals to survive. A boy and a cheetah are stranded in an isolated area when their motorcycle runs out of gas, and they wander until they find a crashed airplane, which they use as shelter.
► A cheetah cub is left orphaned after its mother is killed by lions. A boy wakes up to the flashing lights of an ambulance that has come to retrieve his father, who died. A man collapses in a field, we hear that he is recovering in a hospital and we see him later with a surgical scar on his head.
► A man tells a story about how the cheetah got the black lines on its face and tells of a mother cheetah losing its cub and crying so much that her face became stained.
► A boy pretends to break his own neck (we hear a crack and he falls limp) and a man who's with him becomes concerned. A boy plays with and sleeps with a full-grown cheetah in several scenes. A cheetah panics and jumps when it chews on a TV remote turning on the TV and changing the channels. A boy holds a snake up to a cheetah cub's nose (they just look at each other).
► A bush baby always looks frightened (it has very large eyes and it chirps) and jumps around. We see a boy missing his leg from the knee down.

MESSAGE - Wild animals should be left to the wild. Money motivates people to do bad things. 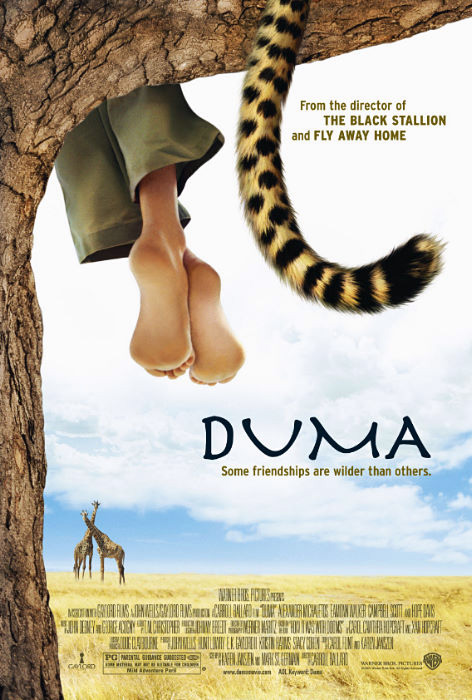