A publishing executive (Daniel Craig) quits his New York City job to move with his wife (Rachel Weisz) and young daughters to a pastoral New England town. They soon learn that their great new home was the scene of the gruesome murder of a mother and her two children, and the townspeople believe the husband did it and survived. As they try to work out the details of the crime, they realize that there are even more disturbing consequences. Also with Naomi Watts, Marton Csokas, Claire Geare, Taylor Geare and Rachel G. Fox. Directed by Jim Sheridan. [1:35]

SEX/NUDITY 2 - A husband and his wife laugh and wrestle in bed and sex is implied as the scene fades to black. A husband and his wife kiss briefly several times.
► Several scenes picture a husband and his wife in bed under covers; she wears a slip that comes to the knee and bares some cleavage. A man gets out of bed in several scenes and we see his bare chest. A man bathes and we see his bare chest and knees among many bubbles. Two women wear tight tank tops under long-sleeved shirts, revealing cleavage in two scenes. Several teen girls wear short skirts halfway up the thigh over black tights. A man wearing only boxer shorts walks into a room and we see peeling red skin on his bare back and chest.
► A man tells another man that his wife has a young boyfriend (sex is implied) and needs to be killed (please see the Violence/Gore category for more details).

VIOLENCE/GORE 6 - We see a man break into a house and shoot two girls and a woman (we see some blood and holes in the bodies, including a hole in the back of one girl's head and the front of the woman's head); a man comes home, attacks the gunman, falls, the gun is dropped, the woman picks it up, aims at the gunman and fires, hitting one of the men. A man shoots another man twice in the stomach; we see no blood, but hear pained grunts.
► A husband runs to a room where his wife had screamed, they see that their two young daughters are ill, they each pick up a child, who gasps and dies; they look under their heavy nightgowns and find gunshot wounds and bright red blood stains, one child has a red hole in the back of her head, and the wife slaps the husband in the face and arms and yells, "They're dead!"
► A man pours gasoline on the floor and on a man, flames burn up to the man and there's an explosion -- we see a large fireball in the basement and another coming out the front door of a burning house.
► A man is beaten and chloroformed along with a woman, and they are dragged to a basement where two men tie the woman up in a corner; one of the men pours gasoline and lights it as the chloroformed man comes to and hits him several times with a wooden club (he falls unconscious).
► The ghost of a woman walks through a burning house, trying to tell a man that he is in danger. A three-year-old girl sees a dark male figure at her window, her 5-year-old sister says she saw it also and when a broken awning slams into the window the girls scream. A woman and two young girls see a dark male figure in several scenes.
► A man runs off a male intruder that tries to run him down with a car in his front yard; the man argues with the police that try to calm him. A man runs from his house and chases another man he sees in his back yard at night; he falls on an icy hill and returns home, unhurt.
► Goth teens with multiple facial piercings and black eye makeup have a séance in the root cellar of an old house and the owner chases them off after they tell him a killer lives there. A man finds a tableau of two baby dolls, naked and appearing bloody on the head and chests and a full-sized female doll appearing bloody on the face as well.
► A psychiatric patient throws furniture violently until he is led away by two guards. A man goes into his abandoned house at night, crouches on the kitchen floor and screams. A prison warden plays a tape for a male visitor of a violent prisoner that is mentally ill.
► A man calls another man and tells him to kill his wife. A man with a gun threatens another man. A man wearing only boxer shorts walks into a room and we see peeling red skin on his bare back and chest, arms and shoulders, abdomen and legs; another man in the room asks why he has his family's photo and tells him to stay away from his family or he will kill him. A woman and her teen daughter tell a man released from a psychiatric hospital with amnesia that he did not kill his wife and two daughters, but that it was someone else. A man tells a woman that a killer shot a little girl in the back. A woman implies she shot herself when her two daughters died by gunfire ("I went with them"). A woman says that she feels that a woman was shot in a specific bedroom of their home, beside a hole in the wall. A man says twice that he will get a gun and shoot a killer himself. A neighbor tells a man that a family of four was shot in the man's house five years before and only the father survived. A man imagines his young daughters telling him that a neighbor said whoever lives in a house is killed. A man, upset about strange noises in his house and a killer being on the loose, says he will hire a priest, witchdoctor or feng shui expert. A man says to another man that he cannot believe he killed his family, curses, and walks out of the building.
► A divorced man and woman argue in their driveway about raising their 13-year-old daughter; he puts the girl in his car and screeches his tires as he speeds away (the roads are icy). In several scenes, a man shouts at his ex-wife, while she tells him to leave. A man argues with neighbors and with police officers several times about killings that occurred in his house five years ago.
► A psychiatric institute looks dark and dingy with peeling paint and cracked windows and the patients are shown talking to themselves, rocking in their seats or biting their nails. A house is shown completely empty, dark and with broken windows and graffiti on the outside walls of the house reads "Evil."

SUBSTANCE USE - A man pops a champagne cork at an office party and pours it into glasses (no one is seen drinking) and a glass of beer sits untouched on a kitchen table. A person smokes outside a building. 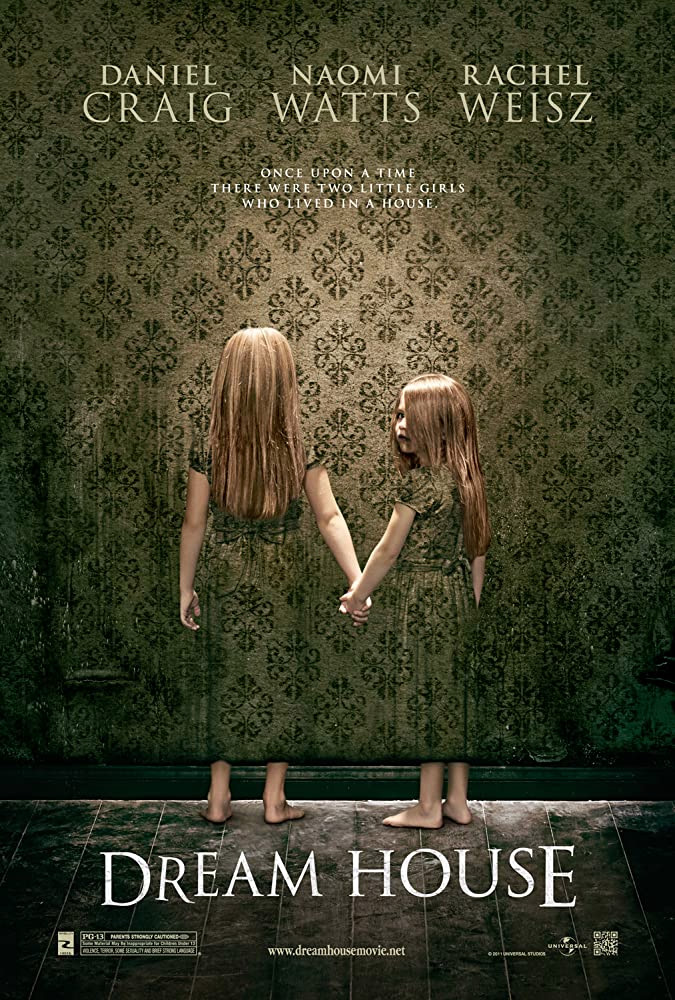