Romantic comedy set in New York City in 1963: Renee Zellweger is a feminist author who violates her own rules of love when she's swept off her feet by unapologetic ladies man and overall cad Ewan McGregor. Also with Sarah Paulson, Rachel Dratch and David Hyde Pierce. Directed by Peyton Reed. [1:34]

SEX/NUDITY 6 - A man and a woman kiss, the man walks funny after the kiss and is apparently aroused because he dumps a bucket of ice water on his head. A man and a woman talk on the telephone and the screen splits: each side of the screen shows them in positions that, when put together, resemble sexual positions. For instance, the woman kneels on her side and her head is positioned at his crotch; then he kneels and his head is positioned at her crotch; then they lie in opposite directions (head to toe); and then his side of the screen is positioned on top of hers, while she's lying on her back and he's doing push-ups. A man and a woman kiss several times while lying clothed in bed. A nude woman (with long hair covering her breasts) joins a man for sex (we see him about to lie on top of her). A man and a woman kiss and nuzzle in many scenes, and a man kisses a woman's hand. A man and a woman dance together in several scenes. A woman invites a man to go to her apartment and have sex (he declines). A man climbs into bed with a woman and tries to kiss her. A woman talks to a group of men about sex, makes a reference to self-induced sexual pleasure and defines that as eating chocolate. There is a lot of sexual tension between two characters. Men complain about women not having sex with them. A man and a woman walk together and he puts his hand on her buttock. A woman overhears two men talking about "how long his hose is," not realizing they were talking about his socks. A woman says to a man, "I'm sorry the guys are riding your tail..." and he replies "I'm not." A man talks about entering a woman's tee-pee, and a woman says to a man "put your hand on it and guide me to the right spot" about adjusting a telescope." A man says to a woman "let's get to bed" and she thinks he's inviting her to have sex. A man and woman talk about a job and the woman says to the man that he should "try a new position, under a woman..." "starting from the bottom and working on up." The tag line for a candy bar is "a mouthful of satisfaction." A woman in a tub climbs out, wraps herself in a robe, and goes behind an opaque screen where we see the silhouette of her nude form as she drops the robe. A woman dances in a corset and stockings. Women on stage dance in tiny outfits that reveal cleavage, bare abdomens and bare thighs. A woman sunbathes in a two-piece swimsuit. A man takes off his shirt to change and we see him bare-chested in a few scenes. We see a man in his boxer shorts, shirt and tie. Three women wear dresses that reveal their ample cleavage. Two women wear dresses that are off the shoulder and expose their bare backs. A man says to a woman "be careful you don't fall out" and she adjusts her breasts in a low-cut, off-the-shoulder dress.

VIOLENCE/GORE 3 - A woman punches a man in the face, a woman slaps a man in the face, a woman hits a man on the head with a book, and a woman is knocked on the floor by an automatic bed and is trapped underneath it. An apartment outfitted with a plethora of automatic devices goes haywire and two people are pummeled with flying albums and moving, jumping furniture and doors opening and closing. A woman speaks threateningly to a man over the phone. A taxi backfires and a crowd of people drop to the ground thinking it was gunfire. A man climbs down a ladder attached to a helicopter and steps onto a rooftop, and a man and a woman dangle from a ladder attached to a helicopter as it flies away. A woman faints and falls back off her chair.

MESSAGE - You may find love where you least expect it. Opposites do attract. 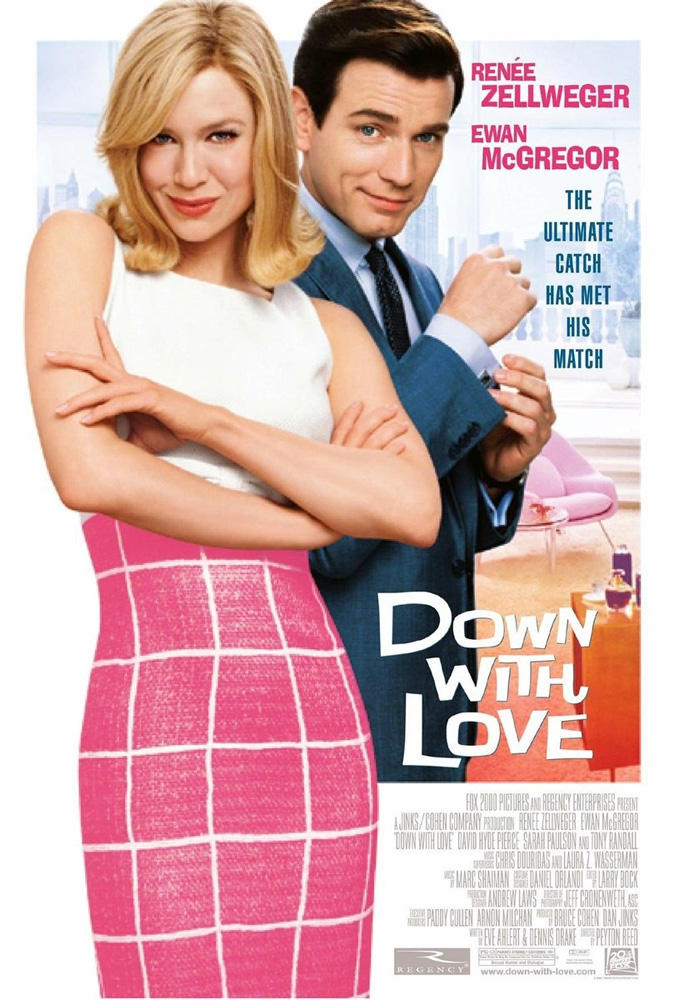