A dolphin's new prosthetic tail saved her life, but a pool mate dies and she becomes depressed. The USDA demands that the director of the aquarium (Harry Connick, Jr.) find her a female dolphin friend or lose her to a Sea-World type home. Also with Ashley Judd, Morgan Freeman, Kris Kristofferson, Nathan Gamble, Cozi Zuehlsdorff, Juliana Harkavy and Austin Stowell. Directed by Charles Martin Smith.[1:47]

SEX/NUDITY 2 - A teen girl feels shut out when her longtime friend at work, a teen boy, talks to another teen girl a few times; in a few scenes, the first girl and the boy stare at each other for several seconds and we expect a kiss, but it never occurs.
► At an ocean-side aquarium, children, teens and adults wear beach attire. Women and girls wear wetsuits that emphasize their breasts and buttocks. One teen girl wears clingy short-shorts and a scoop-necked stretchy top that accentuates her cleavage. At a party, some women wear sleeveless dresses with open necklines, revealing a bit of cleavage. In two pool scenes, two women wearing sleeveless shirts and shorts swim, revealing the very bottom of the buttocks (a glimpse is seen).

VIOLENCE/GORE 3 - A teen girl presents dolphins at a public aquarium show, joking that one of them is "really old" (40 in human years); we hear that the older dolphin dies the next day and we see it lying on the bottom of the pool as an announcement asks the audience to exit the facility and the teenager, some young girls and women in the audience, as well as the facility staff cry; we see the dolphin's pool mate become depressed and she hides under a platform shelf at one end of her tank.
► A crying dolphin, rescued from stranding in shallow water, receives lotion treatment for sunburn and may have a respiratory infection; rescue team members slip a few times in the sand and water while carrying her in a stretcher, but no injuries occur. A dolphin wears sunburn lotion on her back in several scenes and when she recovers, she catches and eats two live fish in a couple of bites, but no blood or gore shows. A rescue team takes a dolphin back to the ocean in an EMT truck and they slowly release her from a stretcher to the water; a team member thinks a school of dangerous sharks is approaching the dolphin, but the school is a pod of welcoming dolphins.
► Two teenagers and a large pelican pull a sea turtle out from under a dock where it is stuck and the pelican takes one of the turtle's legs in its mouth, trying to help pull it out; at a clinic, the bird paces the hallway, peering into the examination room window, as technicians stitch a narrow wound (no blood) cut by a fishing line; at a hospital, a nurse slides the turtle into an MRI as the pelican stares in from outside; when the turtle recovers, a technician captures the pelican and holds its beak shut to allow the turtle to get away and swim into the ocean but the pelican flies over the ocean to watch the turtle.
► A dolphin grunts and thrashes around and accidentally knocks a teen boy into the water tank and scraping his cheek, mouth and chin until it is red and spraining his wrist; a woman pulls the boy from the water and the camera cuts to him wearing a long wrist brace.
► A man shouts very loudly at a teen girl and a teen boy for having swum in a tank of water with a dolphin that has become aggressive. A woman and her teen son argue about an offer from a university to send him on a sea vessel learning experience for one semester. A teen boy and a teen girl argue loudly several times with the director of a marine aquarium over releasing animals back into the wild. Two men argue twice about funding and obtaining a dolphin to replace one that died; in the second argument, one man tells the other that he will release healed animals back to the wild and, "If you don't like it, fire me." In a crowded corridor, a large pelican pulls a woman's purse off her shoulder and steals a small stuffed bear from the contents it scatters across the floor; the woman complains rather loudly and her small daughter cries. A teen boy teaches high school volunteers at an aquarium that dolphins are wild animals and can become aggressive; he tells the volunteers to ask for help immediately from an adult when this occurs.
► A baby dolphin swims into a tank of water containing a tailless adult, sees the injury and the unorthodox way the adult swims, and shrieks, whistles and swims at high speed around the adult dolphin several times; the young dolphin escapes into another tank, as aquarium staff shout in surprise and fear. A baby dolphin swims around an adult dolphin wearing a prosthetic tail, bumps it and the side of the adult with its head, swims a few circles around it at high speed then approaches again.
► A famous surfer who lost an arm to a shark attack wears sleeveless tops and dresses that reveal a stump at her shoulder with a thin, faded scar. A WWII veteran walks across the floor and down a flight of stairs with a flesh-colored prosthetic leg on which are attached patriotic stickers; he peeks into a pool window and a tailless dolphin swims over to look at him. End credits feature about one hundred single-, double-, and triple amputees with prosthetic limbs, canes, crutches, or wheelchairs. Amputees of all ages visit a marine aquarium and learn about their prosthetics and mobility aids and about how animal- and human prosthetics help scientists to develop new, lifelike appendages. A small child wears flippers on the ends of his leg stumps to swim in a pool with a dolphin. A dolphin swims without her prosthetic tail in the film and end credits, approaching people with injuries to let them look at her tail stump as she sticks it up from the water for them to see.
► A rescue team arrives at an aquarium in an EMT vehicle with siren and flashing lights; a man picks up a baby dolphin from the back of the vehicle and carries it to a long stretcher padded with a towel, from which a team slowly lowers the baby into a tank of water and releases her.
► A dolphin spurts water at a teen boy's face in several scenes as he works with her in her tank. A dolphin blows a rude "raspberry" sound at a man after he had been accosted outside by teen volunteers mistaking him as a trespasser and he says, "My sentiments exactly."
► As a car pulls away from the shoulder of a road, a large flying pelican buzzes the windshield, causing the driver to slam on the brakes with a squeal (no injuries). A teen boy and a teen girl, busy reading as they walk, slam hard into each other around a corner but are unharmed.

SUBSTANCE USE - Small vials contain unknown fluids in an aquarium lab, and we hear that a dolphin receives antibiotics and we see a technician holding a hypodermic syringe near a sea turtle (no injection occurs). Men and women as well as teen boys and girls at a party carry tall drinks containing small umbrellas or cherries or drink-picks filled with fruit slices and it is unclear whether any of this is liquor (no one is shown drinking).

DISCUSSION TOPICS - Friendship between humans and between animals as well as between humans and animals, animal rescue and preservation, education, making choices, following regulations, death, loss, healing, letting go, growing up, remaining committed to important ideas and values, retaining a sense of wonder.

MESSAGE - Friendship is one of the most important concepts among animals and people. 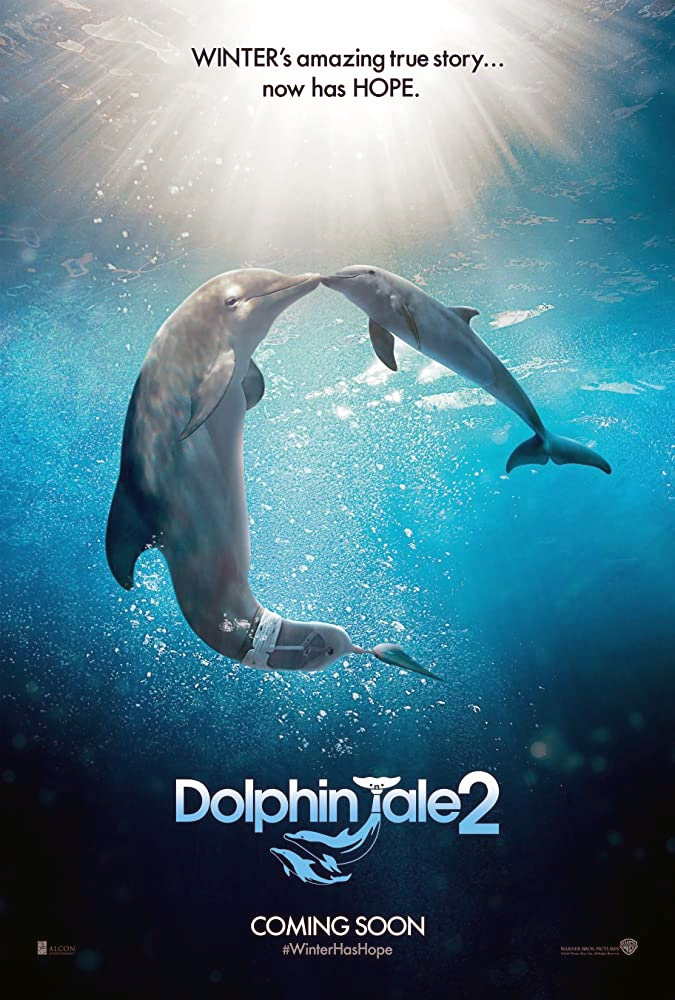