Why is “Disenchanted” rated PG? The MPAA rating has been assigned for “mild peril and language.” The Kids-In-Mind.com evaluation includes a few kissing scenes, a teen boy and a teen girl flirting, several scenes of violent acts toward a teen girl without permanent injury, several scenes of magic causing unusual activity, arguments and some name-calling. Read our parents’ guide below for details on sexual content, violence & strong language. In this sequel to 2007’s Enchanted, Giselle (Amy Adams) and her family are happily living in Manhattan, until she feels compelled to move to the suburbs. Her husband (Patrick Dempsey) and their daughter (Gabriella Baldacchino) are frustrated with the change, magic intervenes, but life is not the fairy tale they expected. Also with James Marsden, Idina Menzel, Maya Rudolph, Yvette Nicole Brown, Jayma Mays, Kolton Stewart, Oscar Nunez and Griffin Newman. Directed by Adam Shankman. [Running Time: 1:58]

– A man and a woman kiss quickly in two scenes, and they kiss for several seconds in another scene.
► A teen girl and a teen boy smile at each other in several scenes and finally announce that they will begin dating.
► Several scenes include a woman and a teen girl wearing dresses with necklines that reveal cleavage. A few scenes feature several women wearing ball gowns revealing cleavage. A woman dances and the skirt rises up to show her slip and one knee. A teen girl wears short shorts in two scenes and several girls in a high school wear miniskirts that end a few inches above the knee.

– Two women at a dance say, “One of us has to die” and have a magic duel with shock-waves, dancing, and singing as shock-waves fill the hall and giant vines and a tree grow through the floors that shake as if by an earthquake, a chandelier falls and shatters loudly midair, vanishing before it can harm anyone, a swarm of attacking birds vanishes, and many moths chase men in armor off-screen; a teen girl tosses a drawing of good memories to a dueler, who rips it up, but magic dust rises and the dueler stops fighting and becomes nice but the other dueler takes the teen girl hostage, puts her to sleep with an unknown substance, and uses magic to make vines encase her and start squeezing.
► A woman mistreats her teen stepdaughter, belittling her, grabbing her by the arm, twisting her wrist, and pushing her into a well; we hear screams and a big splash of water, but the girl is fine in the next scene.
► Many scenes show magic causing birds, animals, appliances, and a broom to dance and sing; golden whirlpools and swaths of sparkles form in the air and in a wishing well, and bolts of blue and gold sparkly shock waves emanate from the hands and fingers of two women. A woman uses shock waves to turn two other women into toads. A wish on a magic wand turns a small town into a medieval fairy tale kingdom, and a town official becomes the evil queen.
► A scroll rolls itself out, makes accordion folds for a mouth and body, and talks in a few scenes. A scroll tells its owner that using the wand to make a town into a fairy tale will become permanent after the clock in the clock tower strikes midnight. A worker falls on stairs in a house but is uninjured. A light switch sparks and sets a floor on fire, also burning a box of clothing, but a man and a teen girl put out the fire with rags. A toaster smokes in a kitchen, the refrigerator smells bad, and a man spills coffee on a teen girl; no one is injured.
► A man in a medieval town startles a friend by giving him a sword and the friend then goes off to hunt dragons; he finds a cave with a fireball inside, steps in, and is thrown out as we hear roars and a large firestorm spews out and sends the man sprawling (he is singed but not burned). A giant stomps after a man but he escapes after being dragged several yards by a rope he is holding; he is not hurt and he gets up and runs to save a little girl from a falling kiosk roof of logs.
► A woman argues with a man’s face in a magic mirror, then hears about a magic wand and makes her two servants steal it; however, a magic scroll tells her the wand won’t work for her. After a chipmunk turns into a cat after gagging, coughing, and swelling up, a woman sends it to steal a wand. A woman builds a kiosk at a high school to ask students to vote her daughter as princess of a dance, but the girl becomes upset and tells her mother to stop, and another woman tells the mother to take down the kiosk.
► A chiming clock in a tower magically curses a princess, who becomes confused; her good side argues with her bad side and the bad side takes control over the course of several scenes. A woman pulls a cat’s tail, loses it, and accidentally pulls down draperies, but is unharmed. A teen girl enters a cartoon fairy tale kingdom through a magic portal, where we see a king and queen with a friendly ogre, all looking at a large hole in the sky where sparkles and vines move through it. A teen girl finds a large memory tree with its flowers dying until she touches the flowers and they come back to colorful life. A teen girl learns that the kingdom’s magic travels to her medieval town via a portal, and once the spell is permanent at midnight, the cartoon land will disappear forever. A cartoon ogre and king collapse in a magic portal because magic is being used up. A dueler takes a magic wand from another dueler and breaks it in two. Two men enter a clock tower and grab gears and strain to keep the clock from striking midnight.
► A baby cries loudly for several seconds in a couple of scenes. A tiny dragon emerges from a dragon fruit, snorts smoke and then goes back inside. A woman accidentally kicks a chipmunk into the sewer and it later complains of smelling like the gutter. Two women fall backwards over large chairs, but are not hurt. A teen girl is locked into her tower room, but safely climbs down a sheet through her window after we hear her stomach churn and growl. A teen girl disappears for a day and her father yells at her when she returns; she rushes away to her bedroom. A man fights three small boys, all with wooden swords and the boys hit him in the legs, causing him to say, “Ouch” (no injuries are seen).
► Two women argue several times, two men argue briefly, a teen girl and her mother argue briefly. A woman on a commuter train says, “You ride the train over and over and over, and then you die.” Three women in a coffee shop complain of headaches from a bad dream. Teen girls in school laugh and point at a classmate wearing long-sleeved dresses that end below the knees.

– A man holds a bottle of wine and pours a glass (he is not seen drinking).

– Real life can be better than a fairy tale. 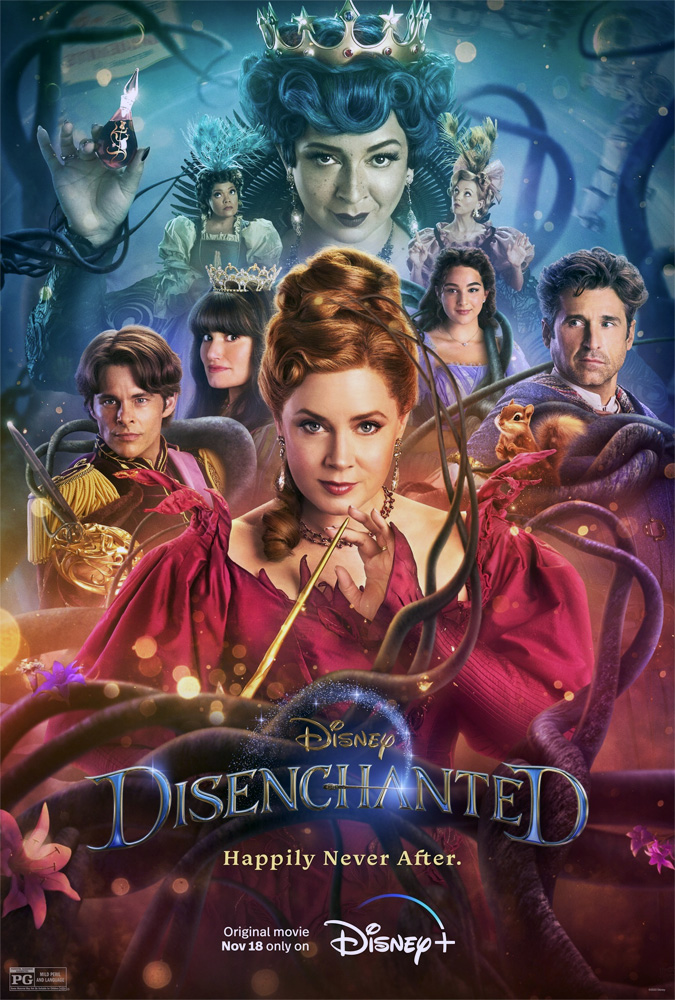