In this sequel a happy new dad (Steve Carell) to three adopted little girls is recruited by the Anti-Villain League to help quash the antics of a new super-criminal mastermind (Benjamin Bratt). His minion helpers are not always very much help. Also with Russell Brand, Ken Jeong, Miranda Cosgrove and Kristen Wiig. Directed by Pierre Coffin & Chris Renaud. [1:38]

SEX/NUDITY 3 - A woman kisses a man quickly on the cheek and later they try to kiss on the lips briefly and their noses get in the way twice before they succeed. A man and a woman dance as minions sing love songs in French accented nonsense syllables.
► A man dresses as a female good fairy at his daughter's birthday party; capsule-shaped minions wear female clothing and one is shown wearing a French maid costume while wiggling hips and singing nonsense syllables; another wears a grass skirt and a coconut shell bra while doing a hula, and another wears a fruit headgear and dances like Carmen Miranda; a minion wearing a little-girl disguise loses the skirt on an escalator, revealing pink panties and hides in a flowerpot; in a daydream, a woman imagines a man dressed as three different large women with big bosoms and a lot of lipstick. An overweight man wears a Mexican wrestling costume several times that is tightly stretched and his bare chest and arms are seen A man wearing a red long-sleeved shirt and tight black trousers dances around his restaurant; women swoon into their food, face first; he shakes his hips into the camera once and gives a woman his business card with a wink. A man rips open his shirt to show the Mexican flag tattooed on his overweight and hairy chest. In a beach scene, a minion runs off camera, tosses his coveralls back onto the sand, and the camera cuts to his butt cheeks as he runs into the ocean. Four overweight women wear sleeveless dresses that bare their arms and show cleavage. A few women wear pedal pushers or long shorts that show bared lower legs. An outhouse door opens and we see a seated man with a large newspaper (his hairless lower legs are exposed). A woman reads a magazine in which a man dives off a Hawaiian cliff wearing long shorts that reveal his lower legs and bared shoulders, upper chest and arms.
► A woman tries to force a man to date her friends and family members and he refuses but relents and goes out with one friend who wears a sleeveless dress that reveals cleavage and has giant collagen-injected lips; he wears a wig to be more attractive because a wig salesman said, "Bald is bad"; but it keeps moving around his head.
► Three little girls talk about their dad falling in love one day and he keeps saying he does not need a date; they ask him if he is afraid and he denies it. A father asks his young daughter, "Who are you texting?" and she answers, "My friend, Avery"; he says, "Avery? Is that a girl's name or a boy's name?" she asks, "Does it matter?" and he replies with a growl, "No, it doesn't matter, unless it's a boy!" A young girl says to her Dad, "I know what makes you a boy... your bald head!" A Dad tells his daughter that she must stay 6 feet away from all boys.
► A little girl sees a young boy at the mall and falls in love when he tosses his hair; she stares with open mouth and they have cookies at a café and attend a party in a few days; they break up when he dances with another little girl. A minion falls in love with a human woman at first sight, his mouth falling open as he daydreams of a picnic with her. Two men become sad over the loss of girlfriends who moved.

SUBSTANCE USE - Purplish jelly made from all fruits at once makes people gag and say "Yuck" (later it is used as a weapon), a woman shoots a tranquillizer dart into another woman's bottom and the victim falls asleep in her food in a restaurant, a scientist makes a purple serum that changes living creatures into purple monsters and he later makes a yellow antidote to change them back, and a woman says that she gets a buzz from being a spy and capturing a man. A minion imagines drinking champagne under a tree with a woman, three restaurant scenes and one scene in an outdoor sushi bar show alcoholic drinks on tables (no one drinks), hundreds of minions party with mugs of ice cream drinks and a few act as though drunk when they slur their words and stumble, and margaritas are served at a celebration (no one actually drinks). A minion pretends to smoke a cigarette (it's a toothpick).

MESSAGE - Dads can be heroes and find love, even if they are fat and bald. 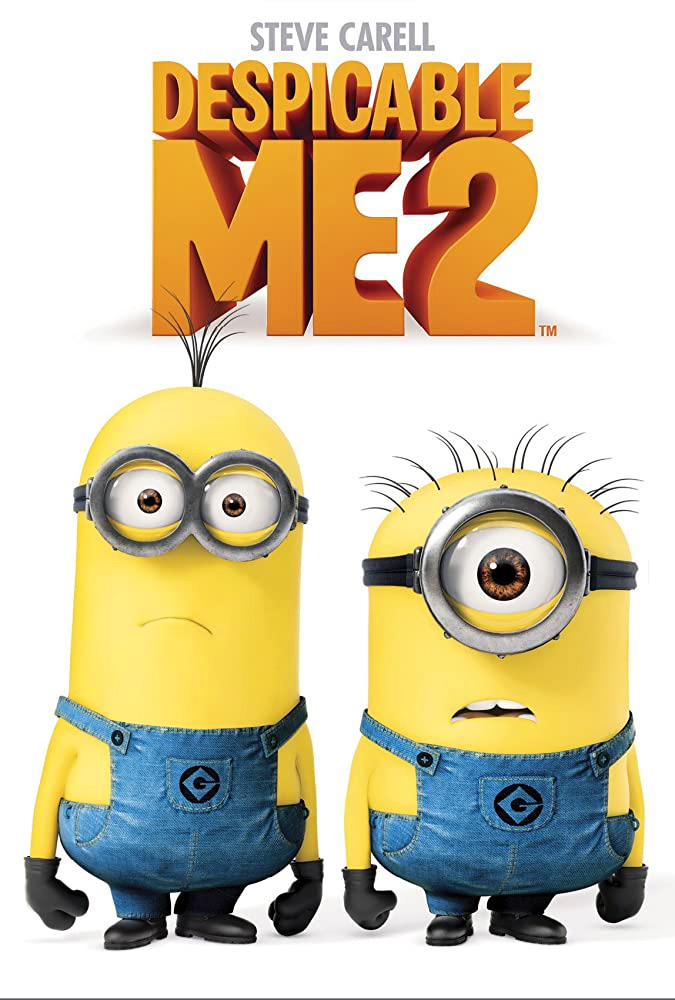