Three former Israeli agents (Helen Mirren, Tom Wilkinson, Ciaran Hinds) have to live with the consequences of a lie they told many years earlier about the capture of a Nazi war criminal. Also with Sam Worthington, Marton Csokas, Jesper Christensen and Jessica Chastain. Directed by John Madden. [1:53]

SEX/NUDITY 6 - A man and a woman kiss, they undress (we see her in bra and panties and he is bare-chested), the woman straddles the man (her bare thighs are visible), we hear moaning and they have sex while another woman is standing nearby.
► We see photographs of nude and emaciated bodies; a woman's bare breasts are shown and an infant girl's genitals are visible. Several women are shown wearing low-cut dresses that reveal cleavage, bare shoulders and backs. A woman is shown wearing a full slip that reveals cleavage and bare shoulders. A woman undresses for a medical exam; she puts on a gown and removes her panties (we see them fall to the floor and her bare back is visible along with a bra strap).
► A man and a woman play the piano together, the man caresses the woman's face and neck and they kiss (sex is implied when we see the woman dressing and the man lying in bed, bare-chested). A woman with a towel wrapped around her (her cleavage is visible) exits a bathroom, a man watches her and then brushes her hair, and she leans toward him to kiss him before he leaves the room.
► A man and a woman kiss in a few scenes. A man and a woman hug and hold hands in several scenes. A man and a woman hold hands in several scenes. A man taps a woman's buttocks using a notebook as he passes her; she smiles.
► A doctor performs a gynecological exam on a woman: she places her feet in stirrups, the doctor places a lamp between her legs and reaches under her gown while explaining the devices being used for the exam. A doctor performs a gynecological exam on a woman and asks her if she had sex the night before; she answers in the affirmative.
► A man says to another man, "You don't notice women… Is there anything you have to tell me before I get into that bed with you?"

VIOLENCE/GORE 7 - A man steps in front of an oncoming truck, we see him struck, his body is dragged under the truck and his head is crushed under a tire (we hear a crunch and blood splatters on the road).
► A man with a pair of scissors stabs a woman in the neck (we see blood on her shirt), she screams and falls to her knees, she stabs the man in the leg with a shard from a broken mirror and he stabs her in the chest (we hear a crunch, we see blood and she moans loudly when he pulls the blade out); blood drips under her as she walks away.
► A man is shot in the back and we see him fall to his knees and then to the ground motionless (we see a patch of blood on his shirt). A man collapses dead on the floor and we see him with a syringe sticking out of his back. Two armed guards are disabled and others shoot at two men and a woman as they escape in a van, speeding through a gate and nearly colliding with an oncoming car.
► A woman is struck in the face by a man with a shard from a broken plate, they struggle and fight, the man slams the woman into a radiator, she falls to the floor, he kicks her twice in the head and she lies on the floor unconscious and covered in blood; we see a jagged cut on her face and this scene is replayed several times. A man slams a bowl into another man's face, and then punches him repeatedly; a woman tries to stop him and he accidentally punches her in the face (we see her bloody lip) and another man eventually pulls him away.
► A woman lying on an examining table grabs a man's head with her legs and injects him in the neck with a syringe; the man struggles, tries to strangle the woman, and then falls to the floor unconscious.
► Two men attempt to force-feed another man: the man struggles and resists during several attempts and food ends up all over him and on the other two men. A man spits in another man's face several times, and the man raises his hand but does not hit him. A woman strikes a man in the head.
► We see a man seated or lying on the floor with his hands tied behind his back and tape across his mouth in several scenes. A man is bound and gagged and lies unconscious in the back of a van.
► A man steals a car and he and a passenger speed away. A woman breaks into a newspaper office. Armed guards are shown posted at a railway station. A woman wakes up in a start after imagining seeing a man standing behind her.
► Two men and a woman practice fighting using a mock knife in a few scenes; they throw each other to the floor and hold the knife to their throats, and in one scene they seem to be exchanging actual blows.
► A man with a gun threatens another man. A woman shaves a man using a straight razor and the man asks her why she doesn't kill him. A man yells and kicks a pot of water. A woman throws a dresser drawer against a wall.
► We see photographs of dead children and emaciated people piled on the ground. A woman is shown with a jagged scar on her cheek in numerous scenes. A woman is shown with a bandage on her face in several scenes. A woman is given an injection at a doctor's office and she winces (we do not see the shot). A man is shown with an IV port in his hand.
► A man tells another man, "You blind children, you inject people with petrol." A man says, "You Jews don't know how to kill, only how to die." A man says, "You [Jews] have no right to live." A man says, "We are not animals." Three people yell at each other in panic. Three people argue in a few scenes. People talk about a man doing experiments on prisoners that will leave them disfigured or dead.
► A woman vomits in a toilet; we hear retching and splatter. We see cockroaches in a sink filled with dirty dishes and food.

MESSAGE - Secrets can end up destroying the secret keeper. 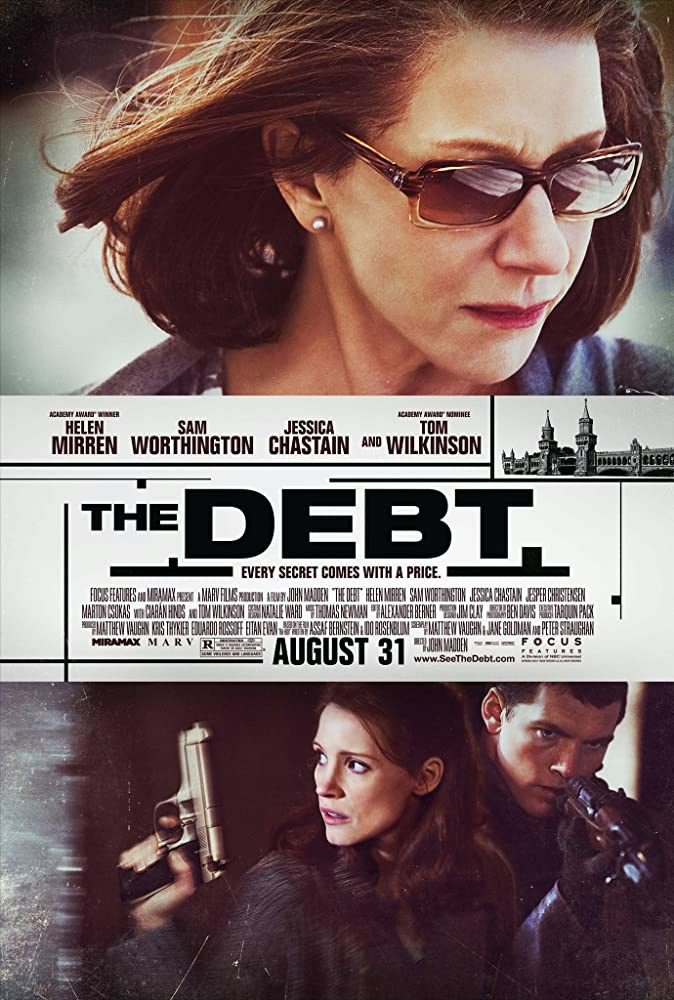