SEX/NUDITY 4 - A husband and a wife kiss, she makes a suggestive remark about why she married him, he lifts her onto a counter, lifts her skirt (bare thighs are visible), they continue to kiss and are interrupted. A man and a woman hug.
► A fully nude man stands in a prison shower room (bare buttocks, legs and chest are visible). Women wear tight-fitting, low-cut and short tops and short shorts that reveal cleavage, bare shoulders, abdomens and bare legs in several scenes.
► Men whistle and make catcalls at women getting off a bus. A man talks about another man being gay. A prisoner makes a crude remark about a female warden's buttocks.

VIOLENCE/GORE 8 - Napalm is set on fire on a car that is speeding on a roadway, the flames spread inside the car, we see the driver in flames, he thrashes and screams, and the car spins, rolls and crashes.
► After his car crashes, a man with large cuts on his face gets out of his mangled car and walks in the roadway; he is struck from behind by another car with a large gun barrel that rips the man's head off at the shoulder (we see blood and matter splatter). A man breaks a man's neck with his hands.
► Two men are shot in the face (we their features turn to blood and organic matter). A man is shot repeatedly (we see blood on his chest).
► A man is struck with a bat, a chain is wrapped around his neck, and another man punches him in the face and holds a large wrench over him; the man with the wrench is then stabbed in the shoulder with a pen (we see a bloody spot on his shirt), and the first man gets free and beats several men with auto mechanic tools (one man is stabbed in the leg with a shard of metal). A man is struck in the legs with a large wrench and another man steps on his fingers breaking them (we hear crunching). A man beats several other men using a metal food tray (we see one with a bloody mouth) and they are all held at gunpoint by guards.
► A man wearing a mask stands behind a woman, and when her husband enters to find her unconscious on the floor, he sprays him in the face rendering him unconscious also; the husband wakes up with police pointing guns at him, he has a bloody knife in his hand and is next to his dead wife who has bloody abdominal wounds and there's blood on her mouth and the floor.
► A huge truck with weapons fires on cars during a race, and there are many explosions and flames; the truck also has large spikes on the side that drill through cars and one car and its passenger are drilled through (we hear her screaming, blood splatters on the car and driver and we see the bloody drill when it is pulled back out of the car).
► During a car race, cars fire weapons at each other, the driver of one car is shot, blood splatters on the windshield and the car crashes and burns; the passenger of another car is shot and we see blood on his face and neck. During a race, a car drops a heavy metal plate on the ground, and it bounces and hits a car behind it taking off the side of the car and the passenger that was inside. A car is struck by a rocket, and the car flips and explodes with the driver still inside.
► During a race, cars slam into each other, a driver punches his passenger in the mouth and a driver has a bloody face and his car explodes with him in it (we see "deceased" written across a screen and an X marked over his picture). During a car race, oil is spilled on the roadway and spikes are dropped on the ground, and a car spins out of control, it is shot by a rocket and explodes. A car is caught in chains attached to a huge truck and the truck shoots a cannon at the car (we see the panicked look on the face of the driver just before he is struck).
► A man is kicked out of a speeding car, he slams into a metal staircase and lies dead on the ground. Several cars crash, burn and block a roadway. A large truck crashes into a barricade, and it flips and explodes throwing passengers through the air. Flames are shot at a car and the driver grimaces from the heat (he's OK).
► A man cuts his face with a razor blade (we see blood and scars from other cuts). A nude man is sprayed by a large water hose (he moans and flinches from the power of the spray), and he is then beaten by a man using a club. Riot police charge onto the scene at a plant closing, a man throws a rock at them, he is shot with a rubber bullet and falls to the ground, another man is shot and several men are beaten with clubs. Two men fighting in prison are tasered by guards (they fall to the floor twitching). A woman holds a gun pointed at a man's groin.
► A tower and satellite dish are destroyed (it explodes). A car smashes into the side of another car and it is disabled briefly.
► A man taunts another man calling him a wife killer and says he probably "rapes kiddies too." A man talks about a man being a psychopath. A man talks about how many men other men have killed. Men threaten each other in several scenes. We hear about cage fights to the death and about death races where drivers race armed vehicles and only one driver survives. We hear about a man who is so disfigured after many car crashes that he has to wear a mask. A reference is made to auto carnage.
► A man spits a large glob into another man's food tray (we see the goo).

SUBSTANCE USE - A man drinks alcohol from a bottle. A man holds a cigarette, then lights and smokes it, and a man smokes in several scenes.

MESSAGE - The drive to protect family can inspire to overcome seemingly insurmountable circumstances. 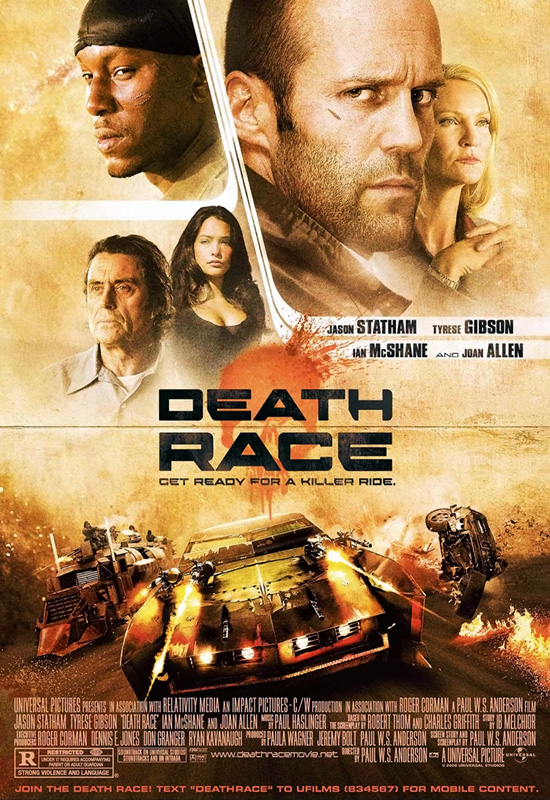