Damon Dash directs this tongue-in-cheek look behind the scenes of a hip-hop record company, and the gossip mongering that pulled it apart: A young journalist starts following two music moguls around to get some inside dirt and ends up writing an article for a tabloid newspaper that starts a rivalry between the partners. With Ebon Moss-Bachrach, Devon Aoki, Chloë Sevigny, Capone and Robert Stapleton. [1:33]

SEX/NUDITY 5 - We see on a computer screen a bare breasted woman lying down and moving rhythmically, and we hear her moaning and panting.
► A man is introduced to a woman, he seems enraptured, he moans, thrusts his hips toward her, and she hugs him. A man imagines dancing with a woman, she leans over him and asks if there is someplace they can be alone, he moans and imagines her crawling onto a bed. A man, bare-chested and in shorts, dances with a woman in a thong bikini (we see cleavage, bare buttocks and bare abdomen and legs), and he thrusts his hips toward her. A man makes a sexual remark and thrusts his hips forward.
► A man in long boxers stands on a ledge above several women in bikinis (we see cleavage, bare abdomens and part of bare buttocks are visible); they all dance, the man pours champagne over them and the camera focuses on the breasts of one woman. A man lifts a woman up, she wraps her legs around his waist and they dance together. A woman wraps her arms around a man's neck, another walks along with him holding his arm (she wears a dress that is cut to the belly button and has laces across the front revealing her cleavage and bare abdomen). Two women make sexual gestures with their tongues.
► Women walk along a stage in a fashion show wearing bra tops and short skirts (revealing cleavage, bare abdomens and bare thighs. Many women wear tiny bikinis at a pool party/cookout. A woman wears a very short top and very low-cut pants revealing her bare abdomen to the hip, a woman wears very short shorts that reveal part of her bare buttocks, and a woman wears a short dress that reveals cleavage and bare thighs). Many women wear low-cut dresses that reveal varying amounts of cleavage, bare abdomens, bare shoulders and backs throughout the movie.
► Men and women kiss in several scenes. A man and a woman snuggle and hug and two men and a woman hug and kiss on the cheeks.
► A woman tells a man that she has the "VTs" and defines that as a part of her body "tingles." A limo driver tells his passenger that someone "...had sex on that very seat." A man moves his lips while looking at a woman and subtitles read, "I will have you..." A man asks another man if he is still having sex with a woman. A man says about a woman, "She's got a thing for me." A man talks about his Viagra wearing off. A woman's pants appear to be stuffed with padding.

VIOLENCE/GORE 4 - A crowd gathers around a man, people argue and yell, someone yells "he's got a gun," we hear gun shots, hear the crowd screaming, and people run and a man is taken away in an ambulance (we see this scene twice). Several women on a stage fire guns in the air.
► A man punches a man in the nose (we see blood on his face), and then another man punches him in the face and he falls on the floor. A man walks along a street, he is surrounded by four other men, he is afraid that they are going to rob him, they yell at him, one comes close to his face with a lit cigarillo, one grabs his ear, we hear cartoon punching noises and see the man lying on the sidewalk after apparently being beaten up. Four men crowd around and shove a man in an elevator, one man stomps on his foot, we hear cartoon punching noises and see the man curled up on the floor of the elevator.
► People yell at each other in many scenes throughout the movie, and a man confronts another man in front of a crowd of people. A woman grabs a man and threatens to hit him and a woman threatens to punch a man in the back of the neck.
► We hear a man coughing and saying that he has a hole in his lung and that he has two kids who almost lost their daddy (he was the victim of a shooting). We are told that a man lost his hair and genitals in a street fight. A written line reads "kill whitey."

SUBSTANCE USE - Three people smoke what is presumably marijuana from a bong and several people smoke a large marijuana cigarette. People are shown holding and drinking from bottles of alcohol throughout the movie. Many people drink alcohol at a pool party/cookout. Many people hold glasses of alcohol at a party and many are seen drinking. People drink wine at a restaurant in a few scenes, and people hold glasses of champagne while dancing in several scenes. A couple of men smoke cigarettes in many scenes, another man smokes a cigarillo, and another man smokes cigarettes. A man smokes a cigar and talks about his Viagra wearing off.

MESSAGE - Gossip can tear down even the most successful business. 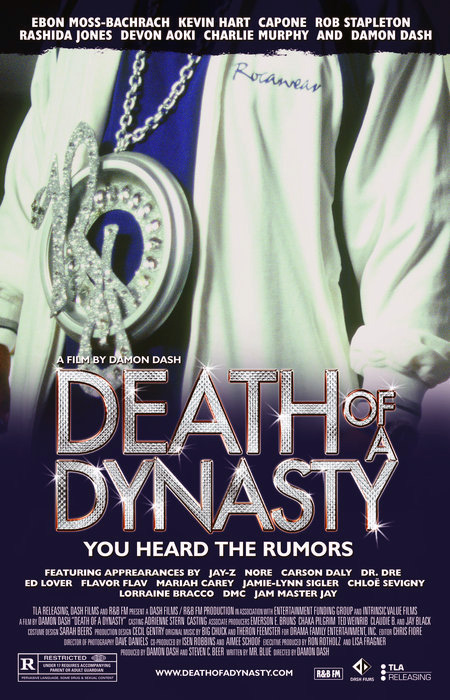