SEX/NUDITY 5 - A dwarf claims to be a deceased man's gay lover and blackmails the man's oldest son with photos showing him with his father in cocktail dresses and sailor outfits (a third photo is not shown, but three people react to it with loud gasps, with one saying he did not know the older man knew yoga, and implying gay sex). A dwarf rubs his open lips and says he sacrificed for a deceased man (implying oral sex). Photos of a now deceased man and his implied gay lover are dropped on the floor in front of a coffin and the deceased's wife looks at them and begins screaming and beating up the lover (please see the Violence and Gore category for more details). A dwarf is laid into a coffin containing his deceased older male lover, face down on the corpse's groin.
► A woman in a short bathrobe and showing cleavage and bare legs takes her temperature and tells her husband she is on the last day of her cycle, is 37 years old, and they need to "do it"; he declines. A wife asks her husband to have sex with her several times during a funeral and a wake, and he declines saying it's not the time.
► Three women attending a funeral display a large amount of cleavage in low-cut dresses. A teen girl wears a dress that is low-cut in front and clingy spandex that reveals extreme cleavage, bare arms, bare middle back, bare legs and upper thigh. A man at a funeral leers at a scantily clad teen girl several times, follows her around and asks her to meet him in New York; she agrees and we later see him get into a car with her and they drive away (sex is implied). A naked man under the influence of LSD climbs onto a rooftop and threatens to commit suicide because he saw his fiancée kiss another man (we see him waist-up and from the back, and also in three close-ups of bare buttocks and with his knees up and legs crossed in front of him). A man dressed in boxer shorts, suit jacket, shirt and tie, leaves a room. An elderly man is shown in close up, looking at the night sky when the camera cuts to a long shot and we see that the man seems to be naked: we see bare legs, chest and arms.
► A man grabs another man's fiancée, she struggles, he grabs her face and kisses her, she pulls back and yells at him, her fiancé witnesses the kiss, screams that she is cheating and the scene ends.
► An elderly man and a younger man discuss women, the first telling the second to shake a woman first to show strength and then kiss her. A few discussions occur about a gay relationship. A man confesses to a pastor that he has been looking at strippers with scars. A woman tells her fiancé that she is pregnant and he is happy about it. A woman tells a man their first night together was good because he was drunk. An author names his sexually suggestive books in conversation: "Rhonda's Tiny Box" and "Mamma's Secret." A pastor says he enjoyed reading a book with a sexually suggestive title, but that he should not be reading that kind of thing. A gay man says that he and his partner loved a book with a sexually suggestive title.
► An elderly man is shown seated on a toilet three times. A man scratches his shorts-clad buttocks in a close-up on the way out of the room.

VIOLENCE/GORE 5 - Several scenes feature a man's body in a casket that is either open or closed and in one scene, a man hallucinating from LSD imagines a movement in the coffin during a funeral, he stands up, yelling to open the casket while mourners grab him, and the coffin topples and rolls as a fight ensues and the deceased rolls out onto the carpet: people run and scream, a woman is knocked off a chair, others fall off chairs, a pastor yells curses, and men yell and punch each other (we don't see anyone hurt); in another scene, a dwarf rattles the coffin from the inside, pops up the lid, screams obscenities and a family fight ensues and the deceased's wife yells obscenities and beats the dwarf with her purse and fists (we see no blood).
► Two men feed another man LSD and throw him behind a couch, we later see him dancing on the couch during a hallucination, and he falls and strikes his head on a glass coffee table (it cracks) and suffers a small red gash on his forehead; the other men think he's dead and put him in a coffin with another dead body.
► Two men wrestle a dwarf, tie him up with a curtain cord and gag him with a necktie. Five scenes portray pairs of men swinging punches at one another, wrestling, name-calling, and threatening with their fists in the air. A man on LSD grabs a pharmacy student by the lapels, slams him into a wall, and yells at him for putting LSD into a Valium bottle.
► A man picks up an elderly man up from a wheelchair to help him sit on a toilet, pulls down the man's trousers, gets his hand stuck under the man and when he pulls it out we see that it is covered with feces (he screams and washes his hands, but splatters feces on his face and the mirror and later several people remark that they smell something bad when he comes around them).
► A man under the influence of LSD climbs, naked, onto a rooftop and threatens to commit suicide by jumping off. A man threatens to put another man in a coffin.
► A man looks inside a coffin, sees a gaunt Asian man and argues with the undertaker because the dead man is supposed to be his father, but is not. We see two men in coffins in separate scenes. A cartoon sequence displays a coffin in the back of a hearse with a license plate that reads "DECEASED," while a song plays with lyrics, "You don't have to die to live"; the scene becomes live action and we see a coffin in the back of a real hearse. A coffin is delivered to a large house and placed on a bier in the parlor.
► A woman riding her electric chair-scooter in the street points a finger into the air repeatedly when a driver honks at her -- it could be mistaken for an obscene hand gesture, but it is her index finger.
► A man driving a car tells his friend that funerals are about death and are unhappy, and the two men bicker. Two friends bicker constantly throughout the entire film, as do the family members and friends of the deceased. An elderly man calls everyone else names and hits the backs of their chairs and car seats with his cane. During a funeral, a man calls out loudly, "I wouldn't wipe my ass with it" (referring to another man's book). A man jokes at a funeral, "No matter how much a ticket costs, if the plane crashes, you're still dead." A man, tired of a funeral, says, "Let's just burn him and get it over with." A man talks about watching strippers that have ugly C-section scars and stretch marks.
► A man who has mistakenly taken LSD runs to the bathroom to vomit with his hand over his mouth; we do not see hear him become ill.

SUBSTANCE USE - A pharmacy student with a designer-drug lab is shown with four medicine bottles labeled "Valium" and when a man takes one of the pills, it turns out to be LSD: throughout the film, the man smiles oddly, dances, sings off key, talks to statues, hallucinates pleasant aromas, listens to a large leaf "sing," hugs a woman and talks into her bosom, becomes temporarily blind, forgets where he is, and locks himself in a bathroom; a man under the influence of LSD is naked on a rooftop and threatens to jump off, an elderly man sits nude on a rooftop, stargazing, after having been given LSD, a man force-feeds another man hallucinogens (believing they are Valium that will put him to sleep), and a man listens to a blackmail threat and asks the second man, "Are you smokin' meth?" A woman tells a man their first night together was good because he was drunk. A man riding in a car lights up a small cigar and smokes during the ride.

MESSAGE - Funerals can are not only about grief when deeply held family secrets are revealed and old resentments surface. 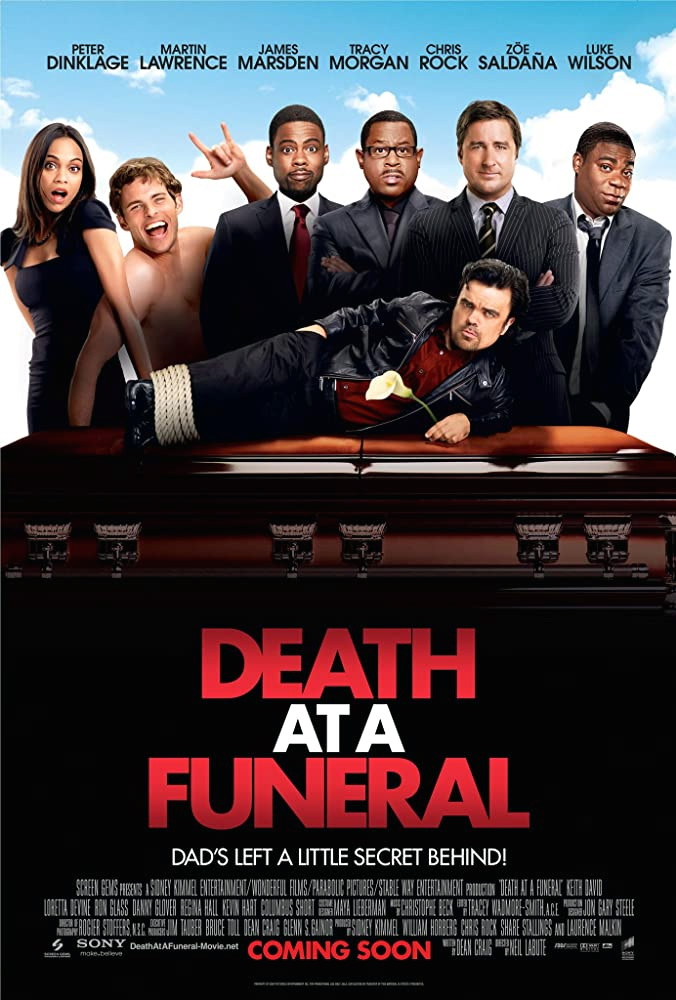