SEX/NUDITY 1 - A husband and his wife kiss and press their foreheads together in a few scenes.
► We hear that a man lost his mind to syphilis.
► A man in a bathtub behind a closed door dictates to a young woman outside the door and we hear him exit the tub as he calls out, "I am coming out in a state of nature," causing the young woman to run down the stairs (we see the man's bare legs from the knees down). A man wearing a robe and a night dress gets out of bed; when he lifts the sheet to move off the bed we see a flash of his bare legs to his shadowed crotch and a young woman in the room (taking dictation) gasps at the sight.

VIOLENCE/GORE 3 - Many wounded soldiers are seen underground in a bunker as fires burn on the surface (we see bloody wounds, blood in IV Bags and we hear some men screaming in pain); we then see bombs dropped on the area and read that "Calais is fallen." A dead man is shown in close-up with his eyes open (his eyes are red and his face is smattered with dirt).
► Men argue in the House of Commons chamber over the loss of confidence in the Prime Minister's (Neville Chamberlain) ability to govern. We hear on radio broadcasts that Germany invades Belgium and Holland and is poised to attack the remainder of Europe. A man yells at a young woman about the way he wants her to type his notes and speeches; she leaves the room in tears. We hear that 200,000 French troops capitulate after a German invasion. We hear that the British navy is devastated by German aircraft. Men talk of the collapse of Western Europe. Men yell and argue bitterly in several scenes. A man says that he believes they should wage war until victory is won. A young woman talks about her brother not having made it when he was trying to get to Dunkirk with his regiment. People discuss lying to the public about the truth of the circumstances of war. We hear that the British army is being pushed to the sea and the troops are trapped. A man orders a commander to draw attention away from another area and the act is described as suicide. A man gives an order, "Every man for himself," to a commander in Calais where they are undergoing sustained bombings. We hear, "Calais is fallen," and "Belgium has fallen and will surrender." Men talk about the "Imminent invasion of our island." The British king considers evacuating England to Canada with his family. A man talks about fighting until every last man is choking in his own blood on the ground.
► Many people are shown evacuating areas as a military transport plane flies overhead and we hear that the refugees are clogging roadways. A man is described as lacking judgment. Several people during a toast wear gas masks (presumably as a joke).
► We see newsreel-type footage of many German soldiers in formation, heavy weapons, tanks and Hitler planning attacks over table-sized maps.
► A man uses a hand gesture thinking that he is signaling "V" for victory and is later told by a young woman that the way he is holding his hand is an obscene British gesture. A man says that he has cancer and we later hear that he died from it. A man explains to a young woman that "No women are allowed" in certain rooms and that not obeying the rules could lead to 2 years imprisonment. A wife angrily tells her husband that they are broke. A man says that he just received, "A royal rap on the knuckles."
► We see a man seated on a toilet while talking to men outside; he gets up and we hear a flush (no nudity is seen and no sounds of evacuation are heard).

SUBSTANCE USE - A man takes a swallow from a vial of morphine and appears to be in pain (he has cancer). A man is shown drinking whisky with breakfast and champagne with lunch on a regular basis, a man on a military transport plane is handed a glass of whisky, a man talks about another man drinking all day, a man asks another man how he manages drinking during the day and the other man says practice, and people open a bottle of champagne and drink a toast. A man smokes large cigars in many scenes throughout the film, a man smokes a cigar while eating and another man smokes a cigarette at the dining table, a man smokes a cigar in bed in a few scenes, men smoke cigarettes in many scenes throughout the film (both indoors and outdoors), and two men smoke on a subway train.

MESSAGE - At a time of existential crisis, Winston Churchill was decisive, inspiring, resolute and effective. Even when surrendering seems the rational choice, it often makes sense to fight on. 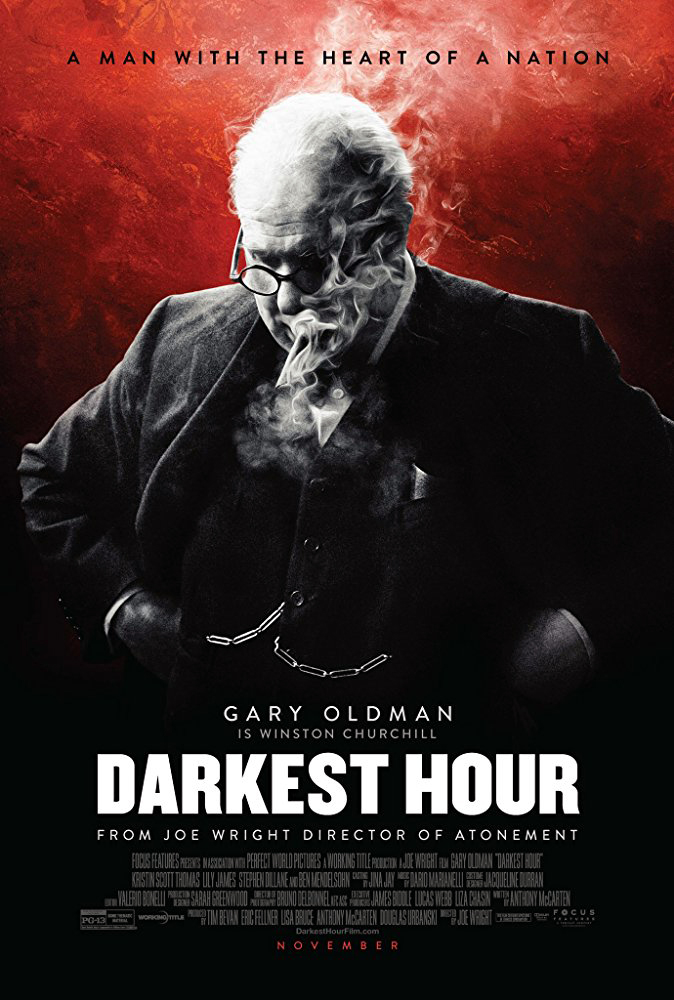